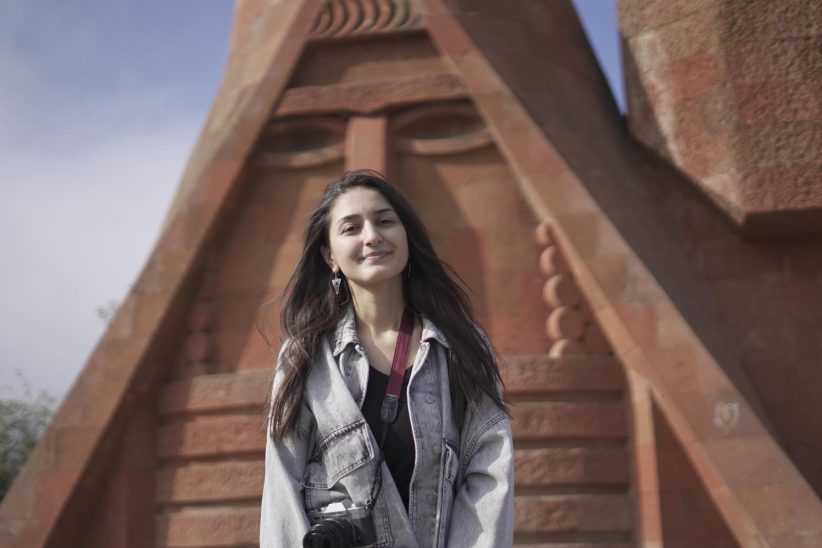 In the morning the weather in Stepanakert was excellent. Autumn, a light breeze, the sun warmed my soul. I decided to leave the shelter for a bit, and it seemed that there was no war at all. But our neighbors, of course, will not let you enjoy this break. Several explosions, and we are back in the hole. In school, I got a B in physical education, to be honest. If my teacher knew that I could run like that, she might change my grade.

The situation and I are both becoming more and more tense. The war continues, nothing changes, we are devastated. The sound of bombs became our crying baby at night, and in the morning – an alarm clock. The last days have been very difficult.

Today our market (bazaar) was bombed. Oh, how we love it. If you ask me, this is the most picturesque place in Stepanakert. You enter, on the left, several skillful women cook Zhengyalov Hatz. The most delicious in the city. The left used to sell DVDs and CDs of films and cartoons. I remember that I used to go there and look at them, I wanted to buy them. Then over time, somehow the covers on the discs began to fade. This was the era of the computers. And then there were large buckets of salted vegetables. And in the center, the most mysterious, and as sometimes it seemed, unattainable. This range of beautiful, imported fruits. They are not like the others. There are bananas, apples, pears with stickers. Not a speck of dust on them, beautifully sorted. I always thought: When I grow up, I’ll earn money, I’ll come and buy my grandmother fruits from this very line… It’s a pity that my grandmother did not live up to this moment when I can afford it… And then there are clothes, meat, and men playing backgammon. There you could see all the shades of the colors of the rainbow… So, our favorite bazaar was bombed… I don’t know what exactly they bombed with, they say – grad.

But the worst thing for me today was that I was forced to leave Stepanakert. For a day or two. My sister has been in Yerevan since the first days of the war. With relatives, but alone. Since none of my family can leave their jobs, they decided that it should be me. It was like this – no one asked me. For everyone, my “I want to stay” is just a whim. But this is really not the case. In fact, war is a period of revaluation of values, a chance to get to know people. But, first of all, a chance to get to know yourself. I’ve learned a lot about myself in the last 35 days. Today I was given the chance to feel like a refugee for one day. It’s an indescribably awful feeling. It seems that a dangerous moment has passed, security is ahead. But you don’t want to go ahead. How can this be? Doesn’t man act instinctively? On the one hand, this thrust back into the fire, and on the other, the vagueness of where you are going. Where to go? Who should I go to? I don’t even want to bother other people with my war… But the car is going, and no one asks you. Build your whole life, and lose it in a moment. Today has been my worst day since the war began.

I will continue to write about refugee life and tell a story from the last war, but now I will only say one thing: no security can replace my cozy basement if the enemy shells my house…

Azerbaijan Continues to Use White Phosphorus in Karabakh