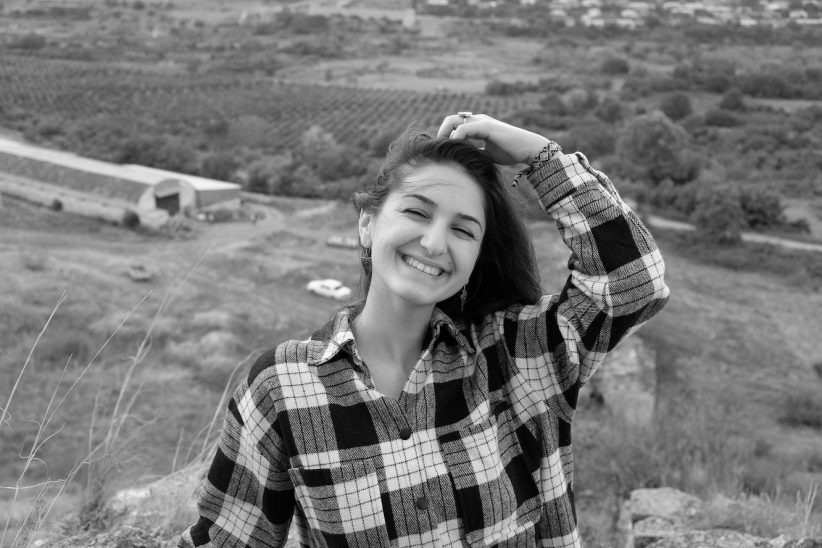 The third humanitarian ceasefire was as useless as the previous two. The only difference is that this time no one was surprised. Since there is no truce and the war continues, I asked my dad to bring me backgammon. Now, in my bomb shelter, you can hear not only the sounds of bombs, but also the sounds of the backgammon pieces, which sometimes drown out everything else. I remember spending a whole winter in Roots cafe playing this game, just like grandparents.

People in Artsakh love backgammon. When the weather is good, you can see elderly war veterans playing board games in the yard. I even have photos of them, I wanted to make a series about this. Usually, two sit in front of each other – the main characters, and three or four men stand side by side and watch the game. Everyone comments, “Oh, why did you make this move? Eh! You will lose!”

Today, I had to walk from point A to point B. The road was 15 to 20 minutes, but it seemed like a whole day. I think I have a phobia of walking around the city. It felt like something would fall on my head any minute. Every three meters I had a plan B in my head. If the bombing starts right now – where would I hide? I looked for basements, all sorts of open doors, anything, just not to hide from cluster bombs or a drone. I think I got 15-20 more gray hairs on my head in those minutes. To be honest, I was no longer afraid of death, but of my boyfriend, who, in case I stay alive, would settle scores with me because I didn’t heed his warnings and went out into the city, without a car, without a bulletproof vest, without a helmet.

Today I found little kittens in our yard. They were born recently, I couldn’t find their mother. I took them to our yard, introduced them to our dog Bima. Bima is very kind, he will not offend them. We fed them, and came up with a small place for them. In the evening I called my dad so that he would not forget to feed them. Now I am calm, because dad and Bima are looking after them.

And today, I also found an open store… I just can’t believe it! And in the store I found sour cream. In peacetime, I did not eat very much, and did not want to gain weight. Now, it’s like a New Year’s tangerine. I bought two. Although a few days ago a friend had sent me some from Yerevan. Today’s brand is “Mu-Mu”; this is produced in Artsakh.

Then I came to the shelter. I am sitting, thinking about writing something. Received a message. Again. One of the workers I worked with in Martuni was killed. He was killed while working. He was not a military man, just a civilian. And there was a family, children… Any loss is hard, but the loss of friends makes you feel everything on your skin. How many people do we lose every day…

Summing up today’s results, I want to say, to be honest, all this is very scary. But we cannot afford such luxuries as crying, being afraid… We ourselves decide what to do with this fear. Once in the film “Divergent” I heard the phrase that the main character says to the heroine: “Fear does not paralyze you, it wakes you up!” Now I dream to be the same.

A Glendale Doctor on the Karabakh Front