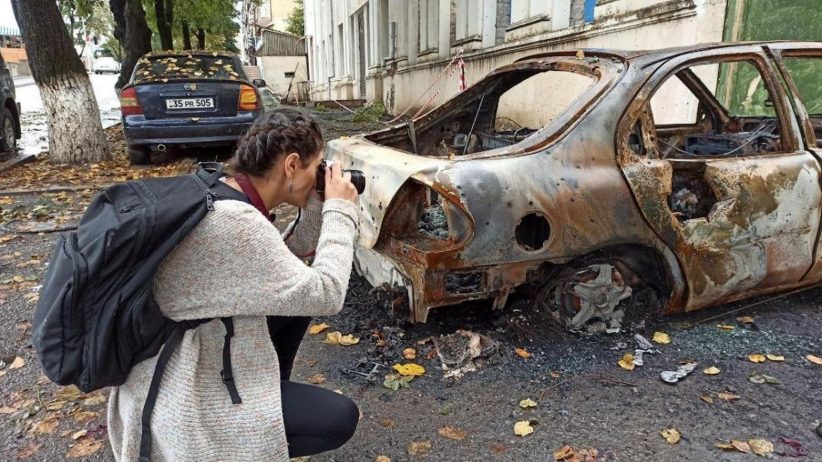 By Lika Zakaryan, from Stepanakert

For 25 days now we have yearned for peace. For 25 whole days we do not sleep in pajamas, we do not go to school or to the university, we fall asleep with Telegram channels and wake up with them. We do not take a shower (we wash as much as possible), we do not go to the store for bread and we do not complain about our salaries. If 24 hours are multiplied by 25 days, we get 600. 600 hours we live in hell. Some of us lost our homes, some of us were forced to leave our homeland. Some have turned into refugees for the second time in their lives (once after Baku and Sumgait). And some have lost their only loved ones. 600 Hours!

I haven’t seen my brother for 600 hours. From day one, he joined groups to help out on the front lines. His name is Albert, he is two years younger than me. We have been very close since childhood. After the first war, as you might expect, life was a little difficult. While jobs were being created, shops were opening, life was getting better – a certain time passed. My parents, like many others, left for Russia for a while to work. I was already in the first grade, and my brother was younger, so they took him, they didn’t take me, because I had to study. So we parted for a while. When he left, I began to miss him wildly. Missing this very whiny boy, who always took everything from me, who did not give me rest.

We had neighbors, their child had a toy limousine. So beautiful, big, black, and most importantly – new! During the 1999s beautiful toys were rare. So my little brother used to visit him all the time to play with this limousine. And this boy was not very nice to my brother. It hurt me inexplicably to see that. I was not an adult either, 5-6 years old. I promised myself that when I have my own money, I will buy him a limousine car.

I lived with my grandparents while my mom, dad, brother worked in Russia. Granny was such a strict, correct woman. She put me on the piano. Every day she gave me money for school lunch and for the bus to the music school and back (not even 50 cents all together).

A few years later, my grandmother came and said: “We are going to Russia for a month, we will see relatives and parents.” I couldn’t believe my ears. I ran into the room, took my money can and went up to my grandmother: “Grandma! Grandmother! Can we buy a limousine car for Albert and take him with us as a gift? Please!” And she said, “Darling, I don’t know, it’s so expensive.” “No, no, grandma! I have the money, you just let me buy it, he will be so happy…”

With these words I opened the can, and there were all these pennies (well, almost all) that my grandmother gave me for bus rides and lunches. “How?… Where from?… ” “Grandma, it doesn’t matter. Don’t worry, this isn’t someone else’s money, don’t think about it. These are all yours that you gave me.” Tears rolled down my grandmother’s cheeks…

There was a toy store not far from the music school. After almost every piano lesson, I went there, looked at the toys, and chose a limousine. Every time I looked and imagined that my brother would play with him. Oh! How happy he will be! The shop assistant and I even became friends. And so, I took my grandmother by the hand and went there with her, so pleased. I was about 9-10 years old. The limousine cost about $10 (the average salary back then was $40. I had almost $9. Grandma wanted to add the rest, but the seller did not allow: “If I had an option, I would give it to her for free. Please let this be my contribution.” I walked out of the store with a limousine in my hands, proud.

Arrived in Russia. First, to the city where some distant relatives lived. I went out with my grandmother and when I returned, my heart broke… One girl in this house took the limousine and sat right on it! Can you imagine? It broke down a bit… I won’t even tell you the level of resentment that I experienced… And here life hit me in the head, also for the first time.

Then we arrived. I met my brother. He was so happy. “Brother, I have a present for you. Forgive me, it broke on the way, but it was from the bottom of my heart … ” To be honest, he did not care at all. He was mad with happiness! And my mission was accomplished…

My mother says that when I returned back to Stepanakert, my brother would fall asleep hugging this limousine, missing me. This broken limousine became our little symbol, we still remember and laugh…

This story is not about me and Albert specifically, but about love for my brother. It is a special bond that is invisible and strong, occupying such a huge space in our hearts. Now I miss him as I did when I was a child. And he probably misses me. If he was reading this now, I would like to tell him one thing, “If the war made you sad, come back soon, I will give you a million limousines, I will heal all the wounds in your soul. You just come back as soon as possible…”

24th Day of War: No Diplomatic Solution Looms as Pashinyan Calls for Another Mobilization