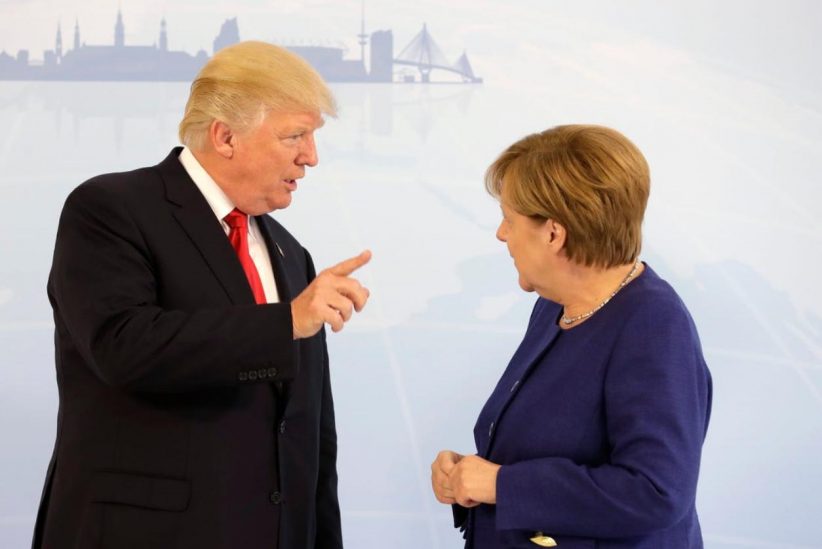 The article was published in the World Energy Weekly, a publication of Petrostrategies, a French think-tank specializing in energy issues.

Will the Nord Stream 2 project, which aims to establish a new direct gas link (of 55 bcm/annum) between Russia and Germany, trigger a political crisis between the United States and Germany? This question can be asked in view of the mounting tensions between the two countries in recent months, not only on the diplomatic, political, and economic fronts, but even on a personal level, in relations between US President Donald Trump and German Chancellor Angela Merkel.

The US Senate is currently debating expanded extraterritorial sanctions against Nord Stream 2, based on a bill introduced on June 4, 2020 by five senators, four of whom are Republicans and one Democrat. The bill is now being considered by the Senate’s Foreign Relations Committee. It aims to broaden the scope of the sanctions that the United States enacted against Nord Stream 2 in December 2019, causing work on the gasline to stop. In principle, the bill is even more likely to be passed than were the sanctions of 2019, as German-US relations have deteriorated substantially over the last six months. Furthermore, as the November 4 Presidential election draws nearer, promising a closely-contested outcome, it’s quite likely that neither Trump nor his Democratic rival Joe Biden will seek to oppose the expanded sanctions, as neither will want to be accused of weakness towards Russia. The first sanctions against Nord Stream 2 were proposed in May 2019; they were passed by the US Congress and signed by Donald Trump six months later.

Republican Senator Ted Cruz (Texas), the main promoter of expanded sanctions against Nord Stream 2 (he had already played that role in the case of the 2019 sanctions) claims that the gasline “poses a critical threat to America’s national security and must not be completed”. While the US sanctions introduced in late 2019 stopped pipelaying work on the gasline, he says, “Putin continues to try to circumvent those sanctions, and so this new bill will once and for all clarify that those involved in any way with installing pipeline for the project will face crippling and immediate American sanctions”. If passed, the expanded US sanctions will apply to “all vessels engaged in all pipelaying activities, as well as to those who facilitate providing those vessels, as well as to those who provide insurance, port facilities, or tethering services for those vessels, and ultimately to any company that provides certification for the Nord Stream 2 pipeline to begin operations”.

The proposed US sanctions are therefore targeting a much broader circle of possible targets than the measures introduced in December 2019, which apply only to firms engaged in laying the Russian gasline. To give an idea of the number of people and firms that could be affected, the BDI, a group of German industrialists (whose members admit that they are very worried), points out that 670 companies from twenty-five different countries have participated directly or indirectly in building Nord Stream 2 to date. Meeting behind closed doors on June 17, the Bundestag’s Economic Affairs Committee called on the German government to “develop and put forward proposals for a measured, clear reaction on behalf of Germany and the European Union” against expanded US sanctions targeting Nord Stream 2.

Sources of friction between Donald Trump’s United States and Germany have proliferated over the last few months. The latest was the news of the planned withdrawal of 9,500 US military personnel currently based in Germany, thus reducing the number of United States troops stationed there to 25,000. “We’re supposed to protect Germany from Russia, but Germany is paying Russia billions of dollars for energy coming from a pipeline”, Trump said recently. “Excuse me, how does that work?” said the President.

Trump regularly accuses Germany of not spending enough on its defense and of relying too much on American protection. Instead of being grateful, as the US President expects, Berlin has scuttled his plans. So Trump took it very badly when Angela Merkel torpedoed his cherished plan to hold a G7 meeting at Camp David. The chief executive of the United States regularly threatens to increase duties on German car imports to the United States.

In addition to these German-US frictions, the United States and the European Union have also clashed on a number of issues, starting with the taxation of the internet giants (Facebook and Amazon, among others), to which Washington is opposed (unless such a tax is virtually symbolic). On June 30, the EU angered Trump once again, when it failed to place the United States on a list of “healthy” countries whose nationals will soon be able to travel to Europe again. Moreover, Germany will probably seek to respond to possible expanded US sanctions by trying to work out a panEuropean response. Berlin assumed the Presidency of the EU on July 1, 2020, for six months. “New sanctions would constitute a serious interference in European energy security and EU sovereignty”, said the German foreign ministry on June 28. German Economy Minister Peter Altmaier slammed Washington for «escalating this sanctions threat, which is extraterritorial and thus in conflict with international law”. For his part, the EU High Representative for Foreign Affairs and Security Policy, Spain’s Josep Borrell (in a written answer to a Member of the European Parliament), said that the damage done to the EU’s economic interests by US sanctions weakens transatlantic unity and undermines a firm stance towards Russia’s actions. Borrell added that the European Commission is currently preparing a mechanism to thwart US extraterritorial sanctions.

For its part, Russia has constantly reaffirmed (through its spokesmen and officials) that Nord Stream 2 will be completed “at all costs”. Two ships belonging to Gazprom are waiting for the Danish authorities to give them permission to start laying 160 km of pipes in the Baltic and thus complete the line. They are expected to be given a green light in mid-July. It would then take the ships three or four months to lay the pipes for the last section of Nord Stream 2. In principle, if all goes well for the Russians, they should therefore be able to test the new gasline in late 2020 or early 2021, and then start commercial service during the first quarter or the spring of 2021. But that’s if all goes well, as the Danish authorities may raise some objections. For example, the Russian ships will have to drop anchor to ensure their stability, since they can’t use dynamic positioning (in accordance with a Danish request). Moreover, a Polish NGO has seized the opportunity to appeal to Copenhagen about the case, arguing that the use of anchors can be dangerous in waters where shells dating back to the Second World War are often found.