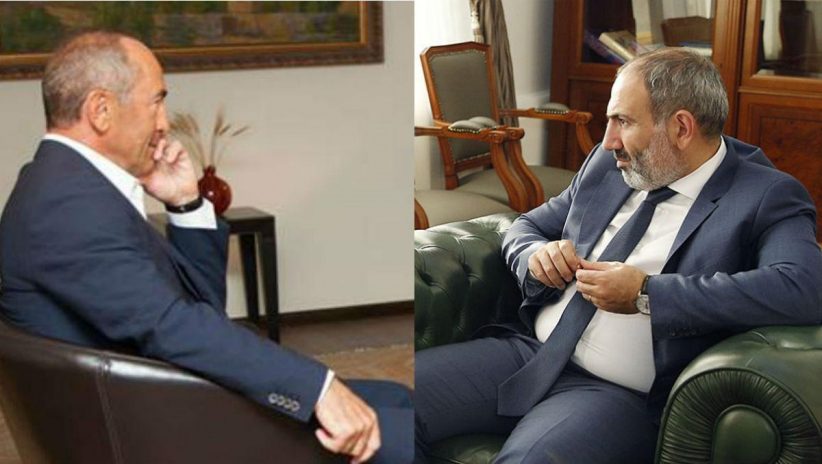 Three months after his election as prime minister, Nikol Pashinyan appears to be mired in a series of new disputes that come on top of the mountain of issues he inherited from his predecessors. The legal and increasingly political dispute with ex-president Robert Kocharyan has become a particularly acute issue, threatening domestic stability, as well as key foreign relationships. Can Pashinyan and Kocharyan put aside old grudges for the benefit of the country, at least temporarily?

On August 13, an appellate court in Armenia’s capital released Kocharyan from custody. The decision has sent shock waves throughout the new government and its supporters. Kocharyan was remanded in custody without bail 17 days earlier after the government charged him with “overthrowing constitutional order” following the February 2008 presidential elections.

According to Kocharyan’s lawyers, the appellate court’s decision cited Kocharyan’s constitutional immunity from prosecution for actions stemming from his responsibilities as president. In other words, the decision, if further legally sustained, means not only that Kocharyan would remain free pending investigation, but also that the current charges against him could be invalidated.

While specific government charges against Kocharyan have never been made public, they are connected to Kocharyan’s orders to the military in the run up to and following the introduction of emergency rule on March 1, 2008 when eight civilians and two policemen were killed in clashes in Yerevan. Both the government investigators and Pashinyan have argued that Kocharyan does not have immunity from prosecution, but this week an Armenian court disagreed.

Following the August 13 release, Kocharyan announced plans for a press conference the following day. Before the press conference could take place, however, several dozen activists – some from the small but still passionate Levon Ter Petrossian support base who have many grudges and complaints against Kocharyan — broke into the hotel conference room, chanting anti-Kocharyan slogans. According to media reports, the group included Pashinyan’s aide and driver Amigo Ghukasyan, as well as Armen Mkrtchyan, an advisor to Armenia’s police chief.

Shortly after the press conference was cancelled, Pashinyan went live on his facebook account, and without mentioning Kocharyan by name, said that “no power can challenge the Armenian people’s power,” pledging to return “stolen money to the last luma [penny],” while also promising that his government “would not fight others’ injustice with our injustice.”

Soon after Serzh Sargsyan’s resignation on April 23, ex-president Kocharyan began to emerge as the new government’s chief concern. In comments to Russian television, Kocharyan argued that Pashinyan should not be allowed to walk into the government and grab power “like a suitcase.” “People [in government] also have self-respect,” he said. On May 1, following those comments, the Republican Party prevented Pashinyan from getting elected during the first vote. The following day, David Sanasaryan, one of the protest leaders – and now head of the government anti-corruption Control Service – publicly urged Kocharyan to “pack his things and get out” of Armenia.

For two months little was heard from Kocharyan or about Kocharyan, until on July 3, the Special Investigative Service (SIS) publicized charges of “overthrow of constitutional order” against then-defense minister Mikhail Arutyunyan and subpoenaed Kocharyan to testify in the same case. At the time, Kocharyan’s spokesman responded that the ex-president was abroad and would return to Armenia on July 26. SIS agreed to wait. Kocharyan returned on the pre-agreed date and was immediately charged – no longer a witness, but a defendant.

There are indications that the government would have preferred that Kocharyan remain abroad, rather than to have him arrested. The subpoena was served shortly after Kocharyan left Armenia. After the charges were filed on July 26, Kocharyan had about 24 hours to leave Armenia before the court order for his arrest but refused, pledging to fight the charges against him in court instead.

Although the charges have to do with his duties as president, the charges have brought forth public expressions of outrage over Kocharyan’s personal wealth, accumulated during his presidential years, as well as official policies which were then and continue to be a focus of anger and resentment.

As Hrant Mikaelyan of the Caucasus Institute argued this week, Kocharyan has become larger than life figure for many former oppositionists who are now part of the Armenian government. “Kocharyan was heavily demonized by opposition media while he was president and his eccentric style contributed to that,” Mikaelyan wrote. “In reality, Kocharyan has few real tools to return to Armenian politics… and his return to political power is all but impossible.”

But developments since Kocharyan’s arrest must have added to the young government’s concerns. On July 31, Russian foreign minister Sergey Lavrov publicly criticized Pashinyan’s government for arresting Kocharyan (without using his name). Lavrov said that the Kremlin now distrusted the Armenian leadership because “its actions diverged from its words.” Arrest of an ex-president in the former Soviet space is obviously viewed as a bad precedent by the Russian leadership. Russian officials were also irked that together with Kocharyan, the Armenian government charged retired Gen. Yuri Khachaturov, now serving as secretary general of the Russia-led Collective Treaty Security Organization. Khachaturov was released on bail after Lavrov’s phone call to his Armenian counterpart.

In the following days, some 46 members of Armenia’s parliament, mostly members of the Republican Party, appealed to the government to release Kocharyan from pre-trial detention. Their request was turned down. Still, rumors circulated that Kocharyan was gearing up for a political fight, even buying up television channels.

While Kocharyan remains an unpopular figure in Armenia, the remaining Republicans and others interested in retaining the old power structures would find him a possible means to a structured challenge to Pashinyan. Kocharyan might be able to mobilize the former ruling parties in parliament, whose support is required for an early parliamentary election to take place. For this to happen, Pashinyan would first need to resign and then the parliamentary majority would need to twice fail to elect a replacement. Starting in May 2019, power balance would shift to the parliamentary majority, as it would gain the right to vote Pashinyan out of power and select his replacement. Thus, Pashinyan’s final deadline for new elections is next spring.

Is a deal possible?

On August 17, Pashinyan will hold a rally in central Yerevan to mark 100 days as prime minister. A strong turnout would be a reflection of Pashinyan’s domestic legitimacy and an opportunity for him to revamp key relationships and where necessary, correct course – possibly also an opportunity to explain to the public why he might make course adjustments.

While Kocharyan’s and Pashinyan’s ultimate positions and mutual antagonism may remain irreconcilable, a kind of a “cease-fire” could be agreed as the current standoff appears to be a product of a series of miscalculations. Kocharyan’s comments on Pashinyan in April were read as a sort of declaration of war but were unlikely that. Kocharyan is known for ‘misspeaking’. Pashinyan’s calculation that Kocharyan would prefer life abroad to prison in Armenia have so far proven wrong. Finally, efforts to put Kocharyan in prison – or at least to pressure him to pay his way out of prison – are encountering serious obstacles.

It is unclear, which “Minsk Group” might mediate such a deal, as a Pashinyan-Kocharyan meeting seems unlikely, but a deal’s contours are fairly clear. [And if in fact there was a deal with Serzh Sargsyan to prevent prosecution, then the possibility of political deals is not out of the question.] The government could temporarily freeze prosecution against Kocharyan, who in turn would pledge to stay out of politics at least until next spring. This would likely lift any Russian pressure against Armenia, help ensure the Republican-dominated parliament remains pliable and would give Pashinyan breathing space to work towards new elections.

Who knows, perhaps such a cease-fire could also open the way to longer-term commitment for a full-fledged March 1 inquiry and other past cases of government abuse, all sorely needed, and all helpful for Armenia to move forward.

Dashnaktsutyun Does Not Rule Out Cooperation With Kocharyan

Serzh Sargsyan to Be Questioned by Special Investigative Service