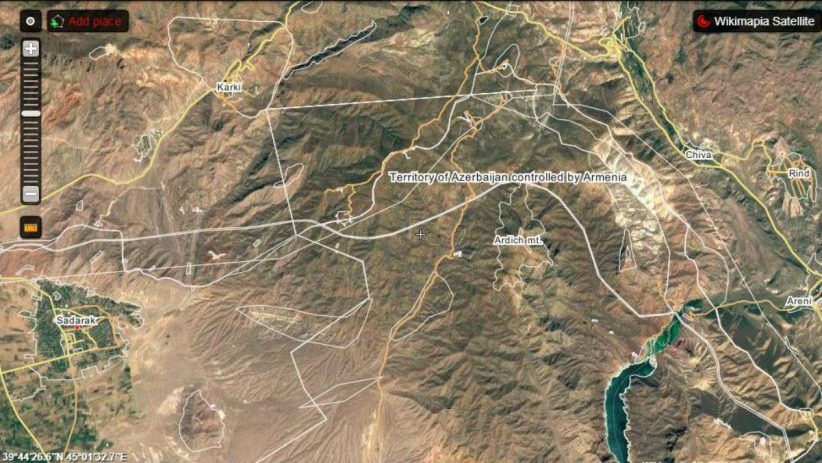 According to new satellite imagery just published by Razm.info, in the last two weeks Azerbaijani forces built new roads and trenches in several areas of northeastern Nakhichevan that were previously in the no-man’s land. Although the move occurred without fighting, the size of the territory acquired by Azerbaijan, between 10 and 15 square kilometers, is larger than what Armenian forces lost during the April 2016 war and represents the largest single Azerbaijani advance since the 1994 cease-fire. These territories are just a few kilometers from Armenia’s main north-south highway that connects Yerevan with Vayotdzor, Syunik and Artsakh.

The move occurred about a week after Nikol Pashinyan was voted in as prime minister on May 8 and just days after Davit Tonoyan replaced Vigen Sargsyan as defense minister on May 11. Significantly, on May 16 Ilham Aliyev visited Nakhichevan and made threatening statements against Armenia. Tonoyan, accompanied by the newly-appointed foreign minister Zohrab Mnatsakanyan, visited the Nakhichevan border on May 18. On May 20, Azerbaijan reported one of its servicemen killed in Nakhichevan. In response the Armenian defense ministry said that “in recent weeks, at certain sections of the Armenian-Azerbaijani border Azerbaijani forces are conducting active engineering works to improve and move forward their positions.” The defense ministry said that such moves “could not be left unpunished.”

On May 22 an Armenian servicemen was shot and killed at one of the Nakhichevan area outposts. On May 24, Pashinyan replaced Gen. Movses Hakobyan as Chief of the General Staff. But instead of the widely-anticipated promotion of first deputy chief Gen. Onik Gasparyan, Pashinyan appointed Gen. Artak Davtyan. Previously a long-time chief of operations at the General Staff, Davtyan since last year commanded the 5th Army Corps that is responsible for a section of the Nakhichevan border impacted by Azerbaijani moves just weeks earlier. Hakobyan was appointed Armenia’s chief military inspector.

Unusually, Davtyan’s appointment was publicly criticized by former deputy defense minister Artur Aghabekyan. Armenia’s leading investigative journalist Edik Baghdasaryan for his part said that Davtyan bore responsibility for the setback in Nakhichevan. According to social media postings, Azerbaijan’s redeployments spread concerns in nearby border villages, particularly Areni, from where a new Azerbaijani position on Mt. Kyzylkaya about 3 kilometers away can now be observed with binoculars. In response, the Armenian defense ministry has attempted to play down the significance of the moves, emphasizing that they occurred on Azerbaijan’s side of the border.

The last argument appears to serve as justification for inaction. While Google Maps and other cartographic applications reflect the administrative line between Soviet Armenia and Soviet Azerbaijan, this line remains an informal reference point until it is formally demarcated by the two independent republics. In various border areas, including Nakhichevan, there are parts of Soviet Azerbaijani territory held by Armenia, as well as parts of Soviet Armenian territory held by Azerbaijan. The actual border is demarcated by military outposts and trench lines that are also clearly visible in Google Maps.

For years both sides have jockeyed for advantage on this real border. Particularly, in mountainous areas such as in Nakhichevan or north of Artsakh, warmer temperatures and melting snows in late spring – early summer provide opportunities for moves to capture more favorable positions. Thus, in 2014 and 2015 Armenian forces made substantial territorial advances at another section of the border with Nakhichevan. And in 2008 a similar redeployment occurred in northern Karabakh. Elsewhere, Azerbaijani forces also moved their positions closer and higher.

Until recently both sides have avoided escalating tensions in Nakhichevan. A little-known fact is that in May 1992, the then Nakhichevan leader Heydar Aliyev negotiated a separate cease-fire with Armenia, ending fighting in that area, even as large-scale fighting continued in Karabakh for two more years. In recent years, Azerbaijan began building up its military forces in Nakhichevan, which now include long-range artillery bought from Russia, Ukraine, Israel and Turkey and capable of firing at 90 and more kilometers. Never shy about threats, Ilham Aliyev and other Azerbaijani officials said they could launch rocket attacks at Yerevan, about 70 kilometers away from Nakhichevan border.

Earlier this month, as Pashinyan visited Nagorno Karabakh, Azerbaijani government-friendly influencers in social media launched a campaign that called for rocket attacks on Stepanakert. It featured high school and university students with pictures of hashtag #XankendiniVur (‘Hit Stepanakert’ in Azerbaijani).

While Azerbaijani officials have not commented on developments in Nakhichevan, pro-government media has seized on Armenian reports of Azerbaijani advances, exaggerating their impact as “taking control” of parts of Armenian territory. In both Azerbaijan and Armenia politicians and media frequently conflate the ability to “observe” an area with being able to “control” it.

Still, Azerbaijan’s moves in northern Nakhichevan are not insignificant militarily. The Azerbaijani government seemed disoriented by the pace of political developments in Armenia. But now Aliyev took advantage of Armenia’s government transition and the associated disarray in the chain of command. It remains to be seen, if the now opposition Republican Party will make this a significant political issue as it considers the new Armenian government’s program in parliament next week.

The Armenian Diaspora Will Not Be An ATM Machine