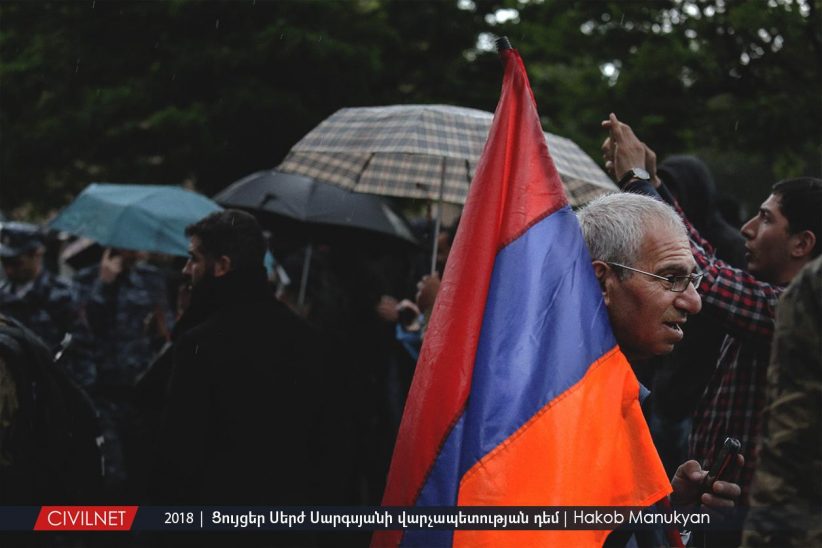 CivilNet continues to cover the protest rallies in Yerevan with direct video and text updates from the ground as they happen. On April 20, in Yerevan’s Republic Sq, during the evening’s public rally, Nikol Pashinyan laid out a 4 point plan – 1. Serzh Sargsyan should resign his post as Prime Minister, 2. Parliament is to elect a ‘people’s candidate’ as Prime Minister, 3. A transition government is established, 4. New election to be triggered after a vote of ‘No Confidence.’ This would allow for a snap election to take place.

You’re the victors today because you’ve stood courageously.
When this concludes the way we want it to, when history books record this movement, today will be the day of victory.” — Ararat Mirzoyan, YELQ alliance deputy

Newly elected president Armen Sargsyan & opposition leader Nikol Pashinyan having a conversation at #rejectSerzh protest in the Republic Sq, amidst the huge group of protesters
The reporters have been asked to keep the microphones away, making it hard to hear their conversation.

“Pedal up, reject Serzh” bike procession has started in Yerevan.

Protest in Denmark in front of the Armenian Embassy.

Former parliament member from the Republican party Arakel Movsisyan and his strongmen blocked the motorcade coming from Etchmiadzin. They forced the drivers of two trucks to block the road leading to Yerevan, they forced out another driver from his car, shoved him into a building. The police watched the whole thing, without interfering. Movsisian was leading the whole operation. Radio Liberty

Under the leadership of Nikol Pashinyan, the rally is currently at the Koryun-Mashtots intersection, moving towards the President’s Residence.

“I am very concerned about peace in #Armenia and the future of these very talented, and my beloved, people. I urge the Armenian authorities to immediately start a dialogue with the protesters and listen to them. Generally, don’t listen and imitate Moscow much and be closer to your citizens. you will only benefit from it. ” Mikheil Saakashvili

Serzh Sargsyan has provided a response to the open letter from the Luys Scholars. Here is a portion of that response:

My appointment as prime minister was conditioned by a simple fact: in this region of complex geopolitics and period of new challenges, we have to ensure the country’s safe development and continue efforts towards a dignified settlement of the Karabakh issue.

I believe these problems are solvable, after which other figures can assume the country’s leadership. In that great cause we will rely on the Luys community’s potential as well.

At the rally in Berlin, Arsinee Khanjian reiterates that this movement must continue in a calm manner until its resolution.

According to the NSS, individuals associated with Jirair Sefilian and Sasna Tsrer are creating home-made explosives and creating an atmosphere of fear.

Activist Armen Grigoryan has been detained when officers and masked men entered a cafe he was in and took him away.

A demonstration was organized in Berlin in front of the Armenian Embassy, where actress, Arsinee Khanjian was present.

According to CivilNet reporter Tatul Hakobyan, the march in Avan stretches 1 kilometer long.

Demonstrators in France Sq are moving towards Moskovyan St.

The Ministry of Justice has announced that if the public gathering does not voluntarily disperse within the given timeframe, the police have the right to disband the gathering.

Hovsep Khurshudyan has been detained at the Yerevan Police Station, according to YELQ.

We are conducting marches in line with the Laws of the Republic of Armenia, says Nikol Pashinyan.

Founder of the rock band, ‘The Beautified Project’ is streaming live from London as part of a protest march in front of the Armenian Embassy.

Police have blocked the highway between Ararat and Yerevan, where protesters were making their way to Yerevan in cars.

Zaruhi Postanjyan was providing live footage of the residents marching in Kapan in support of #RejectSerzh.

The Defense Ministry has requested for the marches to not assemble near the Ministry of Defense compound.

The marches have reached Gayi St and are heading to Avan.

The Human Rights Defender of the Republic of Armenia has weighed in by stating that he will work to ensure a peaceful settlement to the situation.

Nikol Pashinyan responds to Serzh Sargsyan’s request to sit for a dialogue by saying they are ready to sit at a table to discuss the grounds of Serzh’s removal.

The police have issued a statement saying that they’ve made a decision to stop the rally.

“In the current situation, the constitutional rights and public interests of others have become prevailing, in other words, it is otherwise impossible to prevent their disproportionate restrictions because many police alerts, warnings and legitimate demands have been categorically ignored by the assembly / rally leader and participants.”

Serzh Sargsyan has issued a statement to Nikol Pashinyan to immediately sit and begin a dialogue. In the statement, he acknowledges the right of the people to protest. He goes on to say, however, that these demonstrations and have crossed a line, which he says have been detailed by police, and have impacted the day to day life of the citizenry of Armenia, which, Sargsyan believes, is cause for concern. He ends the letter by saying that these issues, and the potential for more issues, is why Nikol Pashinyan should immediately come to the table to have a dialogue.

61 Luys Foundation beneficiaries — graduates of the world’s top universities, who received scholarship support from the government-affiliated foundation, have written a public letter to Serzh Sargsyan, calling on him to honor his word and resign from the premiership.

CivilNet’s Tatoul Hakobyan is reporting that Nikol Pashinyan is now working to bring the participants to the rally together to a more secure location to continue the march.

Nikol Pashinyan announces that they will agree to the demands of the police and stop this gathering. He also goes on to announce that they will start a new gathering, elsewhere.

The police have stopped the march by using brute force.

Police are demanding an end to the marches. Pashinyan has asked for 20 minutes to think on the request.

Nikol Pashinyan is calling on demonstrators to block the roads in 7th- Massiv and to not allow the police to block the march.

Police are detaining demonstrators in a rough and physical manner.

Police have begun to follow the demonstrators and marches in and effort to make them stop. They are also working to isolate Nikol Pashinyan.

This video comes to us from an individual who is at the scene of the march. You can see police officers physically damaging the car with their batons.

Deputy Chief of Police, Osipyan has informed NIkol Pashinyan that their office has received complaints and reminds him that the march is illegal. He goes on to say that the freedom of movement for the people is being restricted by the marches.

Pashinyan replies that according to the Law of Freedom of Assembly, a group of up to 100 people does not need to request permission.

Osipyan announces that the marches must stop.

Today’s march began in Nork, in the 7th massiv, near the ‘Nor Doon’ store. The weather is rainy here in Yerevan.

The participants have been welcomed by the residents of the Nork community from doorways, balcony’s and window’s as they pass by.

Yerevan Deputy Chief of Police, Valeri Osipyan has been seen in Nork at the start of the march. The police are trying to hamper the march.

Nikol Pashinyan has informed people that he understands that many vehicles of the participants of the movement have been damaged.

He further goes on to say that he has an idea of how to use these vehicles as part of the movement in ‘a worthy manner’ and he will provide the location and time of that act if his idea is accepted by the people.

Serj Tankian has provided a video statement below where in it he has a message for the youth of Armenia. He has also written a song for them.