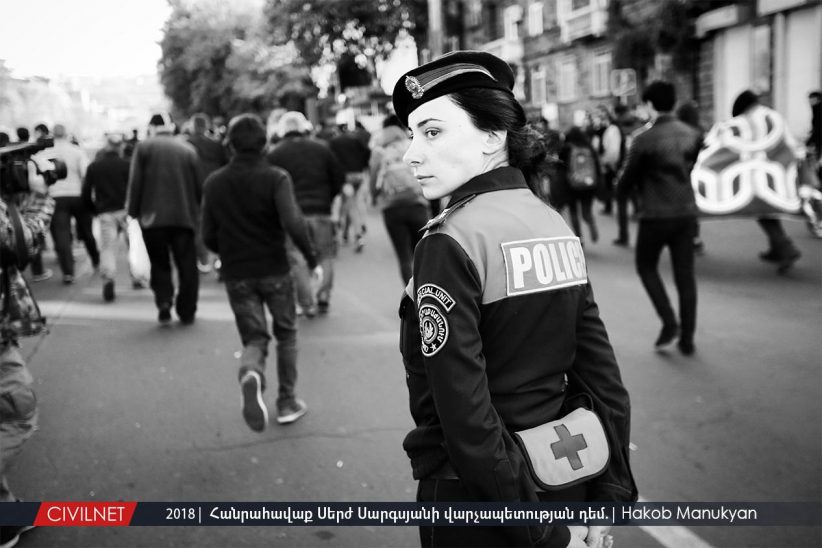 Armenia’s Police have once again issued an announcement on their website warning protest organizers not to continue what they consider illegal rallies.

The announcement comes after days of demonstrations in Armenia’s capital of Yerevan where protesters are demanding that former President Serzh Sargsyan step down and not become the country’s next Prime Minister.

Demonstrators and police clash amid protests in Yerevan

Armenia’s Police say that the rallies organized since April 13, 2018 by Member of Parliament Nikol Pashinyan have resulted in road closures in Yerevan, hindrances to the work of various organizations, and the halt of public transit systems. The announcement also mentions that protesters have disobeyed the lawful demands of police officers and have engaged in violent acts of mass disorder.

The announcement mentions that despite the fact that there have been unlawful acts by protesters who have caused continuous public disorder, the police, acting under Article 78 of the Constitution, have for three days attempted to restrict the participants through verbal warnings and presentation of demands which have all been ignored.

The announcement continues that according to section 1 of Article 5 of Armenia’s constitution, “Freedom of Assembly” can be restricted during certain circumstances and the Police believe that the above mentioned unlawful acts are cause enough to limit the demonstrations.

Taking into account recent events and acting under Article 33 of Armenia’s law, the Police have made the decision to bring to a stop all demonstration and to demand that organizers communicate this decision immediately to the participants.

“In the event that there is a failure to meet the mentioned demand, the police are authorized under law to use special measures to disperse the rally.

Thus, we are warning protest organizers to not continue illegal demonstrations in order to avoid special measures that will be taken by police to carry out their responsibility.”

Demonstrators and police clash amid protests in Yerevan