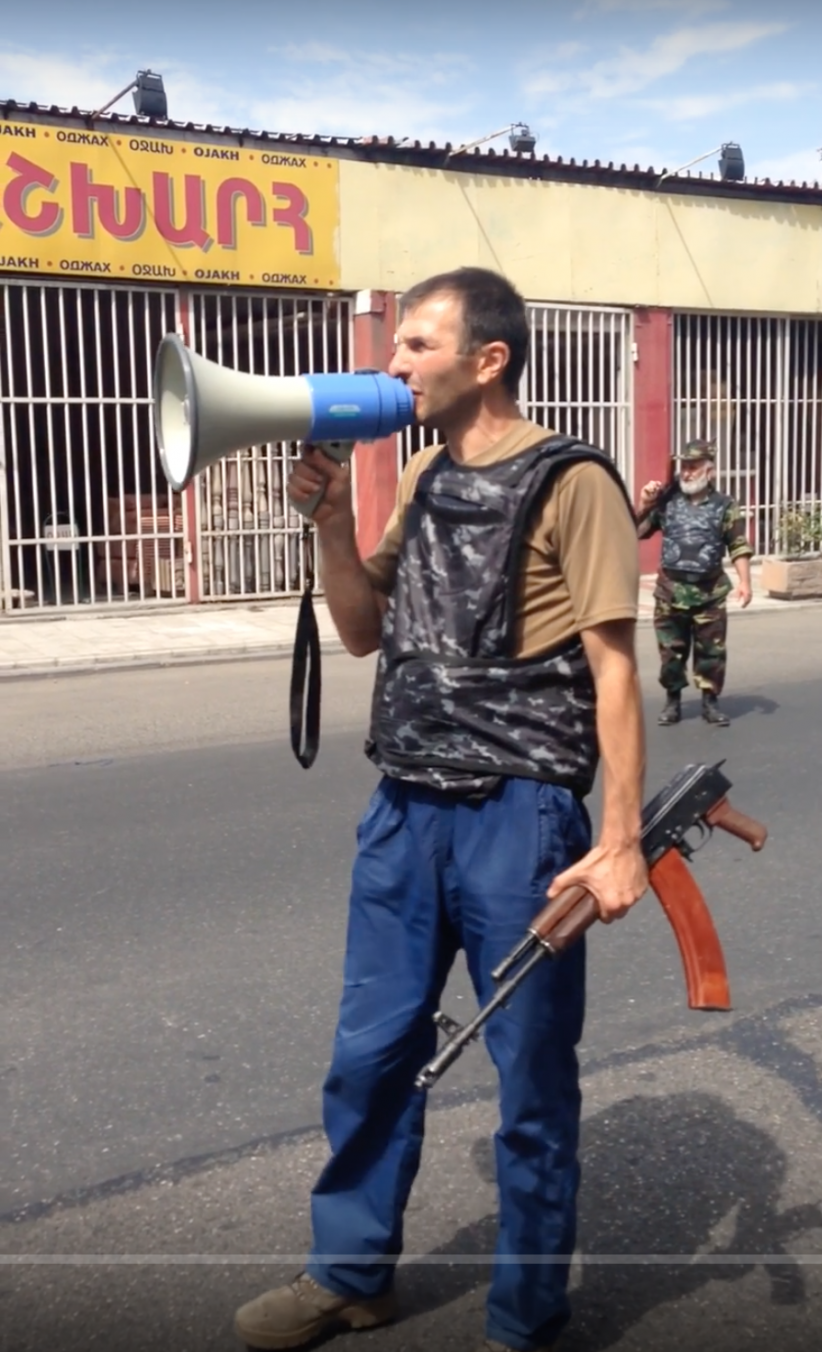 BBC’s South Caucasus correspondent, Rayhan Demytrie on the Daredevils of Sassoun and a particular demand the group voiced before putting downs arms on July 31; A call to fight Russian colonialism in Armenia.

Armenia has maintained a special relationship with Russia since the Soviet Union collapsed in 1991, but a recent hostage siege revealed an undercurrent of anti-Russian feeling.

For two weeks last month gunmen held hostages at a police compound in the capital Yerevan.

Thousands of anti-government protesters rallied every night in support of the gunmen and many accused Russia of meddling in Armenia’s affairs.

“Today all the processes in our country are governed from outside. I am speaking about Russia,” said Tigran Khzmalyan, addressing a crowd on the steps of Yerevan’s Opera House on 31 July.

With a loudspeaker in one hand, and his smartphone in the other, he was reading a message published online by the armed group known as the Daredevils of Sassoun.

Armenia hosts a Russian military base and considers itself Russia’s strategic ally in the Caucasus. Armenian-Russian friendship, based on common Orthodox Christian roots, dates back centuries.

Much of the Armenian economy is Russian-owned or controlled, including the energy sector and railways.

Daredevils of Sassoun – named after a medieval Armenian epic poem – seized a police compound on 17 July, killing one policeman and barricading themselves inside with hostages.

“We want the people, and the international community, to realise that this is a national liberation movement against Russian colonialism,” their message said.

Soon after that Mr Khzmalyan told the crowd that the group had surrendered. “Heroes, heroes!” people cheered.

Many of the Daredevils are veterans of Armenia’s 1990s war with Azerbaijan over Nagorno-Karabakh. The disputed mountainous territory is officially part of Azerbaijan, but held by Armenian separatists.

Many Armenians sympathise with their cause, including a call for President Serge Sarkisian to resign. He was rumoured to be willing to surrender some Armenian-controlled territory to Azerbaijan in exchange for a peace deal.

For Tigran Khzmalyan, the group’s call to fight against “Russian colonialism” was the most important message to emerge from this crisis.

He said many Armenians “realised that the real enemy is not the local administration, which is manipulated by Moscow – the real target is the Kremlin, it’s the KGB [Soviet-era secret police]”.

There was renewed fighting in April between Armenia and Azerbaijan, in which an estimated 200 people – soldiers and civilians – died. It was the worst outbreak of violence in more than 20 years.

The Kremlin helped to broker a ceasefire on 5 April, but Russia’s supply of arms to both Armenia and Azerbaijan has reignited a debate about Armenia’s relationship with Russia.

On 14 April demonstrators marched on the Russian embassy in Yerevan and threw eggs at it, angered by what they considered Russian duplicity.

Russia has sold more than $4bn (£3bn) worth of weapons to Azerbaijan in recent years. But Russian Prime Minister Dmitry Medvedev has argued that supplying arms to both sides acts as a deterrent, creating a “balance of forces” in the region.

In a deal earlier this year Russia agreed to provide a $200m loan to Armenia to buy Russian weapons, including multiple-launch rocket systems and anti-tank missiles.

President Sarkisian is expected in Moscow for talks on Wednesday. He may come under pressure to do a peace deal with Azerbaijan.

But wary of growing unease at home he has publicly stated that there is no room for compromise.

“Nagorno-Karabakh will never be part of Azerbaijan. Never. I repeat again – it is out of the question,” he said recently.

BBC visits Azerbaijan’s side of frontline

A Look Inside Cafesjian Center for the Arts: Marcos Grigorian Exhibition