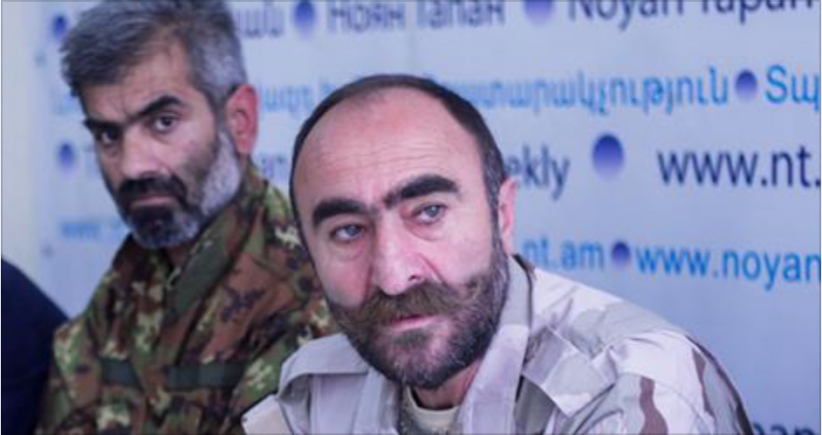 At around 5:30 a.m. this morning, an armed unit calling themselves Sasna Dzres (Daredevils of Sassoun), members of the Freedom Fighters Union took over the Erebuni police station in Yerevan. The group entered the police station by driving a vehicle through the door. At the time, eight policemen were at the station, however an officer with hypertension was evacuated shortly by ambulance, the remaining seven are being held hostage. Reportedly, the Chief of Yerevan Police, Valery Osipyan, is also being held hostage after entering the grounds for negotiations.

A member of the armed group, Pavel Manukyan, said over a telephone conversation with the media, that there was an exchange of

fire during the takeover. Manukyan confirmed that two of his unit had sustained injuries as a result. An armature video that emmerged later in the day, shows heavy gunfire being reciprocated with the fire visible in the night sky of the Erepuni district and intensive gunshots being heard in the distance.

The National Security Service of Armenia has confirmed that one police officer was fatally shot and two others wounded as a result of the initial fire exchange.

The group is demanding the resignation of President Sargsyan and his office, that a temporary committee be set up to direct the country, that Jiray Sefilian and all political prisoners be set free. They have also demanded that journalists be allowed in but authorities have refused their demand.

In a video statement released by the group approximately three hour into the siege, members of the group addressed the people saying, “Dear friends, citizens, Armenian nation, it has begun, we are doing this for you, we have resorted to this step for you. Go out to the streets! We demand that all political prisoners be set free, Jirayr Sefilian, Gevorg Safaryan, Valodia Avedisyan, Shant Haroutynyan and friends. Everyone, with no exception. And with the precondition that they be brought here. Armenian people, it depends on you… go out to the street. We are a single unit and we cannot reach our goal alone. There is no other way; we had to resort to this step. Our request is that you not leave us alone in this matter for which we are putting our lives at stake.” The group has announced that they are ready to retaliate if the police take action and have no intention of surrendering.

Situation in the country

Throughout the day, the situation in Yerevan has been tense. The road leading from Tigran Mets avenue to Sari Tagh area is closed. Police officers stand at the crossroads.

A water cannon and armored police vehicles have been sighted at several locations.

Roads leading to Yerevan have been blocked from all directions, cars are being searched and turned back.

Members and sympathizers of Jirayr Sefilian’s Founding Parliament Party have being arrested without grounds.

The situation has escalated in Freedom Square. The police have beaten and arrested citizens and activists.

Earlier is the day Facebook was inaccessible and the websites of media outlets reporting on the developments were being shut down.

Sefilian is a Karabakh war veteran, an outspoken campaigner for regime change in Armenia and someone who has adamantly campaigned against any territorial concessions to Azerbaijan. Sefilian’s most recent clash with the authorities came right after the 4 day war in Nagorno Karabakh, in early April of this year, when Sefilian called the authorities in Yerevan out on the loss of 800 hectares of land. President Sargsyan only announced about the lost territories in a conversation with journalist on the plane on his way back from the first meeting with his Azerbaijani counterpart on May 16, while prior that date, he had been denying considerable territorial losses.

The Lebanese born activist is the leader of the opposition Founding Parliament party and as recently as on June 11th, Sefilian had announced plans to set up a new opposition movement called the National Resistance Committee. “We have a treacherous government, and must create an alternative [to it] and take over the function of governing the country with the help of the people and the army as soon as possible,” he declared.

Jirayr Sefilian and six others were arrested and charged with illegal arms possession and trafficking on June 20. On the day, President Sargsyan was in Saint Petersburg discussing the Karbakh peace process with his Azerbaijani counterpart in what was the second meeting of the Armenian Azerbaijani presidents since April.

Sefilian has been sentenced to 2 months imprisonment awaiting trial. Last Sefilian was arrested in April of 2015, for calling on a rally prior to the 100 anniversary of the Genocide commemoration, for insinuating public disorder.

These are Not Jihadists, These are People who Love Life