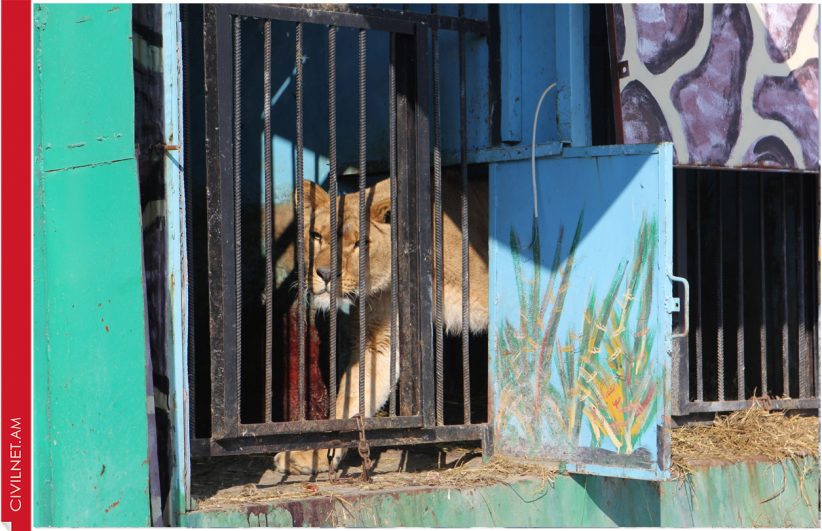 On Friday, January 22, a press conference was held in Yerevan to provide an update on the animals living in a private ‘zoo’ in Gyumri, Armenia’s second largest city. The situation has gained international attention in recent days, particularly in response to an article in a UK publication, the Daily Mail, which has gone viral since its publication on January 19.

The so-called ‘zoo’ consists of two bears and three lions living in tiny cages with minimal food and no enrichment. The Daily Mail article has raised widespread awareness among Armenians and non-Armenians alike who are now expressing outrage and concern over the animals’ conditions, as well as the desire to help. While some consider this attention to be ultimately positive, the article remains full of misleading inaccuracies and inflammatory statements that others involved consider to be damaging.

Since October, a number of organizers and volunteers in Armenia had been working to improve the situation for the animals — but their efforts were not included in the story. Karine Panosyan, Education Officer at ProPaws, told Civilnet that the Daily Mail had contacted them about the story in October, but it was not until now that the piece was published, thus failing to mention the fact that people had been working on it in the meantime.

According to Serda Ozbenian, Executive Director of the Armenian Environmental Network, this implication of complete negligence was the most harmful inaccuracy in the article, which claims the animals were “left to rot.”

As she told CivilNet, “animal protection organizations and activists in Yerevan and Gyumri have been in direct contact with the owner of the zoo for months and were working with him to remedy the situation.” The owner is reportedly very ill.

Ozbenian, like others involved, has many years of experience working with animals in captivity. Because dealing with these issues often requires sensitivity, much of their work is done behind-the-scenes. She explained that, after the explosive publicity brought on by the DailyMail article, “many individuals and organizations saw the situation as ‘hopeless and urgent’ and jumped in to help. Although it’s nice that folks jumped in, they did so without ground truthing which created chaos, which I am still working on fixing.”

Before the article, there had already been discussions with reputable organizations that would potentially provide sanctuary for the animals. In the past couple days, more have been added to the mix.

Panosyan said that the bears will most likely go to a sanctuary in Romania, but the situation for the lions is still being arranged. There are multiple invitations on the table and they are researching to choose the best option.

Panosyan believes that the publicity has had a positive effect overall, and said that the best way for people in the international community to help would be to send funds. The official crowdfunding page is on indiegogo.com.

Gyumri-based volunteer Arsen Vardanyan, who has been heavily involved with caring for the animals, spoke with CivilNet at the press conference and offered to be a guide for anyone who wishes to visit the animals in person.

Those who are wondering about the guinea pigs mentioned in the Daily Mail article need not worry — there are no guinea pigs on display. The article’s mention of the International Animal Rescue also remains a mystery even to that organization itself, which has since published a statement denouncing the false claims of its involvement.

While observing the extreme amount of attention that has recently come to this so-called ‘zoo,’ it is necessary to remember that this is not an isolated incident. Captivity of wild animals and their display in privately owned facilities is a wider issue that the activists have been trying to address. On Thursday, January 21, they met with the Deputy Minister of Ministry of Nature Protection of Armenia, Khachik Hakobyan, and head staff. Their meeting resulted in the formation of a government-supported Committee for the Protection of Captive Animals in Armenia, which will create limits and requirements for private zoos.

CivilNet will continue to follow the situation in Gyumri.