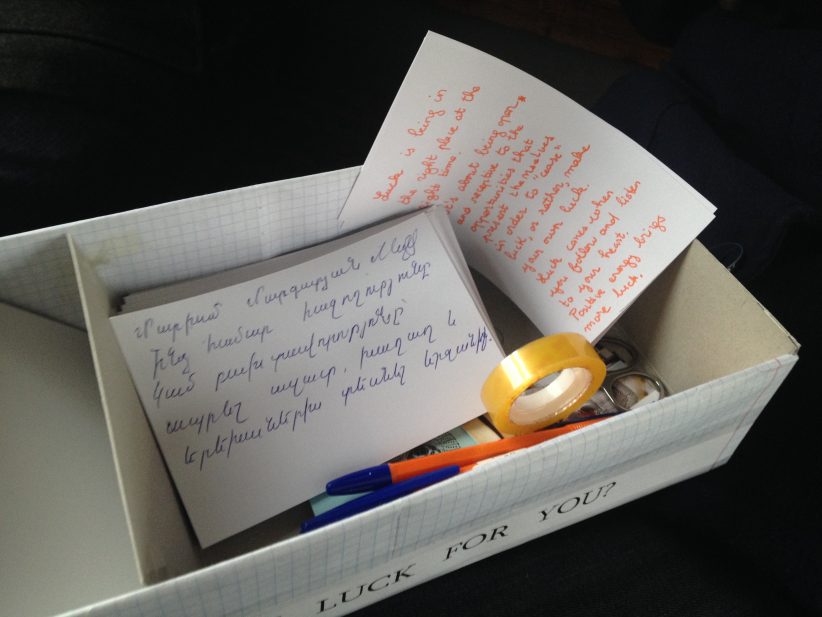 What is luck for you?

Three weeks ago, an artist from Stuttgart decided to perform an unexpected artistic and social experiment on the Yerevan-Gyumri train. Barbara Karsh-Chaïeb had been doing an artist residency at AKOS for a little more than two weeks when she heard about HAYP Pop Up Gallery’s exhibition project on the train, and decided to get involved.

From October 28 to November 1, HAYP Pop Up Gallery organized a series of artistic performances on the Yerevan-Gyumri train, in collaboration with local and international artists and performers. Amongst dancers, musicians, and singers, a few more experimental performances caught the traveler’s eye. Barbara Karsh-Chaïeb’s was one of those.

An active artist in Stuttgart since 2001, Barbara Karsh-Chaïeb finds her inspiration in historic events, special characteristics of localities, and personal memories. She works with these sources of inspiration and develops them into tangible installations. “Most of the time, it’s a work in progress – observing, assimilating, collecting… before integrating what I collected into special exhibition spaces,” she explains.

This time around, Barbara Karsh-Chaïeb titled her interactive performance “Train Office (a meeting point for ephemeral memories)” and worked on it for three days, while riding the train back and forth between Yerevan and Gyumri.

Her “train office” was in fact a little cardboard box of blank cards, a stamp, and a piece of paper bearing the question “What is luck for you?” in Armenian. Barbara Karsh-Chaïeb went from one booth to another, approaching travelers with a smile and her seemingly simple question.

“For me, it was very important to get in contact with people, to speak with them even without knowing the language,” she said. Karsh-Chaïeb was interested to get a glimpse of what they were thinking, and how they would deal with “a strange person like her,” this smiling German artist who seemed so interested in their thoughts.

One after the other, the train passengers grabbed pens and started filling in the blank cards with their perspective on luck (or “bakhtavoroutioun”). If they were a little nonplussed by the performance at first, most were happy to participate. They perused the cards to see what others had written, before putting their own thoughts in writing.

“Most people were really open, interested in speaking with me, and taking time to think of a serious answer,” reflects Karsh-Chaïeb. The question also worked as an ice-breaker, stirring many conversations between friends and complete strangers alike. Those who traveled in groups often discussed between themselves to decide what they should write. Several elderly people, invoking weak eyesight, called on younger people in the wagon to write a sentence for them.

The artist’s enthusiasm seemed contagious; several participants even went back to her after giving her their completed card, asking if they could change their answer, or write another, more detailed one.

Passengers on the Yerevan-Gyumri train write about luck.

A work in progress…

After three days on the train, Barbara Karsh-Chaïeb had collected more than 50 index cards, written in Armenian, English, French, German, Russian and Spanish. Many of the cards linked luck to family and health; some were very practical, some more poetic.

In 2012, Barbara Karsh-Chaïeb had conducted a similar project in Stuttgart. For her, one of the most compelling aspect of re-enacting it in Armenia was to see the answers that people from different countries and backgrounds would give her.

“Train Office (a meeting point for ephemeral memories)” is still a work in progress. While the cards are being translated, Barbara Karsh-Chaïeb is now thinking about the next step: transforming the raw material, the collected cards, into an art installation.

Funnily enough, her presence in Armenia had a lot to do with luck itself; Barbara had simply read on the internet about AKOS organization, lead by Mkrtich Tonoyan, and applied to stay there as an Artist-in-Residence. After travels and exhibitions in Russia and throughout Eastern Europe (Hungary, Bulgaria, Macedonia and Poland) she felt it was time for her to go visit an unknown country…. and what better way to get acquainted with locals than asking questions?

Asian Development Bank: A Decade of Investing in Armenia