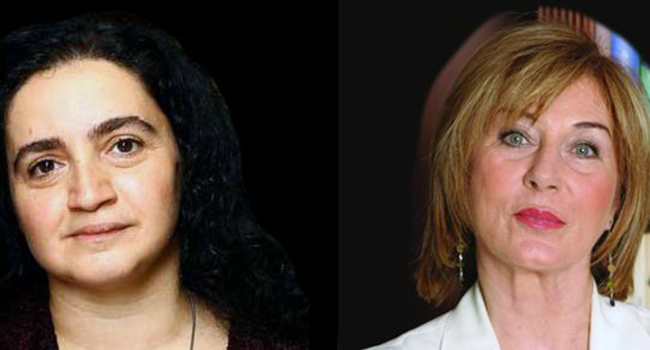 Turkish writer Ayse Kulin, who claimed that they didn’t butcher the Armenians without a reason, responded to AGOS columnist Karin Karakasli’s article criticizing her. In her response, Kulin apologizes to the Armenians, but continues to deny that what happened in 1915 is genocide. Karakasli answered Kulin again, and said that the important thing is not the apology, but the correct understanding of the events. You can read Ayse Kulin’s and Karin Karaksli’s polemic below.

Since the broadcast of the TV program “Contradicting Questions,” I replied to only three of the insulting messages that were directed at me. And after seeing that I couldn’t explain what I mean, I decided not to answer any more. I also refrained from making a statement to the media, because there is a counter campaign to the campaign which was started against me, so others too might get excited, and I am afraid that I might be turned, against my will, into the standard-bearer of some ideological movement that I do not belong to.

When I was placed in the stressful position of answering questions one after the other on live TV, without being able to express the continuation of my sentence that was being pushed back into my mouth, yes, I said something wrong. I never meant to say the words that were attributed to me, that “Armenians were butchered because they deserved it.” What I want to express was this, “The things that were done to Armenians in this country were different from what Hitler did to the Jews. Armenians and Turks, while they were going through a horrible war, they fought and killed each other. Wars are horrible. In fact, every war is a pogrom.

I feel shame and sadness for the part of the guilt that belongs to Turks. I understand and share your pain with all my heart. I am the daughter of a family who came from the Balkans and the Caucasus, who suffered the pains of deportation and war during the same years.

The lines above are my honest feelings.

Our point of departure is that while Armenians and many Turks are calling what happened genocide, my consciousness doesn’t feel this is right, and I prefer to call it a “pogrom.”

I know that I won’t lose my life because one of my sentences was misunderstood, but believe me; I lost the joy in my life.

I apologize to all of you, and the Armenians of Turkey, because of my misunderstood sentence. And I continue to think, with apologies to you again, that what happened in 1915 was a pogrom and not a genocide, because my heart whispers that Turks cannot have the intention of ending the lineage of Armenians. And I want to continue living by this belief, and the belief that this country belongs to you, me and all of us.

Since your letter was directed to the Armenians of Turkey through me, I felt the need to write a short response. Although my article was based on your statements on the TV program “Contradicting Questions” and an old article by you about your aunt’s Armenian husband, it is a criticism of a common mindset and well-established principles that you advocate. This is not a part of any campaign, but it can be seen as an expression of outrage by Armenians, that unites them no matter where they live.

Tackling a collective pain that has taken place with comparisons or presenting war conditions as justification for violence itself is something that hurts me. Armenians and Turks didn’t fight and kill each other during a horrible war. One of the oldest peoples on these lands was uprooted, with war conditions cited as the justification. These people left their possessions, properties, churches, schools, monasteries, vineyards, gardens, and shops and died on roads that lead nowhere.

There are roads that do not end, we call them the road of death, because it doesn’t have a final direction. On these roads many people [died and] returned to the earth as heaps of bones. Their souls are still in need of the truth to find peace. Moreover, the denial of this great pain became a basis of legitimacy for new systematic evils, one after the other like dominos during the history of the republic.

You are saying, “Wars are horrible, in fact, every war is a pogrom.” But sadly, pogroms are not wars. Besides your thinking that what happened in 1915 was a pogrom, not a genocide, I am more distressed from the content and meaning with which you charge the word pogrom. As I have indicated in my article, those people, regardless of classifications of pogrom or genocide, were annihilated in a state where they belonged and were citizens of, thinking that they can live together without oppression after the II Mesrutiyet. If the decision to cut off the roots of a people, which was called deportation, was limited to those troops in the eastern provinces, who were said to be in cooperation with the Russians, we could harbor on the terms of war condition and killing each other, that you also expressed. But after first arresting and eliminating nearly 250 of their lawyers, parliamentarians, doctors, clergymen, writers and musicians; which means cutting off the voice of the people, and then eradicating the existence of my forefathers from their homeland, considering the handful of people which remained as proof that there was no genocide is not an option. If feeling these things inside you, understanding what I have written, is an option, I don’t know. You said, “I know that I won’t lose my life because one of my sentences was misunderstood, but believe me, I lost my joy in life.” Hrant Dink was targeted not because of a misunderstood sentence, but because of its deliberately distorted context. The cruelty of the court and the media had been a very systematic campaign, so that today the anniversary of the murder has become a shared symbol for all the pain caused by the state since the first denial in recent history up to now. This fact alone tells a lot of things.

As a person who lost her joy in life altogether in 2007, I wish with all my heart that you find your joy in life very soon. And be relaxed that beyond your apology, what is important to me is your understanding.

I wish that one day you will really understand.

A Professor, a Photographer and a Journey