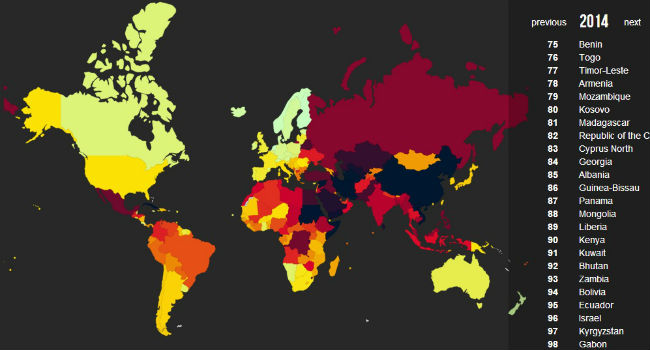 The non-profit organization Reporters without Borders has published its annual report “2014 World Press Freedom Index.” In this year’s report, from 180 countries Armenia ranked 78th. In the 2013 Index, Armenia ranked 74th from the 179 countries included in the report.

According to the report, Armenia is the leading country in the South Caucasus in terms of freedom of press, as it has been in the past several years. Among the countries in the neighborhood, Georgia ranked 84th in the Index (last year Georgia’s index was 100), Turkey ranked 154th (in 2013 Turkey was once again 154th), Azerbaijan ranked 160th (last year it was 156th) and Iran ranked 173rd (last year it was 174th).

“Although their positions in the index are fairly dispersed, Moldova, Georgia, Armenia and Kyrgyzstan all enjoy a significant degree of pluralism and relatively little state censorship. But the considerable social polarization is reflected in the media and the climate for journalists, who are often harassed by pressure groups. Given that the political orientation of individual media usually coincides with that of their owners, it would seem that respect for the editorial independence of media employees is still limited,” states the report.

The report also mentioned the 2013 elections in Georgia and Armenia: “The 2013 elections in Georgia and Armenia were calmer than previous ones. Violence against journalists was rare. Armenia’s state broadcaster has progressed as regards impartiality but the electoral environment exacerbated the ongoing information war in the privately-owned media – a war in which the authorities have a clear advantage.”

According to the report, “The former Soviet republics that most violate freedom of information – Turkmenistan, Uzbekistan, Kazakhstan and Azerbaijan – are subjected to little pressure from the international community for the simple reason that they are rich in oil and gas deposits, and pipelines. Rich enough to feel untouchable, they are also wooed because of the strategic importance. So for the time being they keep their news media under tight control and jail recalcitrant journalists with complete impunity.”

The top three countries in the 2014 World Press Freedom Index are Finland, the Netherlands and Norway. These three countries have led the index for years. Finland has ranked first for the fourth year in a row.

In the 2014 index the United States ranked 46th, compared to its 32nd place last year. Russia once again ranked 148th.

The country ranking last in this year’s index is once again Eritrea. South Korea, Turkmenistan, Syria and Somalia also ranked among the lowest.