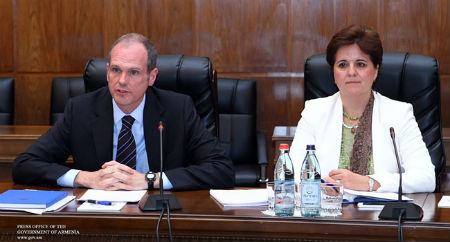 The IMF staff has reached agreement with the Armenian authorities on their request for a 38-month Extended Fund Facility (EFF) arrangement, in support of the economic and financial program of the government and Central Bank of Armenia (CBA) for 2014–17. The agreement also builds on the policy discussions that took place in Yerevan in September and December of last year (see Press Release No.13/540).

Subject to IMF management approval, the staff-level agreement will be submitted to the Executive Board for its consideration in early March. Under the arrangement, Armenia would be able to access IMF credit of up to SDR 82.21 million (approximately US$125 million), subject to six semi-annual reviews. The proposed arrangement follows the successful completion of a three-year program, supported by the IMF under the Extended Fund and Extended Credit Facility arrangements, which concluded in July 2013 (see Press Release No.13/242). SDR 266.80 million (approximately US$410 million) were disbursed under these two arrangements.

“The objectives of the IMF-supported program that concluded last July were largely achieved.

“Key challenges remain, however, in terms of sustaining stabilization, reducing vulnerabilities, and enhancing medium-term growth. Inflation and growth remain volatile, growth slowed significantly in 2013, and the external current account deficit and dollarization continue to be high, so that Armenia is vulnerable to shocks. Poverty and unemployment also remain high, and further reforms are needed to support and strengthen growth and continue Armenia’s transformation into a dynamic, emerging market economy.

“In light of these challenges, the authorities have requested a new IMF arrangement. Key objectives are to safeguard sound public finances and provide more space for growth-enhancing and poverty reducing spending, to continue monetary and financial sector policies that strengthen resilience and buffers, and to promote greater competition, competitiveness, and regional integration, and thereby, higher investment, exports, and growth.

“In particular, after two years of significant fiscal overperformance, due both to underspending on

major foreign-financed infrastructure projects and gains in tax revenues, fiscal policy is expected to provide a stimulus in 2014, as additional domestic resources will be devoted to capital outlays, and civil service wages and pensions are increased after several years of erosion. The headline deficit (excluding a one-off transfer) is expected to increase from less than 1.0 percent of GDP in 2013 (preliminary) to 2.3 percent in 2014, before coming back down to 2.0 percent in 2015 and 1.8 percent in 2016–17, a level at which public debt will begin to be reduced. Revenue increases will contribute to a reduction of outstanding tax credits in 2015, and in 2016–17, to fiscal consolidation.

CBA’s inflation target range of 4±1.5 percent, while strengthening the inflation-targeting framework through improved communications and enhanced modeling. Program targets will move gradually away from monetary aggregates to inflation outcomes. The CBA is expected to continue its current exchange rate policy, allowing the dram to float, but using opportunities to buy foreign exchange when possible while also providing foreign exchange liquidity when need to avoid abrupt changes in the exchange rate. The program will target continuing strong coverage of foreign exchange “Financial sector policies will aim at strengthening resilience, risk assessment and mitigation, and supervision, particularly in light of the high level of dollarization. The launching of the new pension system in early 2014 is expected to provide an impulse to financial sector development; program measures in other areas will support financial sector deepening.

“Further, decisive structural reforms are needed to complete Armenia’s post-crisis transformation from a construction-led growth model to a more open, integrated, and competitive emerging market. These reforms would help diversify the economy and make growth less volatile. The authorities have laid out a comprehensive approach in their new Armenia Development Strategy 2014–25 , and the new program would support implementation of this strategy by targeting structural measures that further improve the business climate, strengthen institutions, improve connectivity and competition, create a stronger environment for foreign direct investment, and tackle key risks, most notably in the energy sector. These efforts are expected to lead to higher investment and exports and contribute to a further adjustment of the external current account deficit—to 6½ percent of GDP in 2017—thereby reducing vulnerability.

“Risks to program exist, but they are manageable. Downside risks include adverse geopolitical events and external shocks, including a weakening of inflows in the context of a protracted slowdown in Russia. The authorities’ sound policy framework, efforts to further build buffers, and commitment to a strong structural reform agenda are important ways to mitigate risks.”

Remittances are on the Rise