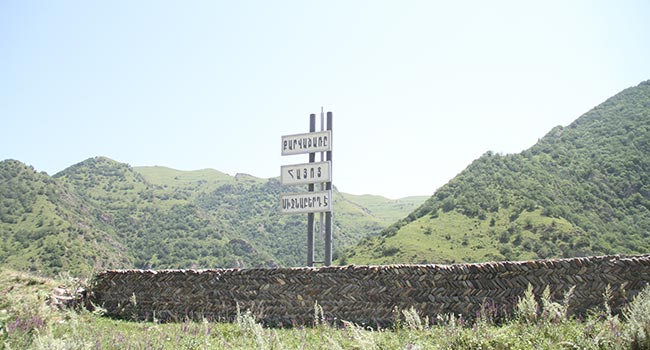 The authorities in Artsakh and Armenia had doubts over the Azerbaijani team of infiltrators but were convinced only after the July 4 disappearance of a 17-year-old resident of the Karvachar village of Jumen, Smbat Tsakanyan. Such a foundation for the assumption provides me with an official timeline of messages and content for the investigation undertaken and numerous conversations with civilians and other responsible officials.

Smbat’s father, Mekhak Tsakanyan, left his son at their home in Jumen (where they keep their livestock) in the evening and returned in the morning to find his son gone. The father also noticed that food had been taken from the house. He reported his son’s disappearance to the police. Until July 10, for a total of five days, anxious rumors were spread in Armenian media and around Karvachar and Vardenis that the disappearance of the 17-year-old boy is connected with the Azerbaijani infiltration.

On July 10, the press service of the NKR Defense Army issued its first message. “An adversary attempt at a diversion intelligence operation was made at the NKR and Armenian state borderline (in the Karvachar direction). The operation was thwarted by the defense army’s front line troops. Part of the group has been arrested, the others fled the scene. The Armenian side did not incur any losses during the operation.”

On July 11, the NKR Defense Army published a series of photos of the Azerbaijani diversion sabotage team and evidence of their actions “due to the official Azerbaijani media denial of information about the Azerbaijani attempt at a diversion intelligence operation and the captives.” Artsakh also published the photo of captive Shahbaz Guliyev, who is registered as a resident of the village of Ghapanlu in the Mirbashir region.

On the same day, in the region of Karvachar, 42-year-old Major Sargis Abrahamyan was killed and an Armenian woman was injured. The official reports make it impossible to understand the circumstances of the tragedy and Major Abrahamyan’s connection to the incidents. On July 12, Armenia’s Minister of Defense Seyran Ohanyan announced that Armenian soldiers executed one other saboteur during the adversary infiltration, but that an Armenian officer was killed and one woman was injured in the crossfire.

In reality, it was bad luck that the deceased Major Abrahamyan and the severely injured woman who accompanied him appeared in the spotlight of the events. After the Armenian and Artsakh authorities became convinced that the disappearance of 17-year-old Smbat Tsakanyan was linked to the Azerbaijani diversion, the entire area ended up under the microscope of the army, police, security authorities, and the residents. (However, the area of Karvachar is wooded and geographically rugged, making it extremely difficult to monitor.) The Azerbaijani group noticed that they were being pursued and had to try to break out of the encirclement and return to Azerbaijani territory across the section of the border (near the mines) where the regions of Karvachar, Vardenis, and Dashkesan meet.

At 5:00 p.m. on July 11, the Azerbaijani group approached the section of the border where Armenia, Artsakh, and Azerbaijan share an intersection point, at the region of Sotk. Members of the group exit the wooded valley towards a road (this is the road that is being reconstructed by the Hayastan All-Armenian Fund) and stopped a vehicle headed for Nor Karachinar. (Nor Karachinar is the first village in the region of Karvachar after the last village of Sotk in the Vardenis region.) They stop the vehicle, shoot and kill Major Abrahamyan and severely injure the woman accompanying him, who was travelling to join her husband. The Azerbaijanis try to get into the vehicle to drive in the direction of Sotk. At that moment, the Armenian side surrounds them and kills one of the Azerbaijanis whose name is probably Hasan. This is probably the same Hasan who, in the famous Youtube video where three Azerbaijanis are eating barbequed veal near a river in Karvachar, says “Some [Azerbaijani] soldiers are afraid to come to this area, they say, we will go and starve there. There is vodka in the Jermuk bottle, we took it from an livestock farm.”

Some of the persons I conversed with in Karvachar said that Hasan once lived in Vardenis, and the other Azerbaijani who was arrested, Dilham Askerov, was a former resident of a village in Karvachar. His son, Keroghlu Askerov, told Azerbaijani reporters, “My father frequently travelled to Russia. We thought he was there. We read online that he went to the Kelbajar region.”

Dilham Askerov is from the area where the village of Jumen is situated and where 17-year-old Smbat Tsakanyan disappeared from. The boy’s body was found only after Askerov’s arrest. This suggests that he is the one who led the Armenian forces to the exact location of the body.

If the ill-fated Smbat had not fallen into the hands of the Azerbaijani diversion group, then it cannot be ruled out that the Azerbaijanis would have retreated along the same path through which they were able to infiltrate, and no one would have known about it.

And perhaps we would have learned about it by watching the online video. Considering that the diversion group was armed, one other variant should not be ruled out: that they would have been able to commit more murders in the Karvachar region, film them and post online, thereby exerting psychological pressure on the Artsakh authorities and the Armenian residents.

Smbat, who was killed by the Azerbaijanis, was buried in the village of Charektar, next to his grandfather. His father and relatives urge Artsakh authorities to not return the arrested Azerbaijani murderers to Azerbaijan under any circumstances.

During these past few days, a series of videos appeared online that clearly depict how the Azerbaijanis infiltrate Artsakh territory, walk around, return, and post the videos to the internet, making it known to the Armenian side. There is no doubt that the Armenian side does the same. There is substantial evidence for this. Since the ceasefire of 1994, there have been numerous incidents where, for example, the Azerbaijanis enter a few kilometers into Armenia’s Tavush region, capture an Armenian and return to Azerbaijan. Those people were able to return home only by paying a ransom.

The geography, borders between districts, and other circumstances do not permit 100 percent surveillance of the Armenian-Azerbaijani border, the total length of which is more than 1,000 kilometers. It is practically impossible to prevent absolutely infiltration by the enemy, but it is the duty of the Armenian army and other services to minimize such incidents.

The Azerbaijani government, in particular President Ilham Aliyev, threatens Armenia with a new war, both publicly and through the OSCE Minsk Group mediators. The Azerbaijanis will try to capture or seize Armenians in order to conduct [prisoner] exchanges. It is clear that the Azerbaijani side will not rest, and will harass the civilians in the border villages of Tavush region with their newly acquired weapons. The possibility of Azerbaijan committing terrorist acts against Armenian diplomats and Armenians who live outside of Armenia should not be dismissed.

Read this in Armenian.

Armenians in Tbilisi ‘Will Take Legal Action Against Attackers’