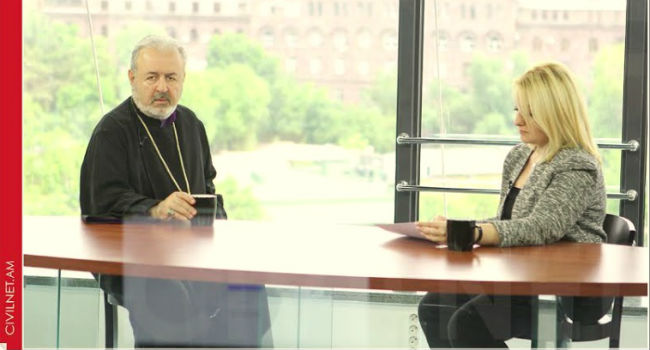 Archbishop Aram Atesyan, General Vicar (Acting Patriarch) of the Armenian Patriarch of Constantinople in an interview with CivilNet’s Aline Ozinian, spoke about Turkish Prime Minister Recep Tayyip Erdogan’s April 23rd message, his meetings shortly thereafter with the Prime Minister and the Minister for Foreign Affairs, underscoring that the religious leader officially represents the Armenian community. Archbishop Atesyan also spoke about the issues of Islamized Armenians and their relations with the Patriarchate.

-Your Eminence, recently, the foreign, as well as the Turkish and Armenian media has widely discussed Turkish Prime Minister Recep Tayyip Erdogan’s April 23rd message, which was followed by your meetings with both Erdogan and the Minister for Foreign Affairs of Turkey. You were accompanied by representatives of the Armenian community in these meetings. Were these representatives selected by you or by the state?

-No. Every time when I’m invited to the capital Ankara by the prime minister or ministers, I select people who accompany me, and they are not necessarily the same people every time. They are prominent figures in the Armenian community, philanthropists and community figures who attend the meeting as representatives of the Armenian community. Since the times of the Ottoman Empire, the state has recognized the religious leader, giving him the title Cemaat Basi, and official relations were conducted with him. And the religious leader selects people who are aware of the matter at hand. However, the decision is ours.

-Your Eminence, following your meetings the Turkish media wrote that the people accompanying you were the secular leaders of the community. Why does the Turkish state want to perceive it this way? Are there any plans that the community in Istanbul should have another structure besides the Istanbul Patriarchate, or this is just a mistake of the Turkish press?

-No, that is the mistake of Turkish press. There is no such initiative underway. Each community figure leads one foundation, for example, the Chair of the Board of Trustees of Yedikule Surp Pırgiç Armenian Hospital is Bedros Sirinoglu. But the community leader is always the religious leader, who sends the chair as a representative. He represents the community and the Patriarchate. The Patriarchate selects them. No institution or individual can spontaneously represent the community, because the Patriarchate is the center, and the religious leader is the community leader. In this case, attention is focused on Bedros Sirinoglu; today he is the Chair of the Board of Trustees, but if tomorrow the chair changes, that person will be the principal representative of the community.

-When you welcomed Erdogan’s message, you did that on behalf of the Patriarchate, isn’t that so?

-Your Eminence, the community has a variety of issues related to estates and churches, but recently we witnessed manipulations during local council elections. Do you think it’s time to change the election procedure, has such a necessity matured?

– In fact, it is our fault because the majority of the representatives of our foundations mobilized around the idea of a general election, regional elections. Istanbul was divided to three regions so that all Armenians had the right to elect and be elected. But the others appealed to the ministry requesting the elections be held in districts, and the district population choose the local council. However, there are districts which have a population of 10, others have 100, while some others like Ferikoy, have a population of 30,000, and Bakirkoy has a population of 15,000. We wanted to unite these 10 or 100 within the regions, however, as the ministry found itself between two different requests, it postponed the issue. According to the minister, they could have made a decision in half an hour and imposed it, but they wanted us to agree upon one system for elections.

-In other words, the Armenian community should find a solution and not the state.

-The minister openly said. “Look at the amount of requests on my table. If I have a different approach to each one, I will not be able to grant you permission to hold elections.”

-And why is the community so polarized and why can’t it unite around one idea?

-This is not new, it has always been like that, there have always been groups. We have never been able to be united.

-Will this issue find a solution in the near future?

-Your Eminence, I would like to speak about the hidden or crypto-Armenians, the Islamized Armenians. Do many people apply to the Patriarchate to convert their religion? In an interview 1-2 years ago, you said that there was a large number of Islamized Armenians in Turkey; this comment caused some controversy. Please tell us about your statement and the subsequent developments.

-There are people who have an Armenian grandmother or grandfather, however, following 1915 how can they feel Armenian? If they are Armenians, then I would demand that they apply to the Patriarchate and pass a one or six month course, whatever I decide, about Christianity, the Armenian Church. At the end of the course, they need to change their religion in their passport to Christian. In that case, they need to become a member of the Armenian Church. As to simply saying “My grandfather, grandmother are Armenian,” I do not accept such things.

-Are there many applicants?

-No. Now they say there are 1.5 million Armenians, referring to the generations of survivors and those killed in 1915. But what’s the benefit for me or the church that they only say, “My mother, grandmother, grandfather was Armenian?”

– In other words, they say it, however they don’t do anything about it.

-No, they do not apply to the Patriarchate. There was an issue in Tigranakert. There were 1000 Armenians, but why didn’t anyone apply to me? Only one person did so, besides the 7-8 people that I converted into Armenian 15 years ago and wed them to Armenians. I have brought female students from Adiyaman to study in the Kalfayan school. These, of course, are different examples. I don’t accept the words “My roots are Armenian, and so am I,” because my numbers don’t grow from that. I say, OK, come to the Patriarchate and get baptised, they agree, but want to have Islam written in their passport. Why are you going to practice two religions?

-That is, they don’t want to officially convert.

-No, they don’t, they want to take advantage of both religions, but it’s impossible. Or they want the religion section in their passport to be left empty.

-Ok, but if a person identifies himself as Armenian, has Armenian parents and wants to convert, but has no documents, what should he do?

-If I make sure, and they accept my conditions and agree to take courses and have Christian stated as their religion in their passport…by the way, some tell me that they are from the regions, how will they participate in lessons…I tell them that I will send all the materials for them to study, then I ask them several questions to make sure they have read those materials, and when I’m sure they have, I baptise them. It is unacceptable for me when they say, let the religion section in my passport be left empty or let it be Muslim.

-Has the state given you the right to convert people to Christianity without documents, being convinced of their conviction?

-This government issued rights to all religious leaders, so that when people apply to us to convert to Christianity, we are be able to sign an official document with the photo of the person and send it to official bodies. The passport of the person is immediately changed, and Christian is stated in it without any issues. Previously, this process went through the court, requests were denied and people could not change their religion. But today, even without my assistance, people can change their religion very quickly, it takes five minutes.

-Is it a simple process?

-Your Eminence, since you are currently in Yerevan, I have one question which is of great interest – how many members does the Armenian community of Istanbul have?

-70 000 is not the number of registered, but since the majority of our local councils has no precise election system, and therefore no clear figures of the local population, and since there are Armenians who were not registered, taking these things into consideration we say 70 thousand.

During the election of Patriarch Mesrob, 15,800 people voted and we know that even 1/5th does not take part in the various church or local elections. Therefore, I multiplied 15 thousand to five thousand and got the number 70,000. There are many of us. There are also many Armenians in the regions, who despite being Muslim in their passport, wear a cross, speak Armenian, pray before a meal. I call them converted Armenians, hidden Armenians, instead of those who simply say “My grandmother, my grandfather was Armenian, so am I.” They are not hidden Armenians.Since there was heavy oppression at the end of the 1950s on Armenians living in the East of Turkey, they officially had to convert. There are people among them who have stated “Christian” as the religion in their passport, but they hide their religion and nationality from the neighbours. I get the number 75,000 without taking into account these people.

Return to the Past is Impossible