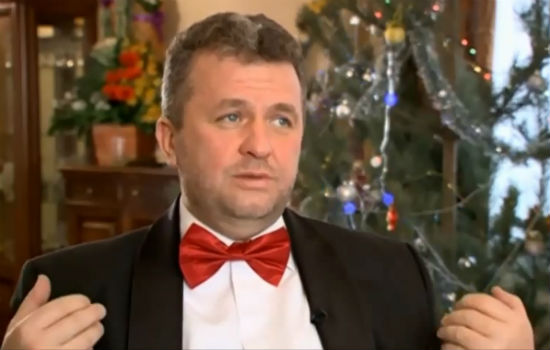 On November 19, Sorin Vasile, Romania’s Ambassador to Armenia, gave a lecture at the American University of Armenia. He was invited to talk about the relationship between the two countries and answer questions from the public. When an Armenian student stood up and asked him what was more important for Romania — political and economic ties with Turkey or the moral imperative of recognizing the Armenian Genocide, the Ambassador had a stunning answer:

“…[T]alking about the events that happened in the beginning of the last century, it’s very complicated…which is the morality? To recognize ok…This is a morality. Which is the morality between the normal couple…The hermaphrodite couple…yes? No, not hermaphrodite. Homosexuals and the normal…men and women, yeah? They are ok..? They are normal, they are moral. And the homosexuals are moral or? So, which is the same with…you know everything is relative you know. This is the answer to your question. For you, it’s controversial. For the gay couple, for them it’s perfect, this is the model of the family, yeah? Gay.”

The audience remained silent. A very awkward and uncomfortable silence. What is the link between the morality of the recognition of the genocide and the morality of homosexual couples? To this, the Ambassador, questioned by email one week later with the exact transcript of his quote, replied that “It was analyzed the concept of morality and there were no comparisons made.” It is up to the readers to judge.

What he said next leaves no room for ambiguity:

“Now everything is relative, it’s quite complicated. This is not the mathematic; you know the policy, the strategy, the geopolitics. You don’t have 1 + 1. You know there’s actually a good joke with the Jew[s]…the Jew, the big businessman, is looking for an accountant in his company and the first guy who is the candidate, yes, saying listen..how is 10 + 10, he’s saying 20! No you’re not good, out. The second one, 10 + 10 and he says 30. No you are not good, go out. And the third one comes: how is 10 + 10 and he’s saying, the candidate is saying, ‘how much you want it to be?’ Ok you’ll work, you’re hired, you’ll work for me. This is not… mathematics to say 1+1 is 2. …Next year will be the 100 years of commemoration….I’m not saying who is right, who is not right because I don’t have the right to say you know, but..it’s quite complicated.”

That an ambassador could make a joke about a religious group, namely the Jews, in response to a question about the Armenian Genocide is simply shocking and insulting.

Perhaps Mr.Vasile is not aware that these jokes are the ones that spread and reinforced clichés about particular groups. In this case, the Jew is associated with the “big businessman” and with greed. The same clichés were used in the press of the 1930s in Europe and even today in anti-Semitic publications. It is precisely these stereotypes, especially those that Armenians suffered through in 1915, which spread ignorance, resentment, and hate. Stigmatization and generalization always ultimately end up as acts of discrimination and exclusion.

Of course, this joke should not allow anyone to conclude anything about Mr Vasile’s view on the Jews, but the fact that he expressed it as an ambassador and in a public conference illustrates a lack of respect towards the history of Jews and Armenians.

At the end of his comment, M. Sorin Vasile added:

“And the most important thing…look at French and the Germans..the reconciliation between them. It takes some time, yeah? But finally they found a common way.”

By making another comparison, this time with Franco-German relations, the Ambassador actually brought, maybe unconsciously, Turkish propaganda to life by saying that over time the Genocide issue will cease to be a problem. The passage of time works in favor of this strategy of forgetting with the gradual disappearance of the Armenians who transmit the memories of their relatives, parents, cousins, who were subjected to Genocide. It’s a political strategy well assumed by the Turkish authorities.

But the Romanian Ambassador seems to forget one thing. The reason why France and Germany are now allies and have good relations lies primarily in the recognition by both countries of the errors and atrocities they committed in the past. Reconciliation, forgiveness, and finally cooperation between the two countries were possible thanks to lucidity on a common past.

Time alone will erase absolutely nothing. On the contrary, it can provide forgotten and denied tragedies the acrid and bitter taste of injustice and cynicism.

Mr.Vasile ended his answer in this way: “In my position, it’s quite complicated. It’s not easy, it’s a morality, economic, and it’s a political, geostrategic. There are a lot of factors that are combined, quite complicated.”

No, the question of recognizing the Armenian Genocide is not complicated. It has nothing to do with any kind morality. Or with an alleged questioning about the truth of historical facts. These facts are tragic and are recognized by all serious historians. What obscures the issue are the economic, political and geopolitical pressures that Turkey imposes on countries that would dare to recognize the Armenian Genocide, like Romania. Because despite the fact that the country hosted Armenian refugees after the Genocide and was the first to recognize the independence of Armenia in 1991, the authorities still refuse to recognize the reality of the Genocide.

Precisely because of those economic, political and geostrategic issues that the Ambassador mentioned. Romania is indeed a privileged commercial partner of Turkey, it is home to an important Turkish minority and has strong diplomatic ties with Ankara. Indeed, the Armenian student who asked the question was right. Romania prefers to focus on its present economic interests rather than accept historical injustices.

In face of the duty of memory and the necessary lucidity over history, the Ambassador chose instead to make remarks full of political cynicism and disrespect toward a people’s past, toward religious and sexual minorities and finally toward the identity of each one of us.

Questioned a week later on all of these remarks, the Ambassador wrote: “I do not have any comments to make concerning your affirmations. I have clearly said that the events in 1915 were painful and I have expressed the hope that, as Germany and France found the path of reconciliation, in a nearer or further perspective, the countries of the region will identify negotiation channels.”

He refused to apologize.

Note to the reader: The words of the Ambassador quoted in this article are accurate extracts from the lecture he gave at the American University of Armenia on Wednesday, November 19, 2014. The transcript was made from an audio recording made during the conference.

A Second Chance at Life: The Story of POW Hakob Injighulyan