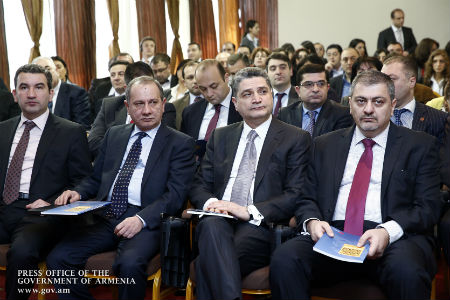 On March 4, EV Consulting and the Economy and Values Research Center presented the “National Competitiveness Report 2013-2014, Growth Imperatives and Constraints.” According to the report, unemployment, poverty and emigration are the most critical social challenges for Armenia. During the presentation, director of the Economy and Values Research Center, Manuk Hergnyan, who also co-authored the report, stated that the creation of a transparent and fair business field in Armenia is crucial for all companies and businessmen. Hergnyan said that the absence of fair competition and the shadow economy have adverse effects that are multi-layered for companies and on the country. He stated: “The shadow economy is the main problem in creating a framework for fair competition and all other problems originate from this.”

The report points out four fundamental constraints to stable economic growth: 1. Distortions in the competitive landscape, thereby the creation of a level playing field and transparency is imperative; 2. Lack of self discovery, meaning that there is an absence of a cohesive industrial policy that would engage key stakeholders and ensure Foreign Direct Investments; 3. Insufficient quality of human capital that will require massive investment in education and; 4. A one dimensional financial system. According to the report, the shadow economy creates negative externalities on companies and the country. “Decreasing the shadow segment of the economy is a priority on the government’s agenda. However, it is like waging a battle in the dark; there are no reliable estimates of the extent and depth of the shadow economy. The most recent estimate was made in 2008 and is not relevant today,” says the report.

The Prime Minister noted that within the Armenian economy, effective redistribution of financial means has become a problem. In this regard the development of small and medium businesses is imperative not only economically, but politically as well. According to Sargsyan the majority of Armenia’s financial means in the country are in the hands of a small number of businessmen.

Legal Ramifications of the ECHR Decision