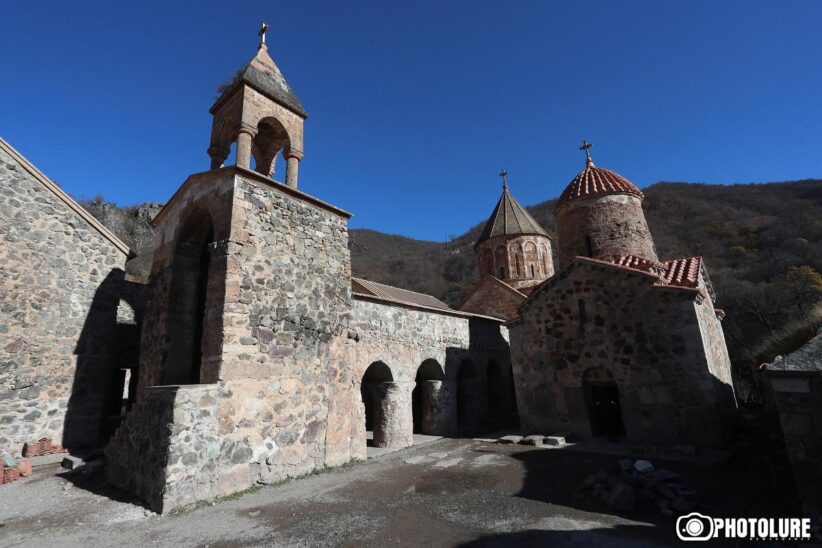 In the immediate aftermath of the Second Artsakh War, which began September 27, 2020 and lasted 44 days, worldwide Armenians are raising concerns over the destruction, desecration, or alteration of Armenian cultural heritage sites that are now under control of Azerbaijan.

The image is seared into the psyche of every Armenian in the world: a lone cellist (Belgian-Armenian Sevak Avanesyan) playing “Kroonk” (the crane) in the freshly bombed Sourp Ghazachetsots Cathedral in Shushi. The same gesture was repeated by world-renowned cellist Yo-Yo Ma, to honor his friends and the greater Armenian diaspora. Then a pianist played a solo concerto before the same bombed-out Christian cathedral. Soon thereafter, the Azerbaijani public-relations machine caught on and began a mirror-image campaign of projection wherein a lone violinist performed before a war-ravaged and neglected “Cultural Center” building in Fizuli, as Azerbaijan has made like claims of Armenians neglecting mosques and other sites.

The war of words and cultures is well and truly joined however as both Armenia and Azerbaijan (and their respective communities abroad) accuse one another of cultural genocide. The heart of the matter is who shall retain control over various historically and culturally significant sites in the aftermath of the Second Artsakh War. As for the Azerbaijani narrative, they have pointed to old, abandoned mosques in the Alkhanli village near Fizuli and in Aghdam being left neglected and allowed to become more or less a barn for farm animals (a video shows cows and pigs, the latter of which is highly offensive to the Muslim faith as an “unclean” animal). Azerbaijanis also point to the abandoned city of Aghdam, which Armenians neither renovated nor resettled, as proof of neglect. Once again, there is a bright line between abuse and neglect. For example, when Turkey left the ruins of Ani (the medieval Armenian “city of 1001 churches”) to the fate of time, that was clear neglect and indifference. When Turkey turns the majestic Hagia Sofia Church into a functioning mosque, that is abuse and cultural appropriation and erasure.

In December of 2005, the prelate of northern Iran’s Armenian church, Bishop Nshan Topouzian, filmed – from across the Araxes River in Iran – the Azerbaijani military taking sledgehammers to thousands of ornate Armenian “khatchkar” stone-crosses at the Julfa Cemetery. The Azerbaijani soldiers can be seen loading the remnants onto truck beds and dumping them in the Araxes. This chilling footage can be found in a 2006 film entitled “The New Tears of Araxes”. The film is available for viewing on YouTube. Satellite images show the scale and finality of the cultural erasure.

The Azerbaijani government, a hereditary dictatorship run by Ilham Aliyev, the son of the former dictator Heidar Aliyev, has steadfastly refused entry for UNESCO and other international inspectors to view the Julfa cemetery site, which is now a military firing range. Azerbaijan has denied that Armenians ever lived in Nakhichevan, despite the existence of these Armenian cultural artifacts and the fact that the word “Nakhichevan” is a wholly Armenian word (nakh= first; ichevan=place of rest) or as according to the nineteenth-century language scholar, Heinrich Hubschmann, the name “Nakhichavan” [sic] in Armenian literally means “the place of descent,” a reference to the descent of Noah’s Ark on the adjacent Mount Ararat. The Azerbaijani narrative is that Christian Albanians built the churches, despite not only their distinct Armenian architecture, but Armenian language inscriptions.

Of course, this is not just a “he said – she said” narrative of accusation and denial. Azerbaijani dissident intellectuals have fearlessly criticized their own authoritarian regime for acts of “cultural vandalism”. The Azerbaijani writer Akram Aylisli was a highly popular writer in Azerbaijan, that is until the publication of the 2012 novella ‘Daş Yuxular’, translated to “Stone Dreams”. In it, Aylisli wrote of the conflict between Armenia and Azerbaijan in the 20th century, and of the massacres of Armenians by Azerbaijanis in 1988 (Sumgait, Baku and Kirovabad/Ganja) and tied them to historical parallels of pogroms and massacres of Armenians in his native village of Aylis, Nakhichevan by Turkish soldiers in 1919. Azerbaijanis took great offense to the sympathetic depiction of Armenians by the writer. Since then, Aylisli became persona non grata in Azerbaijan. President Aliyev signed a presidential decree that stripped Aylisli of the title of “People’s Writer”; and the pension that came with it. Aylisli’s books were burned by Azerbaijanis his own hometown and other towns, his son and wife were fired from their jobs, and a bounty of some $13,000 was promised for cutting the writer’s ear off. The Ministry of Education withdrew his works from the school curriculum. Aylisli’s plays were banned from theaters. Azerbaijani writers, artists and academics repudiated him. The Union of Azerbaijani Writers convened a meeting and expelled Aylisli from its membership. In March 2014, a formal request was made by various public figures throughout the world to nominate Aylisli for the Nobel Peace Prize. Aylisli is presently under “house arrest” in Baku.

Saint John the Baptist Church, commonly known as Kanach Zham, is an Armenian Apostolic church located in Shushi. It is just uphill from the Ghazanchetsots Cathedral. Kanach Zham means “Green Chapel” in Armenian, this is because at one time the church’s domes were painted green. The church dome and bell tower were destroyed soon after Azerbaijani forces captured the town.

The most well-known of the Armenian cultural heritage sites, Dadivank, dates back to a 1st century chapel founded by the earliest preachers of Christianity. It was built into a monastic complex between the 9th and 13th centuries. It is located in the Karvachar/Kelbajar region which was ceded to Azerbaijan in the Russian-brokered ceasefire agreement. After a massive social media campaign by Armenians worldwide and Dadivanl’s Father Hovhannes Hovhannisyan, who vowed to remain, Russian peacekeepers were placed at Dadivank to protect it from the same desecration and vandalism seen in other parts of Azerbaijan and Nakhichevan.

“Angels and the Cross” Khatchkar

Per Simon Maghakyan, who has followed and documented this issue for years, one of the most prominent khachkars at grave risk is the 14th century “Angels and the Cross” in the Vank village of Hadrut region, which Azerbaijan captured last month. At this point in time, the status of “Angels and the Cross” khatchkar is unclear.

Founded in the 4th century, shortly after King Tiridates proclaimed Christianity the Armenian state religion, Amaras is located in the Martuni region. At the beginning of the fifth century Mesrop Mashtots, the inventor of the Armenian alphabet, established in Amaras the first-ever school that used his script. According to medieval chroniclers Faustus Byuzand and Movses Kaghankatvatsi, St. Gregory the Illuminator founded the Amaras Monastery at the start of the fourth century. Amaras was the burial place of St. Gregory the Illuminator’s grandson, St. Grigoris (died in 338). A tomb built for his remains still survives under the apse of the nineteenth-century Church of St. Grigoris. Recently, Russia stated they would also place peacekeepers at Amaras to deter vandalism or cultural appropriation.

A 13th-century Armenian Apostolic Church monastery located in the Togh village in the Hadrut region recently ceded to Azerbaijan, Gtichavank was rebuilt in the 13th century. It was a key Cathedral for the autonomous principality of Khachen. The status of Gtichavank is unknown at present as Hadrut is in the hands of Azerbaijan forces and the Armenians have fled.

Tigranakert is a Hellenistic Armenian city founded by the Greek-speaking Armenian emperor Tigranes II, one of many cities taking on his name. There are also newly-excavated early medieval Christian temples there. It is located in the Aghdam region and has been recently shelled by Azerbaijan. This very important archaeological site is in present danger of being permanently altered.

It is one of the first basilica churches in the world. Some of its unique architectural features suggest that it may have been founded as a pagan temple before the year 301. It is located in the Lachin region that connects Armenia with Artsakh/Karabakh. As for December 1, 2020, the Lachin Corridor connecting Armenia proper with Armenian Artsakh will be ceded over to Azerbaijan with Russian peacekeepers manning the narrow pass.

UNESCO has made a statement about preserving both cultures and the need to have unfettered access. Much of this is tedious work as the Armenian cultural artifacts have distinctly Armenian features and often Armenian language inscriptions that must be painstakingly altered to obscure their origins. This is not only a fool’s errand, but in a ham-fisted way it provides the world further proof that Armenians are the indigenous people of the South Caucasus. The parallels to the Taliban’s 2001 destruction of the 6th Century Buddhas of Bamiyan are inescapable. The more Azerbaijan feverishly scrambles to erase remnants of the ancient Armenian civilization, the more they prove that Armenian civilization is indeed both ancient and indigenous to the region.