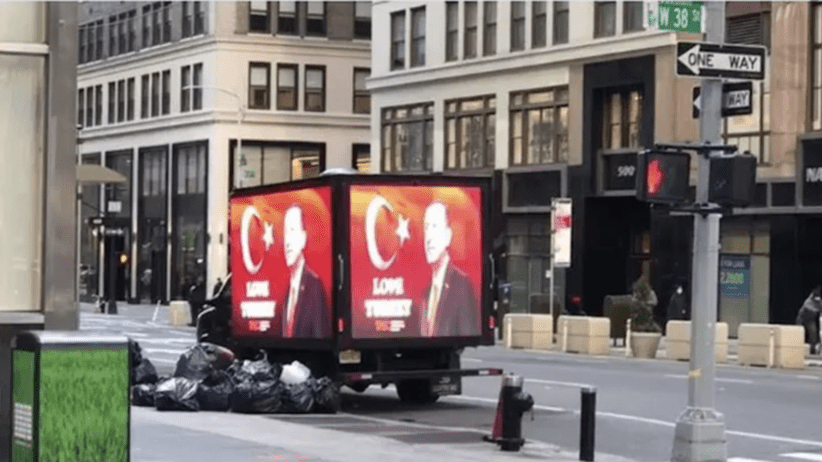 A billboard in New York’s Times Square placed by https://silencedturkey.org/ declaring “STOP ERDOGAN” has gotten the Turkish leader’s attention. In reply, a PR blitz has kicked off not just throughout Turkey but also the world with the demand to “Love Erdogan” instead:

billboards paid with the taxes of people, including those who do NOT "love" erdogan pic.twitter.com/Aoj8qFkrkY

This New Yorker however was not impressed:

I guarantee that 99.9 percent of New Yorkers don't care…

During his successful visit to Iraq this past week to draw attention to the threatened Christian populations of the region, Pope Francis made a visit to destroyed Christian churches in Mosul including an Armenian one which had been torched by Islamic State insurgents after they captured the city in 2014. The Armenian families of the city fled and it is said there are no Armenians left in Mosul ever since.

Before leaving #Mosul, Pope Francis made a private visit to the destroyed Syriac Orthodox and the Armenian churches.
Pics from @HolySeePress #PopeInIraq pic.twitter.com/ijcOFJAxVj

International Women’s Day (March 8) was marked in Baku this year with a march by female human rights activists protesting gender-based violence and femicide; however police broke it up before it even began. At least 25 people were detained, many described being harassed by police, and some were injured:

Police in #Baku mark #InternationalWomensDay by making sure, women's voices are silenced in a society already marred by violence and harassment against women. So in case, anyone wondered why women do not seek police assistance when faced with violence – here is a clear answer! https://t.co/YmC6KeNA4V

Don’t look now but there’s a new partisan think tank in town! This past week the “International Conflict Resolution Center” came to Armenian Twitter’s attention due to their staffers tweeting about meetings with Azerbaijani officials such as Hikmet Hajiyev.

This one is extra special. Azerbaijan is really spending for Westerners these days pic.twitter.com/7YIqsUGVOB

The organization was founded during the autumn war in Artsakh, and its employees include its international fellow Christopher Chambers, a journalism professor and author of retro pulp fiction novels, and Austin Clayton, a former Baku-based journalist for Eurasianet. Clayton drew particular ire for his use of Azerbaijani propaganda-approved hashtags such as #KarabakhCulturalGenocide, which was used to describe an exhibition of Armenian rugs from a private collection established before the first Karabakh war even began. Chambers and Clayton are now returning to DC from Baku and have expressed their keen interest for an invitation to Yerevan as well. Clayton put out a call for any Armenians able to connect him to think tanks and government officials in Yerevan to contact him, while Chambers echoed that by expressing his desire to be “hooked up with Armenians who aren’t whackos or trolls of beholden to the Russians”.

Yes we did all that. Hook us up with Armenians who aren’t wackos or trolls or beholden to the Russians and we can feed in their info, images etc. Ready? Do it soon bc we are making plans for Ukraine, Georgia…and arranging briefs to State, White House folk.

They deny being specifically paid by the Azerbaijani government, but as of yet the think tank’s funding has not been disclosed. Watch this space.

Finally, the Twitter replies are full of collective shock and sadness as Armenia announces it will not take part in Eurovision this year…

We’re sad to announce that Armenia will no longer take part in this year’s Eurovision Song Contest.https://t.co/VtGZ00Oplm