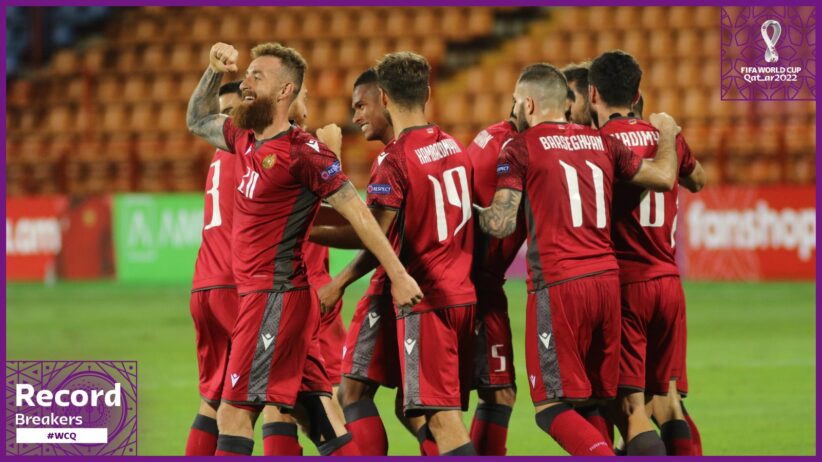 Even if you aren’t a sports fan, you’ve probably heard about the Armenian National Football (soccer) team’s incredible run in the World Cup qualifiers. For those who aren’t familiar with how it works, Armenia is currently in the “group stage” in which all European teams have been divided up into ten brackets of 5 to 6 teams each and will play ten qualifying games amongst themselves. Armenia’s first game last week was a win against tiny Liechtenstein, but things really heated up a few days later when Armenia also shut out Iceland.

Another qualifying match would take place three days later against Romania, a much higher ranked team. Armenia indeed was trailing by a point, but in the last couple of minutes scored two goals to snatch a victory at the last second.

Armenia, as can be expected, went crazy with much needed celebration after an incredibly difficult year. In fact, most tweets were about how surprised and pleased people were at the ability to celebrate.

Armenian fans expected they’d be shortly joined at the top of the group ranking by powerhouse team Germany, who was to play little North Macedonia just after Armenia’s victory… but in yet another shock twist Germany lost! Armenia is now king of their group until at least September, when they will take on the remaining teams in their group, North Macedonia, Germany, and Liechtenstein. Anything is possible – believe!

Azerbaijani fans aren’t taking Armenia’s wins too well, and it doesn’t help that they are in last place in their own group. Multiple tweets from Azerbaijanis complained of opaque conspiracies in which the Icelandic team purposefully threw the game (for reasons unclear) and that the referees in the Romanian game purposefully threw the game in Armenia’s favor (again, no evidence or reason given; they just did, ok?). Some Turks did stop by r/Armenia to congratulate Armenians on their victories.

Also at issue is Azerbaijan’s privilege as a host of the 2020 UEFA European Football Championship (Euro 2020), which was already a cloud hanging over the organization due to Azerbaijan’s extreme oppression of human rights. Now, Azerbaijan’s decision to make war on Artsakh has further disqualified it from the right to host in the eyes of many. Then again, the 2022 World Cup will be held in Qatar, where the plight of the large numbers of migrant workers who have been hired to build the stadiums have been likened to “basically slaves”, many of whom have been killed on the job. The 2015 FIFA corruption scandal sheds light on how repressive regimes like Azerbaijan have managed to end up as hosts.

In other sports news, Armenia’s delegation to the ISU 2021 World Figure Skating Championships in Stockholm was decimated due to COVID. First, men’s skater Slavik Hayrapetyan was forced to withdraw from the competition just before leaving for Sweden when he received a positive test for COVID. Then, once in Sweden, the Armenian ice dance team of Tina Garabedian and Simon Proulx-Senecal, who were looking to qualify for the Olympics at this event, and after a number of negative tests, received devastating news just hours before skate time that apparently Simon had tested positive for COVID as well. As they had been in quarantine, it was unclear how he contracted the disease. Simon immediately retested, but did not receive his results until after the competition had finished, and was told he was still positive. Yet according to the team, when they finally received the written report, they found that his test had in fact been negative. They were announced as having withdrawn from competition, though the team says they did no such thing. They know they were prevented from competing due to an error. The Armenian Skating Federation has requested the ISU to find a fair and just resolution to this situation, which has denied the Armenian team their Olympic dream, and the issue remains outstanding. While the Armenian Football Federation is in the spotlight, spare a thought and some support for the Armenian skaters as well. While it rarely gets attention, there is a lot of Armenian greatness in skating, even beyond the Armenian team itself.

Speaking of Armenian greatness, two Armenian filmmakers are each making a splash at the 93rd annual Academy Awards (Oscars) later this month!

From the “unexpected but very cool” file, did you know an Armenian born in what is now Bangladesh published a little-known Armenian periodical during the British Raj era in India about Armenian news from home and abroad? Check out a few pages of it here and keep following the page of the Bangladesh Armenian Church for more interesting features from a distant corner of the Armenian world.

Vice recently published this explosive article about how the Aliyev regime has bribed its way through Germany, with investigations now underway into a number of current and former members of the German parliament.

A VICE investigation reveals how a little-known TV station and large sums of money were part of a lobbying strategy to polish Azerbaijan's image in Germany. https://t.co/AlA1TrF88b

Finally, here is episode two of the Armenian adventures of Turkish traveler Argun Konuk. An Armenian repat from New Jersey takes his new tourist friend to see, what else, Garni/Geghard. Argun gives a particular shout-out to the organic freshness of Armenian fruit and vegetables, and how much there is to do in such a small country. There’s also discussion about what it’s like to be an Armenian showing a Turk around the homeland and confirms what a safe place, even despite the war, Armenia is for all.

Armenia Elections: What the Electoral Code Changes Mean for the Country