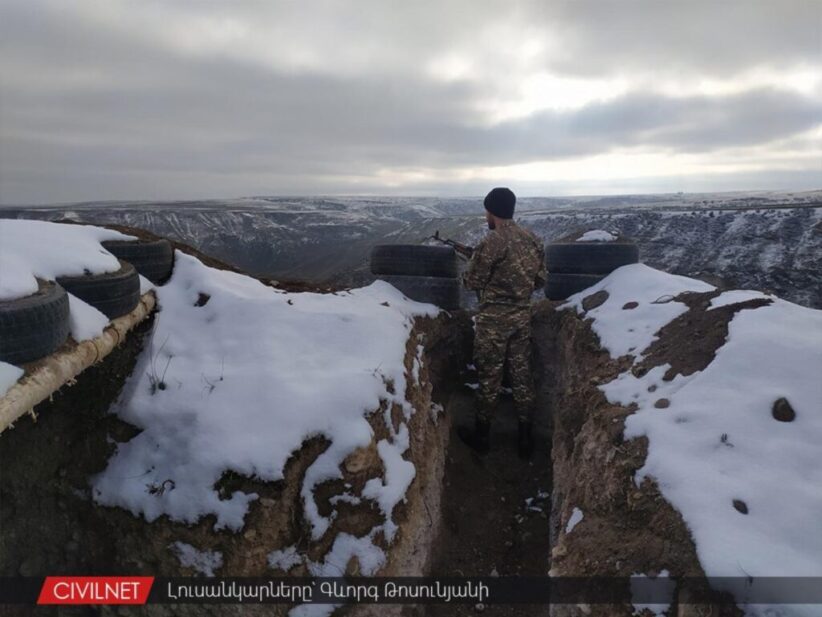 The recent incursion by the Azerbaijani armed forces several kilometers deep into Armenian territory has underscored the urgent need for both sides to delimit and demarcate their roughly 1000-kilometer-long shared border, following last year’s war in and around Nagorno-Karabakh. No clashes or injuries have been reported since the incursion. Azerbaijani troops remained stationed in Armenian territory as of this writing.

On May 12, the Armenian government confirmed that about 200 Azerbaijani troops had crossed the border into Armenia and advanced 3.5 kilometers into Syunik, Armenia’s southernmost province, near Sev Lake. Soviet-era maps of the region show that the Armenia-Azerbaijan border runs directly through the mountainous lake, whose name in Armenian means “Black Lake.” Though the maps contradict each other, all show that the majority of the lake lies in Armenian territory.

The border between Armenia and Azerbaijan officially remains undelimited and undemarcated, as does the Armenia-Georgia border. In Soviet times, these borders were internal, and so officially defining the borders between the union republics was not an issue of concern for Moscow. When the Soviet Union collapsed in 1991, defining the borders of a newly independent state was not a priority for Armenia, which was instead preoccupied with the first Karabakh war, a joint Azerbaijani-Turkish economic blockade, and civil war in Georgia, among other pressing issues.

By contrast, the Armenia-Turkey and Armenia-Iran borders, which in Soviet times formed part of the USSR’s external borders, have long been delimited and demarcated. Delimitation refers to the process by which a border is legally defined, while demarcation refers to the process of physically marking a border, such as by building a fence or wall, according to the OSCE.

On the same day that the Azerbaijani troops invaded, acting Prime Minister Nikol Pashinyan chaired an emergency session of the Security Council to discuss the events in Syunik. At the meeting, the embattled prime minister called the situation “unacceptable,” condemned the “encroachment on the sovereign territory of the Republic of Armenia,” and committed to resolving the issue “through diplomatic means.”

From 1994, the end of the first Karabakh War, to 2020, the end of the second war, the territory to the east of Syunik was controlled by Armenian forces and organized as the Shahumyan and Kashatagh provinces of the unrecognized Republic of Artsakh. During that time, the border, essentially, did not exist, and people and goods traveled freely between Armenia and Nagorno-Karabakh.

But by the time the Russia-brokered ceasefire of November 10 was announced last year, the map had changed considerably. Currently, Azerbaijani forces are in control of all the territory ringing the former Nagorno-Karabakh Autonomous Oblast, as well as parts of Nagorno-Karabakh itself. As a result, Syunik now directly faces Azerbaijani-controlled territory, stationed by Azerbaijani troops, for the first time in over 25 years.

Two days later, Pashinyan triggered Article 2 of the Collective Security Treaty Organization (CSTO) founding treaty, which commits signatories to “immediately launch the mechanism of joint consultations” when a member state is faced with a “menace to safety, stability, territorial integrity and sovereignty.” The CSTO is a military alliance founded in 1994 among Russia, Armenia, and four other post-Soviet states: Belarus, Kazakhstan, Kyrgyzstan, and Tajikistan. Before last week, Article 2 had never been triggered by a CSTO member.

The CSTO foreign ministers’ council convened in Dushanbe, the capital of Tajikistan, on May 19 to discuss the issue. At the meeting, Russian Foreign Minister Sergey Lavrov proposed establishing a joint Armenian-Azerbaijani commission to delimit and demarcate the border, possibly with Russian participation as a consultant or mediator. In response, Armen Grigoryan, the head of Armenia’s Security Council, stated that “before starting demarcation work, Azerbaijani forces must leave the territory of the Republic of Armenia.”

Negotiations between representatives from the Armenian and Azerbaijani governments to resolve the issue, slated for May 19, fell apart after the Azerbaijani side failed to attend. As of now, the situation remains unchanged.

The day before, the U.S. State Department issued a travel advisory warning citizens to “exercise caution on roads near Armenia’s border with Azerbaijan” and urged travelers to reconsider visiting “the Nagorno-Karabakh region and surrounding territories due to recent hostilities.”

In addition to the undelimited and undemarcated border, Armenia and Azerbaijan must also contend with a number of de jure enclaves that each country has in the other. Officially, Armenia has jurisdiction over one village, called Artsvashen in Armenia, that is entirely surrounded by Azerbaijani territory. Azerbaijan has three such enclaves within Armenia. But since the collapse of the Soviet Union, three enclaves have been de facto controlled by Armenia, and one by Azerbaijan.