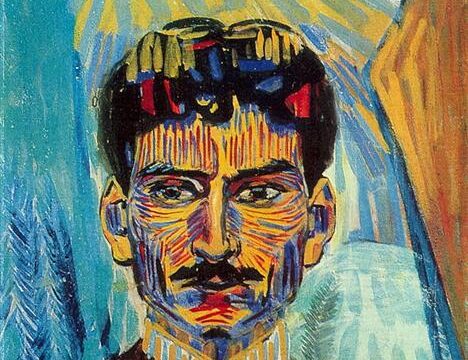 Readers of the BBC were treated this weekend to the incredible tale of an Armenian restaurant in Edinburgh, Scotland. Just steps away from Queen Elizabeth’s residence Holyrood Palace, the Aghtamar Lake Van Monastery in Exile was the restaurant whose chef owner treated his cult following to a candlelit experience described as “part exotic dining, part eccentric performance”. Then, suddenly, a decade ago the chef suddenly vanished, leaving his fans wondering what happened to perhaps the most unique dining in all of Scotland. Journalist Christopher Bobyn is on the case…

Also in the British press: enter the world of filmmaker Frunze Dovlatyan. Actor Armen Dzhigarkhanyan plays a young scientist based on a real-life pioneer of Soviet nuclear physics and first director of the Yerevan Physics Institute, Artem Alikhanian – but don’t let that staid-sounding front deceive you, it’s a romantic drama!

At a time when we are beset by very heavy problems and fear for the future, it is important to take a step back and remember the seemingly insurmountable political issues of the day are in fact transitory, beauty is timeless. Delve into the colorful world of “the Matisse of the East” Martiros Saryan and explore the ways his life and art intertwined with Armenia.

Also take a trip into the not-so-distant past, to remember a time when instead of blanket denials and rewriting history, Azerbaijan actually spoke about the Armenian Genocide:

Back to the present, history seems to be repeating itself in an eerie way. You may recall the case of Russian-Israel blogger Alexander Lapshin who was arrested in Minsk, Belarus, at the request of Azerbaijan in 2016 for having violated the infamous ban on visiting Nagorno-Karabakh without permission from Baku. President Lukashenko of Belarus allowed the extradition of Lapshin to Baku via Aliyev’s private jet, and Lapshin was sentenced to three years in prison. Three months later he was pardoned and allowed to leave, but not before being attacked in his cell in an assassination attempt which Azerbaijan claimed was self-inflicted. A complaint was filed with the European Court of Human Rights, which just this week ruled in Lapshin’s favor:

Does this situation sound familiar? If it does, that’s because just hours after the ECHR ruling against Azerbaijan, a Ryan Air plane was diverted to Belarus after a reported bomb threat, but, as it turned out, diverted so that authorities could arrest dissident journalist Roman Protasevich. The European Union has decried what has been called a “hijacking” orchestrated by President Lukashenko himself, and it is hard to ignore the experience he gained through his involvement in the Lapshin case. Lukashenko and Aliyev have very close ties, and even the Azerbaijani opposition joined in cheering on Belarus for the kidnapping:

Europe’s annual spectacle Eurovision made its grand return after being canceled last year due to the pandemic. Armenia withdrew this year due to various considerations including the recent war. Azerbaijan was there though, with a performance which some considered a front-runner, but actually ended up in a disappointing 20th place.

Besides enjoying all the camp, one other Eurovision pastime is reading the geopolitical tealeaves based on which countries vote for each other. In recent years, each country delivers two sets of scores, one determined by a jury panel and one by a national televote. Azerbaijan’s jury awarded its top score to Russia. With Russia as the regional hegemon – cultural hegemon as well – this doesn’t come as a surprise; in fact Russia & Azerbaijan traded top scores last contest. However Azerbaijan’s televote went to Israel. This was a real outlier; not only was Azerbaijan the only one to give Israel top points, almost no other country gave Israel any points at all. Due to its poor performance, one can easily see this as indication of the post-war pro-Israel fervor within Azerbaijani society. In case you were curious, the Russian jury gave Azerbaijan 8 points and the televote gave it 4. Both Israel’s televote and juries gave Azerbaijan 2 points.

Tensions on Twitter have been rising as experts of Armenian descent have been noting that no matter how peer reviewed or factually-based their work is, they are always seen as “Armenian” and thus biased, while the western analysts are lauded for their sometimes misinformed but “neutral” analysis. In just the past week, one article seemed to write off the art journal Hyperallergic’s reporting on the destruction of Armenian cultural heritage in Karabakh as an Armenian source due to the presence of one Armenian editor, while another similarly referred to the Cornell & Purdue University-led Caucasus Heritage Watch’s satellite documentation of damaged cultural heritage as an “Armenian source”. One has to question why allegedly unbiased western commentators would see fit to racialize and therefore undermine sources doing solid evidence-backed work just because a scholar working with it might be of a certain ethnicity.

By the way, if anyone knows a good Armenian craftsman, Alexis is looking to add to the next generation of Armenian chess greatness!: