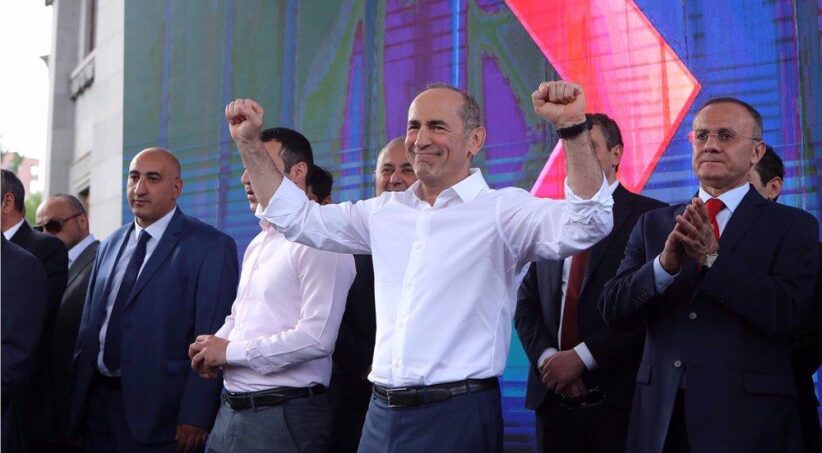 Armenia Alliance (Hayastan Dashink) is a political alliance formed in May 2021 between the nationalist Armenian Revolutionary Federation (Dashnaktsutyun) and the newly-established Reborn Armenia party (Veratsnvogh Hayastan). The alliance is running with the slogan “Towards a strong Armenia” (Depi uzhegh Hayastan).

The alliance is led by Robert Kocharyan, who served as Armenia’s second president from 1998 to 2008. Prior to serving as president, he served as Armenia’s prime minister from 1997 to 1998, invited to that post by then-President Levon Ter-Petrossian. Born and raised in Stepanakert, Karabakh, Kocharyan also served as president of the unrecognized Republic of Artsakh from 1994 to 1997. He is known for his role in the May 1992 capture of Shushi, a significant event that contributed to Armenia’s military victory in the First Karabakh War.

During Kocharyan’s presidency, various Karabakh settlement proposals were under consideration. The Key West agreement was rejected by then-Azerbaijani President Heydar Aliyev, the father of Ilham Aliyev, the country’s current president. The Common State plan was also rejected at the time. The Madrid Document remained under intense discussion and was submitted to the OSCE Depository as record of progress in negotiations.

Kocharyan’s presidency is remembered both for economic growth and for civil unrest resulting from a severe crackdown on civil protests following the disputed 2008 election, which brought Serzh Sargsyan to the presidency. Police violently dispersed protesters in Yerevan, resulting in the deaths of 10 people. In the aftermath, Kocharyan declared a state of emergency, imposed a citywide curfew, and brought army units into the capital. Acting Prime Minister Nikol Pashinyan was himself one of the organizers of the protests and was briefly jailed afterward as a result. After taking office, Pashinyan’s team charged Kocharyan with attempting to overthrow the constitutional order in the aftermath of March 1. In March 2021, the Constitutional Court dismissed these charges. Large-scale bribery charges against him remain pending.

On the domestic front, Kocharyan has pledged to prioritize the creation of new jobs and support for small and medium businesses, particularly in agriculture and the sciences. In international affairs, Kocharyan, like nearly all the other candidates, has rejected at least some of the terms of the ceasefire signed between Armenia and Azerbaijan and brokered by Russia on November 10 after last year’s war in and around Karabakh. He has also repeatedly emphasized the importance of Yerevan’s ties with its former rulers in Moscow, and he counts Russian President Vladimir Putin as a close friend.

The Armenian Revolutionary Federation (ARF) is one of the oldest Armenian political parties in existence. Founded in Tbilisi in 1890, the party played a major role in the establishment and government of the first Republic of Armenia from 1918 to 1920. Since then, the ARF has transformed into one of the main political forces in the Armenian diaspora, while its influence in Armenia itself has remained limited. Banned by then-President Levon Ter-Petrossian in 1994, the party was re-legalized in Armenia by Kocharyan in 1998. The ARF endorsed Kocharyan in both the 1998 and 2003 presidential elections, rather than putting forward its own candidate. Before the April-May 2018 Velvet Revolution, the ARF formed a coalition with the ruling Republican Party. But by April 28, all of the opposition parties in the National Assembly, including the ARF, announced their support for Pashinyan. The ARF, however, did not win any seats in the 2018 parliamentary elections that followed the revolution.

Reborn Armenia was established in March 2021 by Vahe Alberti Hakobyan, the former head of Syunik, Armenia’s southernmost region. Syunik, which borders Azerbaijan to the east and the Azerbaijani exclave of Nakhchivan to the west, has emerged as an area of intense focus following the September-November 2020 war in and around Karabakh. During his governorship from 2016 to 2018, Hakobyan was a member of the then-ruling Republican Party. Prior to entering politics, he served in a senior role at the Zangezur Copper and Molybdenum Combine, Armenia’s largest private enterprise.