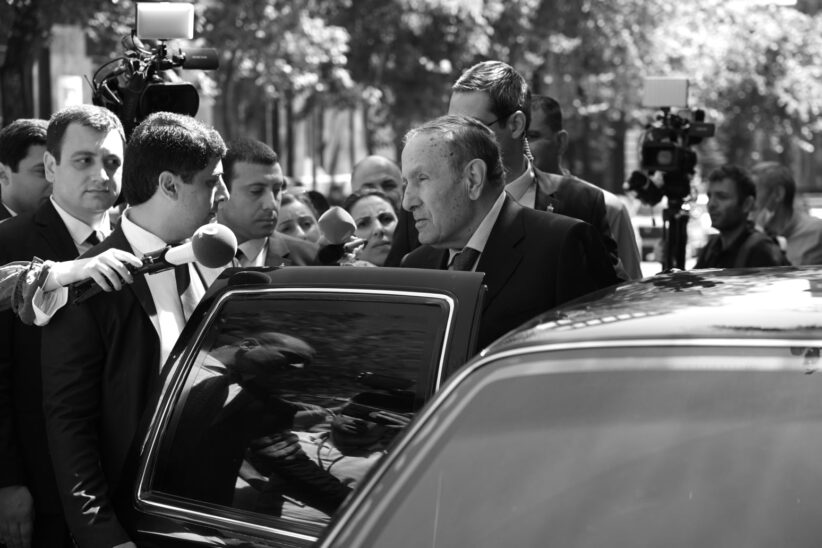 The Armenian National Congress (Hay Azgayin Kongres) is a political party formed in 2008 and led by Armenia’s first president, Levon Ter-Petrossian. The party currently has no representation in the National Assembly. The party’s slogan is “The moment to get serious” (Lrjanalu pahe), a reference to a well-known article that Ter-Petrossian penned in 1997 on the potential Karabakh settlement.

Born in Aleppo, Syria, and raised in Soviet Armenia, Ter-Petrossian emerged in the late 1980s as one of the leaders of the Karabakh Committee, a group of intellectuals who supported the aims of the Armenians of Karabakh, first for self-determination, and then to unify with Armenia. After the collapse of the Soviet Union, Ter-Petrossian was elected independent Armenia’s first president, an office he held until February 1998. The man who led Armenia during the First Karabakh War in the 1990s, Ter-Petrossian is generally considered more moderate, realistic, and willing to negotiate with Armenia’s neighbors than his successors.

For the first decade after his resignation from office — due to serious differences with the majority of senior government officials, including then-leader Robert Kocharyan, in their approaches to resolving the Karabakh conflict, Ter-Petrossian remained silent. But in 2008, he re-entered politics and made a failed run to recapture the presidency. It was the fallout from that disputed election, which Serzh Sargsyan won, that led to the post-election strife and police violence that led to the deaths of 10 people on March 1, 2008.

Since Armenia’s disastrous defeat in the September-November 2020 war in and around Nagorno-Karabakh, Ter-Petrossian’s name has once again been in the headlines. He has repeatedly criticized his successors’ Karabakh policies, saying that “maintaining the status quo and refusing compromise” has led “to the catastrophe Armenia faces today.” In December 2020, he even went so far as to say that “the danger of a civil war [is] threatening our country.”

Earlier this month, Ter-Petrossian publicly shared private conversations about the possibility of forming an electoral alliance with the other two former presidents — and his bitter rivals — Kocharyan and Sargsyan. Both men rejected the proposal, at least in part because Ter-Petrossian insisted that the three should declare that they personally will not hold office in the new government.

By the collapse of the Soviet Union, the Karabakh Committee, in which Ter-Petrossian had played a leading role, had morphed into the Pan-Armenian National Movement political party, the predecessor to the Armenian National Congress (ANC).

From 2008 to 2013, during Serzh Sargsyan’s first term as president, the ANC functioned as Armenia’s main opposition party, while Ter-Petrossian organized mass rallies against the Sargsyan government. But since parliamentary elections in 2017, the party has had no representation in the National Assembly.

Ter-Petrossian has stated that the ANC has two main goals in the upcoming election: one, to unseat current acting Prime Minister Nikol Pashinyan, and two, to ensure that former President Robert Kocharyan is unable to reassume power.