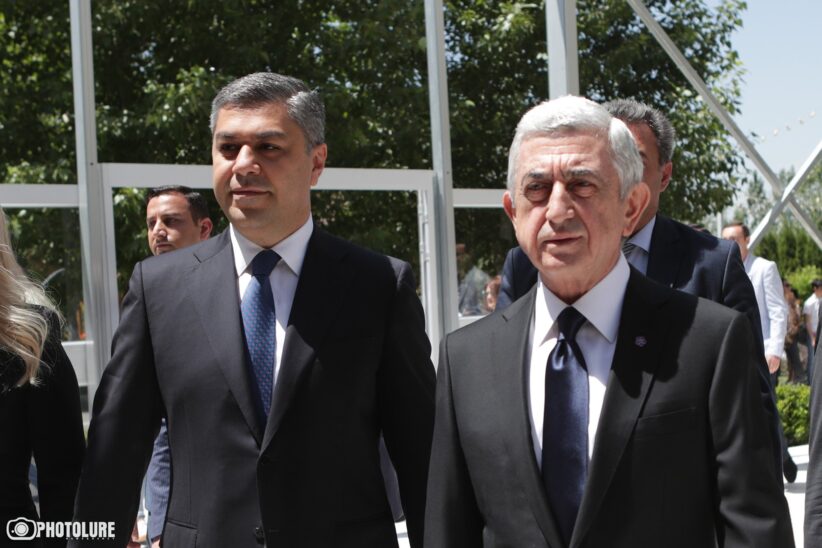 The I Have Honor alliance (Pativ Unem Dashink) is a political alliance formed in May 2021 between the Republican Party (Hanrapetakan Kusaktsutyun), led by former President Serzh Sargsyan, and the Homeland Party (Hayrenik Kusaktsutyun) of Artur Vanetsyan, the former head of the National Security Service. The alliance is running under the slogan “Stand tall. Let’s get to work so we can live!” (Ughghir mejkd. Kpnenk gortsin, vor aprenk!).

Artur Vanetsyan, from Yerevan, served as the head of the National Security Service from 2018 to 2019. He is also the founder and leader of the Homeland Party, formed in 2020. Though Vanetsyan served as Armenia’s security head under Pashinyan, the two men have had a dramatic falling-out following Vanetsyan’s dismissal. Since then, Vanetsyan has proven highly critical of Pashinyan’s government and has repeatedly called for him to step down.

In November 2020, just days after the Russia-brokered ceasefire between Armenia and Azerbaijan came into effect, Vanetsyan was among nearly a dozen opposition figures briefly detained for allegedly “organizing illegal violent mass disorder.” The charge stems from the activities of the Homeland Salvation Movement, an umbrella group of 17 opposition parties that opposed the terms of the ceasefire and held large rallies in Yerevan in the weeks after the war’s end. Both the Republican Party and the Homeland Party joined the group at the time.

Artur Vanetsyan founded the Homeland Party in May 2020. At the time, he said, “We need to lay the foundations for security, stability and progress of our people and country with rule of law and democracy as the benchmarks.” The party currently has no seats in the National Assembly.

Both Vanetsyan and Sargsyan have branded the I Have Honor alliance as a vote against acting Prime Minister Nikol Pashinyan. They have repeatedly called for Pashinyan to resign or be removed from power, calling him “the capitulator,” in reference to Armenia’s disastrous performance in last year’s war in and around Karabakh.

“We will remove and hold accountable the capitulators who have discredited and humiliated our state and knelt before the enemy,” Sargsyan pledged. Meanwhile, Vanetsyan warned that “we are faced with the real threat of losing statehood.” The alliance’s platform stresses security and peace in Karabakh.

Interestingly, the alliance is putting forward Vanetsyan, the former national security chief, as its candidate for prime minister, rather than Sargsyan, the former president. Sargsyan has explained the decision by saying that “I believe that I have finished my service to Armenia and the Armenian people in high-level state positions.”

Serzh Sargsyan served as Armenia’s third president, beginning in 2008 and ending in 2018, when he took on the position of an executive prime minister, according to the new constitution over whose adoption he had presided, in order to circumvent the two-term limit on the presidency. The April-May 2018 Velvet Revolution was, at least in part, a response to that move, and on April 22 Sargsyan resigned in response to massive street protests. Like his predecessor, Robert Kocharyan, Sargsyan is from Karabakh. And like Kocharyan, Sargsyan’s name has been tainted for many Armenians by the violent crackdown on protesters that took place on March 1, 2008, immediately after Sargsyan’s election. The violence left 10 dead and many Armenians distrustful of the then-ruling Republican Party.

The Special Investigative Service leveled charges of “embezzlement on an especially large scale” against Sargsyan in 2019. The case is still in the courts.

Throughout that time, critics and party members alike lashed out at widespread corruption, bribery, and nepotism associated with the Republican Party. Numerous oligarchs and other prominent businesspeople in Armenia were connected with the party at the time. The Republican Party has also faced accusations of vote-buying and election fraud.

In the December 2018 elections held after the Velvet Revolution, the Republican Party garnered less than 5% of the vote, falling below the electoral threshold needed to enter the legislature. This is the first time that the Republican Party has had no representation in the National Assembly since the 1990s.