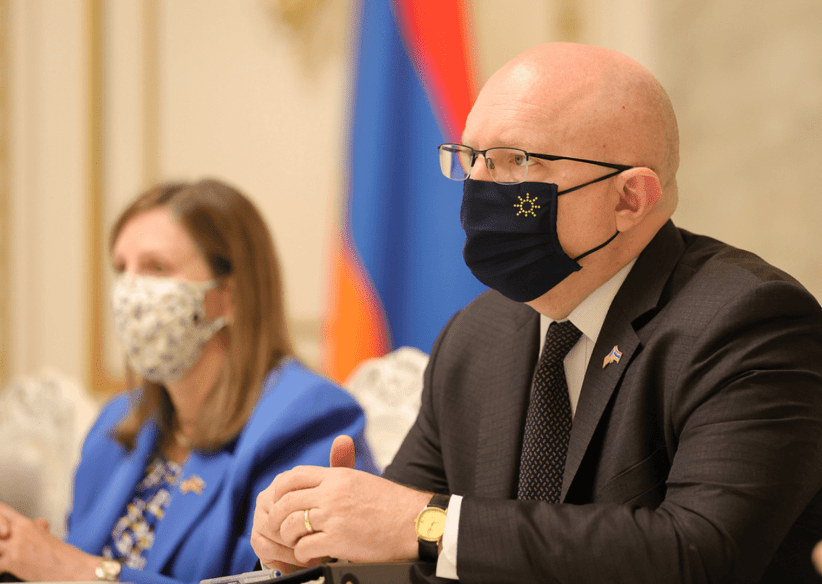 US Acting Deputy Assistant Secretary of State for European and Eurasian Affairs Philip Reeker held talks with Armenia’s Acting Prime Minister Nikol Pashinyan in Yerevan on June 10. Reeker reaffirmed to Pashinyan that the US, as Co-Chair of the Minsk Group, is ready to participate in the peaceful settlement of the Nagorno-Karabakh conflict and will continue to demand the return of Armenian POWs.

The OSCE Minsk Group is a body set up in 1992 to encourage a peaceful settlement of the Nagorno-Karabakh conflict, and consists of three co-chair countries, France, the United States and Russia.

Reeker is coming to Yerevan from his visit to Baku, where, referring to Azerbaijan’s recent incursions in Armenia’s Syunik region, he stated that, “The United States considers any movements along the non-demarcated areas of the international border between Armenia and Azerbaijan to be provocative and unnecessary. We reject the use of force to demarcate the border and call on both sides to return to their previous positions.”

The ensuing incursions have resulted in one Armenian serviceman being killed, six being taken prisoner, and 19 injured.

In Yerevan, both Pashinyan and Reeker noted the importance of the OSCE Minsk Group Co-chairs in mediating negotiations between Armenia and Azerbaijan.

Reeker meanwhile praised the development of democratization processes in Armenia and called the 2018 parliamentary elections “exemplary.” He noted that the US is ready to assist Armenia in implementing democratic reforms.

Pashinyan, in his turn, expressed his appreciation for US President Joe Biden’s decision to officially recognize the Armenian Genocide on April 24, 2021.

In addition to Baku and Yerevan, Reeker also traveled to Tbilisi, Georgia, as part of the U.S.’s efforts “to advance bilateral and regional priorities and to express U.S. support for democratic and economic development across the region.”

Buy Armenian – An Online Marketplace for ‘Made in Armenia’ Products