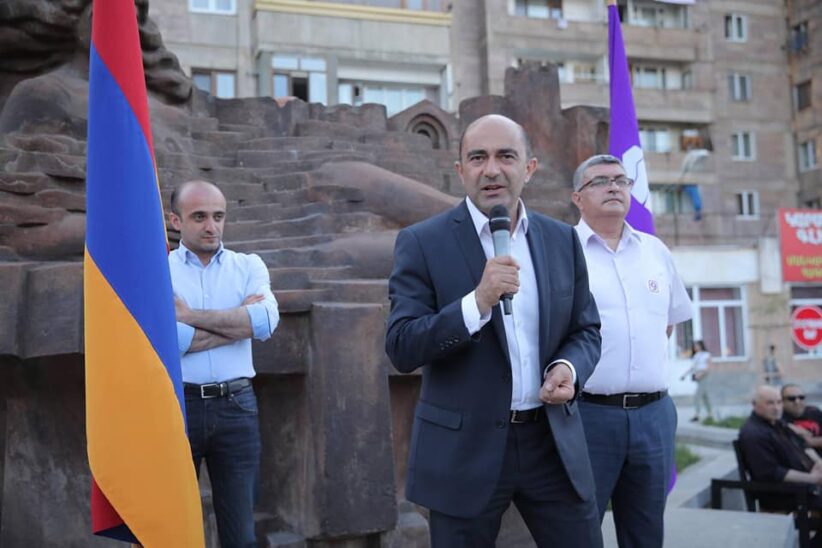 The Bright Armenia Party (Lusavor Hayastan Kusaktsutyun) was founded by then-independent lawmaker Edmon Marukyan in 2015. Alongside Prosperous Armenia, Bright Armenia is one of two opposition parties with representation in the current legislature. In the most recent parliamentary elections in 2018, Bright Armenia won 17 seats in the National Assembly. This year, the party is running under the slogan “There is an alternative — vote!” (Ka aylentrank, kvearkir!)

Edmon Marukyan was born and raised in Vanadzor, Armenia’s third largest city and the regional capital of the northern province of Lori. A lawyer by education, Marukyan was involved in human rights activism and civil society building in Armenia in the 2000s. In 2012, he entered the National Assembly as an independent lawmaker, unaffiliated with any political party, as the representative for Vanadzor’s electoral district. He founded Bright Armenia three years later and has served as the party head ever since.

After Armenia’s defeat in last year’s war in and around Karabakh, Marukyan, like numerous other opposition figures in the country, called on now-acting Prime Minister Nikol Pashinyan to resign. In a speech earlier this week, Marukyan stressed that his main priority is ensuring national unity in the aftermath of the war, saying that “We will do everything for national consent and unity to win, because if unity doesn’t win, the enemy will defeat us.” Marukyan has also been particularly outspoken in recent months on the issue of Armenian prisoners of war held captive in Azerbaijan.

Formed in 2015, Bright Armenia first won seats in the National Assembly in 2017, when it ran with Pashinyan’s Civil Contract and Aram Sargsyan’s Hanrapetutyun Party as the Way Out Alliance (Yelk Dashink). The alliance secured 9 of 105 seats in that vote. In the 2018 parliamentary elections, Bright Armenia ran alone and gained 17 of 132 seats.

The party has long called for deeper relations with the European Union and opposed Armenia’s membership in the Eurasian Economic Union, the Russia-led economic bloc uniting five post-Soviet countries in an integrated single market. Nonetheless, Bright Armenia has also underlined the importance of Armenia’s strategic relationship with Russia and the need for Yerevan to maintain positive cooperation with Moscow.

Although Marukyan joined his opposition colleagues in calling for Pashinyan to resign after Armenia’s defeat in the September-November 2020 conflict, Bright Armenia notably did not join the Homeland Salvation Movement (Hayreniki Prkutyan Sharzhum), an umbrella group of over a dozen opposition parties formed in December 2020. The group was founded to advocate for Pashinyan’s removal from power and the installation of a caretaker prime minister without waiting for an election.