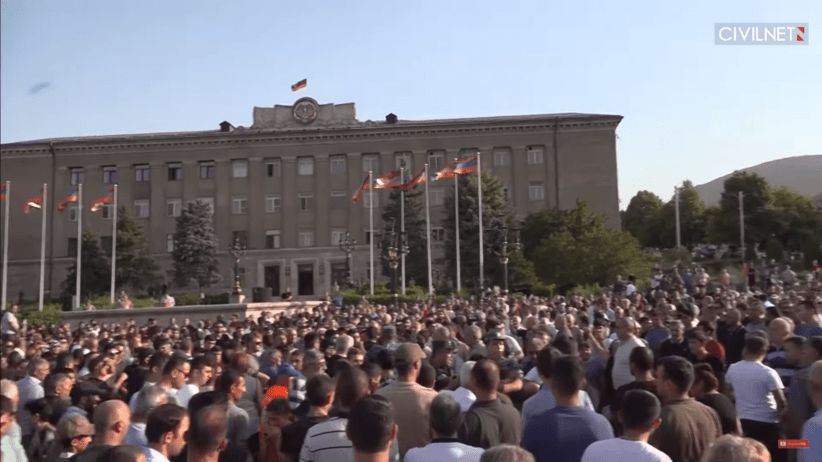 On June 21, the day after Nikol Pashinyan’s landslide victory in Armenia’s snap parliamentary elections, a protest broke out in Nagorno-Karabakh’s capital Stepanakert. Karabakh’s president Arayik Harutyunyan’s congratulatory message to Pashinyan caused a public outcry and made hundreds of people take to the Renaissance square in Stepanakert.

Pashinyan has been an extremely unpopular figure in Artsakh since the end of the Second Karabakh war. He is generally viewed as the symbol of the last fall’s humiliating military defeat and there is an anecdotal evidence, suggesting that large swaths of the society in Artsakh were rooting against him during the latest elections in Armenia. Harutyunyan’s message to Pashinyan and the fact he was spotted at the headquarters of the ruling Civil Contract Party in Yerevan on the election night was seen as an insult by many. They used this formal occasion to express their grievances and demand the resignation of the president.

On the first evening of the protest, different groups of activists took center stage. Most of the speeches were angry and emotional. The protestors were calling the president a ”traitor” and demanding his immediate resignation. Harutyunyan, who was still in Yerevan, wrote a Facebook post, promising to address the public the next day.

Two opposing rallies were announced on June 22. Arayik Harutyunyan started his rally at 6 pm in front of the presidential palace at the Renaissance square, surrounded by a couple of thousands of loyalists and public employees. He gave a speech to an indifferent crowd, explaining his behavior during the war and in the post-war period. Harutyunyan claimed he wasn’t clinging to power but would not resign in a difficult period for the country.

The opposition rally started at 7 pm at the same place. Representatives of two groups emerged as ‘spontaneous’ leaders of the protest.

The first group is closely affiliated with the former ‘siloviki’ elite of the country which lost its power and influence in Karabakh after Armenia’s “velvet revolution”. These generals were spotted at the campaign events of Armenia’s two now oppositional former presidents – Serzh Sargsyan and Robert Kocharyan. Some of them have been very vocal in their criticism of Nikol Pashinyan. Their associates at the rally also had a more aggressive attitude towards Pashinyan.

The other group is Karabakh’s less organized opposition, which has been opposed to both Harutyunyan and the aforementioned generals since 2018. A speech given at the rally by one of the representatives of this group, targeting not just Arayik Harutyunyan, but also Artsakh’s former security elite, became a controversy which resulted in a leadership split. Protestors and activists associated with the ”siloviki” camp boycotted the rally on June 23, causing a dramatic decrease in turnout.

The real reasons behind this wave of protest are obvious. Stepanakert has been full of displaced people for the last several months and the state does not have the capacity to immediately resolve all the social issues caused by the war. Moreover, there are also legitimate concerns that the pre-war nepotism practices haven’t been completely uprooted even after the autumn debacle. This environment is conducive to social protest. And there are forces that are willing to utilize the grievances of large segments of the society for their own revanchist goals.

After a disastrous war, the demand for the president’s resignation might be logical but there are a couple of risks that should be taken into account by all parties concerned.

Nevertheless, it is clear that there is an atmosphere of uncertainty in Artsakh. The lack of trust towards the government of Armenia is widespread. People do not know what to expect from the future. Some are considering out migration. If Armenia’s authorities are willing to placate these concerns, they must convey the message to the Karabakh society that no process with Turkey and Azerbaijan will take place at the expense of the fundamental rights of Artsakh and its people.

In video: the protest in Stepanakert on June 23.