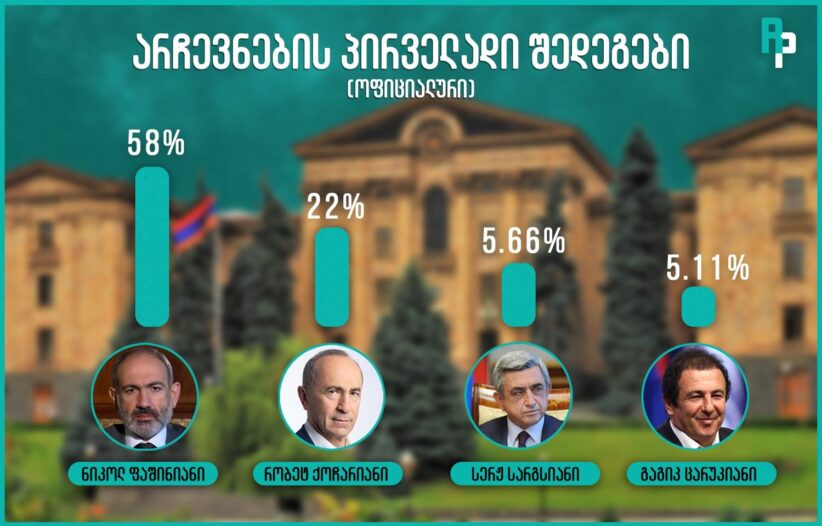 The Georgian public closely monitored the Armenian parliamentary elections, as well as the country’s pre-election and post-election processes. Georgia’s opposition and civil society, both of which are sympathetic towards Nikol Pashinyan, drew parallels between Armenia and Georgia’s 2019 elections.

Giorgi Kanashvili, a specialist in conflicts and regional issues, tells CivilNet that the sympathy towards Nikol Pashinyan is conditioned by the fact that Georgians perceive him as a pro-Western figure.

“There is sympathy for Pashinyan in Georgia because he is considered a democratic politician, and people believe that a democratic Armenia is better both for Georgia and the region,” Kanashvili said.

Zaza Abashidze, one of the few Georgian journalists covering the elections who has been in Armenia for more than a week, says that for Georgians, the most interesting aspect of the elections was that all previous presidents were participating.

“Unfortunately, acts of political revenge have not ended in Georgia. Despite the fact that there have been attempts to arrest former Armenian presidents, all of them were still in the country, participating in the elections. This is a bit unusual for us,” Abashidze said, noting that former Georgian President Mikheil Saakashvili had been sentenced in absentia and cannot return to Georgia. And, the first president, Zviad Gamsakhurdia, has been assassinated.

Abashidze also says that the Central Electoral Commission of Armenia (CEC) was more organized than in Georgia, and that the Live broadcasts from polling stations is a good example of transparency.

“Transparency, finances, media, and other components needed to hold democratic elections were protected, unlike in Georgia. And, in my view, the main electoral violations were committed by the supporters of the opposition, in particular, Kocharyan’s supporters. This is also strange for us,” Abashidze adds.

According to him, Georgian society sees in Pashinyan what it wishes to see in Georgia.

Another journalist covering the Armenian election, Aka Zarqua, who is the editor-in-chief of Realpolitik periodical, says that the most intriguing factor was that despite the defeat in the war, and considering that all three former presidents were opposing Pashinyan, Pashinyan’s party still won.

“If before Georgia was considered the region’s center of democracy, now, Armenia also belongs in this category. This was already the second free and democratic election,” said Zarqua.

Armenia Extends Ban on Some Turkish Imports By Another Six Months