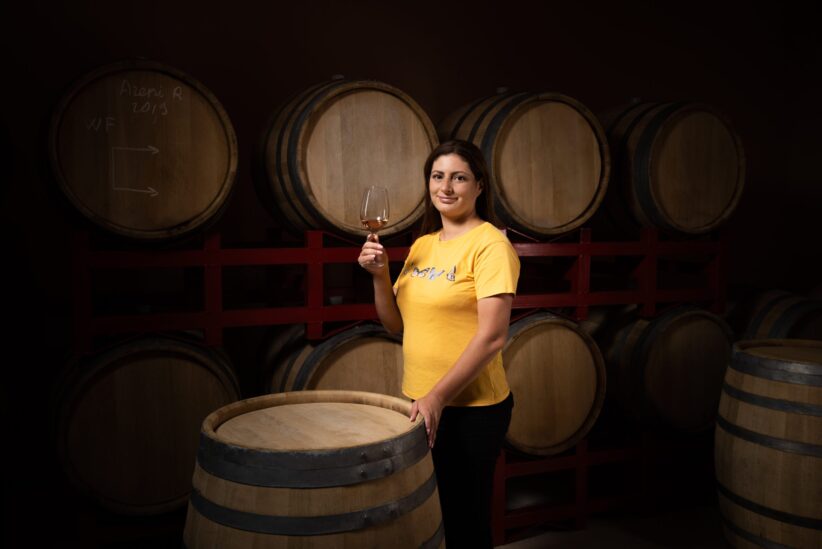 Thus, the aim of the Wine Incubation Project is to create new opportunities for persons displaced from Syria and local women in the wine sector․ As a result of the project, 6 new Syrian Armenian and female winemakers have entered the local wine market. Below is the story of Liana Mehrabyan

“I’ve loved winemaking since childhood. As a child, we lived in a private house and my grandfather produced homemade wine. I used to observe him making wine as I was curious about the whole process”.

Liana Mehrabyan is a winemaker by profession. She graduated from the Agrarian University in 2013, afterwards working at the brandy factory in Ararat region. A year ago, Liana made up her mind to “go back to the roots” trying her hand at winemaking again.

“My mom has always repeated that winemaking is not for a woman – it’s a man’s job. However, I’ve decided to prove that a woman can also become a successful winemaker and achieve a lot in this field”, says Liana.

Learning about the intensive course on winemaking from the Facebook page of the Agrarian University, Liana decided to apply. After the application had been accepted, she became one of the 22 participants.

“The intensive course was more of a re-training for me as I already got knowledge about this field at the university. However, I wanted to get acquainted with the new, modern, upgraded methods and trends in the sector”, notes Liana adding that the lectures were really very informative, saturated, innovative and interesting.

Liana successfully passed the phase of the trainings and was offered to take part in the Wine Incubation Project.

“It came as a big surprise for me to find out there was a second stage and we would be able to start our own business. I could never imagine I would have a chance to produce my own wine, have my own business and brand and this was indeed a delightful surprise for me”, says Liana, smiling.

Liana and other participants, on the one hand, applied their knowledge acquired from the trainings to produce their wines, on the other – gained new skills to develop their businesses.

“I was craving to produce wine from a historical grape variety. I was very happy to learn we could produce wines from Areni grapes. We took part in the harvesting in Vayots Dzor, did selective harvesting, then processed the grapes to produce rosé wine. My wine is not aged: it’s light and good for daily use”, says Liana with excitement.

The rosé will be labelled “Aura”. She notes she came up with the idea while thinking about the energy of wine.

“The title represents the very meaning of the word (Latin “aura” meaning the surrounding energetic field of a person), as the rosé can bring very positive vibes and aura to people. It is also female and delicate as “Aura” is also a female name reflecting the character of the wine – graceful and feminine”, she notes.

With rosy being the dominant colour of the label, the very look of it already raises one’s spirits. The label also features a vineyard and pink sunset.

“The tints of the vineyard hint that it’s autumn, a harvest time. The pink sky gives off the vibes of peacefulness, high spirits and hope for a bright and good tomorrow”, explains Liana.

Over some period, Liana has been engaged in selling wines, which is why she is aware when and how to sell it. However, the wine with a story sells best of all. This is her main challenge while producing a wine and starting a business.

“If wine doesn’t have a story it won’t sell well no matter how much effort and investment you put to produce it. It seemed to be hard, but we got it over as the project also helped us create the story”, says Liana.

She has decided to develop as a winemaker and expand her business. Her husband and the whole family support her decision which is the most important thing for her. In near future, she is planning to purchase land and plant her own vineyard to produce wine from her own grapes.

The revenue from sales of the first batch of “Aura” will be invested in the business development.

“We have already ordered the second batch. We have bought Areni grapes from Vayots Dzor and will produce from the same variety. However, I hope very soon we will be able to increase the volume, enrich the varieties and produce wines from other varieties as well”, stresses Liana.

Being successful as a winemaker has become a major goal for Liana. She wants to prove winemaking is not the prerogative of men. By developing her business, she will soon show that women can also become successful winemakers.