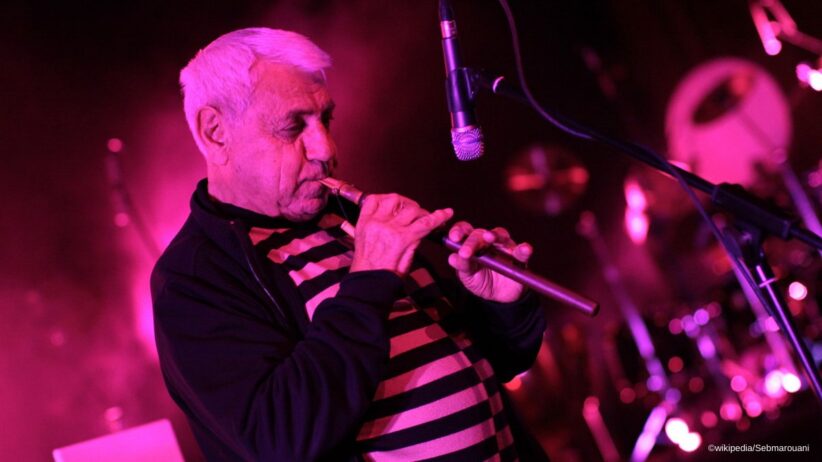 The Armenian world and beyond mourned the loss of a legend this past week with the passing of dudukist Djivan Gasparyan. The duduk’s mournful sounds have long been a part of Armenian culture, but it was Gasparyan who helped introduce it to global audiences for whom it has come to symbolize deep feelings of solitude, sadness, and Middle Eastern mysticism.

Gasparyan had been the duduk soloist for the Yerevan Philharmonic Orchestra for decades, having taught himself to play as a young boy from watching village elders. Both he and the duduk’s profile rose immensely when Peter Gabriel utilized his playing of it for the soundtrack to The Last Temptation of Christ in 1988. Gabriel posted a tribute to Gasparyan on his website:

Another major movie to feature Gasparyan’s duduk was Gladiator (2000) composed by Hans Zimmer.

This tribute to Gasparyan from PRI’s The World contains an interview with Zimmer discussing their collaboration.

The duduk has since gone on to be featured in numerous other feature films but also many television series, video game scores, and popular music. UNESCO, which inscribed the duduk as a Masterpiece of the Intangible Heritage of Humanity in 2005, also tweeted a remembrance:

Also of note, the Peoples’ Democratic Party (HDP- Turkey’s pro-minority political party) tweeted a remembrance and one of its MPs Meral Danış Beştaş gave a speech about him in the Turkish Parliament.

Another remembrance this week was published in the New York Times, which highlighted the late Vartan Gregorian among various immigrant stories “celebrating the essential contributions of immigrants to American life” in honor of the July 4 American Independence Day.

One tweet which gained a great deal of attention in recent days has been this announcement by the historical YouTuber Kraut. With over 350,000 subscribers and videos which easily get more views than that (a video from last year called “The Turkish Century: From Hittites to Ataturk has over a million views), Kraut’s videos have a large following. They got the attention of a Turkish digital agency which reached out to him asking how much money he required to make one of his popular videos about denying the Armenian Genocide. The full story is here:

Kraut rejected the request and exposed it, asking all other creators to do the same, if not for moral reasoning then at the very least for the sake of maintaining their own credibility. At least one other creator came forward to say he was made the same offer and also turned it down. Something to watch for: while one might think Biden’s definitive recognition of the genocide in April would put an end to the Turkish government’s major financial investments in trying to deny the genocide, apparently that isn’t the case. It will be important to monitor various social media platforms to see if any content creators take a sudden interest in exploring “alternative histories” to 1915.

UPDATE: After our roundup was published, Kraut updated the story stating that the Turkish company denies involvement in the offer to pay him for a genocide denial video. 365 Decere Digital Agency investigated the situation and claims a hacker who infiltrated their email system was responsible for making the offer.

Speaking of corruption, new laws in the United Kingdom aimed at international money laundering syndicates and unaccounted wealth such as the notorious buying “Azerbaijani Laundromat” have begun taking effect. DJ Mikaela, a cousin of Azerbaijan’s President Ilham Aliyev, had used 20 opaque mostly offshore companies to receive millions of dollars. While it is a positive step that such influence buying, which has been on blatantly on display by members of the European Parliament, German Bundestag, and numerous other parliaments, is being prosecuted, but the ruling lacks the full accountability one would hope:

As we mentioned in our previous edition, the alleged MP in the Azerbaijani parliament and his staff have started up a hotline for Karabakh Armenians to call to “get assistance” directly from the Azerbaijani government. While posing as wanting peace with Armenians, the MP routinely posts anti-Armenian tweets, as he demonstrated once again on his trip this week to parts of Nagorno-Karabakh which Azerbaijan seized in the recent war.

Most disgustingly, the MP flexed his “reconciliation muscles” by making a celebratory pose with the new “Iron Fist” monument placed in the center of the now-deserted Armenian town of Hadrut, the very place where in October social media accounts brought us terrifying videos of the last remaining Armenian civilians being executed at that very spot. What’s more, this close-up shot of the monument revealed that the fist is actually supported by none other than the drones and UAVs which made this ethnic cleansing possible. The weapons’ names are inscribed upon them, including that of the notorious “İti Qovan”, which translates in Azerbaijani to “dog chaser”, the name Aliyev gave to his weapons as they chase the [Armenian] dogs out of Karabakh. This tweet naturally caused a great deal of outrage and consternation, to which the MP’s assistant (and hotline operator) Samir Mammadov Ahadoglu came to his boss’s aid with a tweet which somehow managed to be even more outrageous:

The attempt to portray a statue made up of aerial bombers which ethnically cleansed the town as somehow following in the footsteps of Martin Luther King’s principles of non-violence was too much even for many Azerbaijanis who couldn’t help but ridicule the embarrassment. Ahadoglu and Ganjaliyev are always out in front meeting with international journalists and politicians when visiting Baku, trying to sell the world on their “peaceful” intentions towards their Armenian “constituents”, while completely discrediting themselves with such outlandish tweets. It’s more than enough to make Armenians question how they are ever supposed to live as citizens under authorities like this that celebrate their destruction.

Hopefully the world is starting to pay attention however, with tweets like the above from the US Commission on International Religious Freedom and from Governor Sam Brownback who was the US Ambassador at Large for International Religious Freedom. These tweets were in response to the new publication of Cornell’s Caucasus Heritage Watch’s first monitoring support summing up the destruction or endangerment of churches, cemeteries, and mosques that have come under Azerbaijani control.

Finally, as Conan O’Brien recently wrapped his 28 years in late night, we leave you with a retrospective from #TeamCoco on some of his assistant Sona Movsesian’s greatest moments on the show, including sheepherding in Armenia!