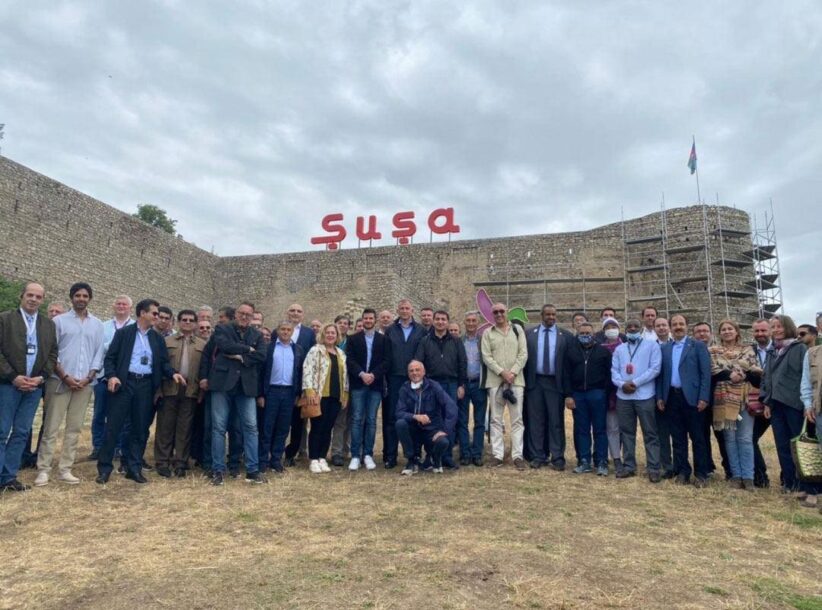 On July 9, diplomats and representatives of international organizations accredited in Azerbaijan visited Shushi, Karabakh’s second city, at the invitation of the authorities in Baku. Countries whose representatives visited the city included close allies of Azerbaijan, like Israel, Pakistan, and Turkey, as well as fellow post-Soviet countries, including Georgia and Ukraine. Notably, ambassadors representing Belarus, Kazakhstan, and Tajikistan — all military allies of Armenia as member states of the Russia-led Collective Security Treaty Organization — were also present. Additionally, diplomats from numerous Asian and European countries, like China and Poland, took part.

But among the over 100 diplomats from nearly 50 countries who made the trip, the representatives of three countries were conspicuously absent: France, Russia, and the United States. Those three countries are the three co-chairs of the Minsk Group, which was formed by the Organization for Security and Cooperation in Europe during the first Karabakh war in the 1990s and is meant to encourage peaceful resolution of the conflict between Armenia and Azerbaijan.

According to haqqin.az, a pro-government Azerbaijani news website, the “ambassadors of these countries did not accept the invitation of the government of Azerbaijan and refused to go to Shusha,” using the Azerbaijani name for the city, which was declared Azerbaijan’s “cultural capital” in January. Haqqin.az described the trip as “organized on the personal instructions of Ilham Aliyev,” the president of Azerbaijan. According to Azerbaijani media, the trip was arranged “to familiarize the foreign diplomats” stationed in Azerbaijan with the territories in and around Karabakh.

Azerbaijani media reported that the diplomats traveled to Shushi on Victory Road, a highway leading to the mountaintop city that the Azerbaijani government began building after capturing it at the end of last year’s war in and around Karabakh. The delegation also reportedly visited an international airport under construction in the city of Fizuli, also called Fuzuli in Azerbaijani.

The absence of French, Russian, and U.S. representatives on the visit has “caused serious discontent in Azerbaijani society,” according to JAMnews, a media platform that focuses on the Caucasus region.

“The ambassadors of the United States, Russia, and France should be subjected to official and public disregard until they go to Shusha,” said Tofig Zulfugarov, who served as Azerbaijan’s foreign minister in the late 1990s.

“They are giving a message about their intention to continue negotiations on the status” of Karabakh, he continued. “I cannot find the second meaning to the fact that the ambassadors of the OSCE Minsk Group co-chairing countries refuse to travel” to Shushi.

Meanwhile, multiple diplomats who did visit Shushi posted about their experiences on Twitter.

“Happy to be at Shusha, the crown jewel of Karabagh & the cultural capital of Azerbaijan,” wrote Bilal Hayee, Pakistan’s ambassador to Azerbaijan. “I send greetings and well wishes to all my Azerbaijani friends. May you all visit this beautiful land of yours soon.⁦”

Pakistan is one of the few countries in the world that does not have diplomatic relations with Armenia, along with Azerbaijan, Hungary, Saudi Arabia, and Turkey, among others.

“Together with the diplomatic corps in Azerbaijan, I had the historic privilege of being the first Israeli Ambassador to visit the remarkable city of Shusha,” wrote George Deek.

And Ukraine’s ambassador to Azerbaijan, Vladyslav Kanevskyi, posted: “Dream comes true! I visited the city of Shusha, the heart of Karabakh and the spiritual capital of Azerbaijani people! This is both the first acquaintance with the great historical & cultural heritage of Azerbaijan as well as large-scale reconstruction projects of liberated territories.”

In a statement, the Foreign Ministry of the unrecognized Republic of Artsakh condemned the diplomats’ visit to Shushi, saying that “by such actions, Azerbaijan is trying to consolidate the results of the aggressive war it unleashed…against the Republic of Artsakh.”

“The city of Shoushi is an integral part of Artsakh both in territorial, cultural, economic and historical aspects,” the statement continued in part. “Any attempt to separate it is a gross violation of the territorial integrity of the Republic of Artsakh.”

Diplomats accredited in Azerbaijan have made six other trips to territories in and around Karabakh since the end of last year’s war.