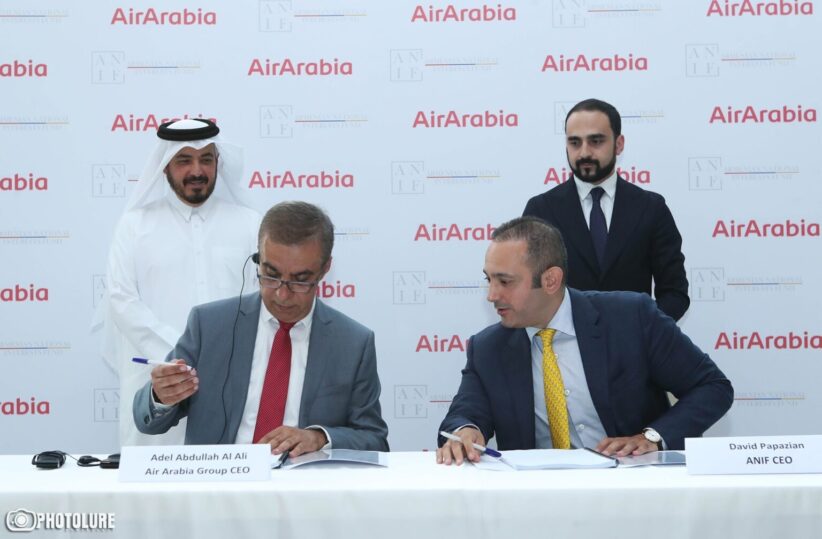 An agreement signing ceremony on the establishment of a new national airline took place at Armenia's Zvartnots International Airport.

Armenia’s government announced on July 14 that it will establish a new national airline carrier. The news follows an agreement signed between the State Interests Fund of Armenia (ANIF) and an Emirati low-cost airline Air Arabia.

Armenia’s Acting Deputy Prime Minister Tigran Avinyan and Sheikh Abdullah bin Mohammed al-Thani, the Chairman of the Board of Directors of Air Arabia, took part in the signing ceremony that will see the establishment of the new airline carrier.

“As a low-cost airline, the new national airline carrier will contribute to the growth of tourism and stimulate the development of related sectors,” said Avinyan, noting that the process to obtain the air operator’s certification, which is necessary for the airline to start operating, will begin soon.

Avinyan said additional details on the airline’s launch date and destinations will be announced in the near future.

Air Arabia is the largest budget air carrier in the Middle East and North Africa. The airline currently operates flights to 170 destinations. Air Arabia and Armenia’s State Interest Fund will now set up a joint venture to operate the new airline.

Acting Prime Minister Nikol Pashinyan, too, held a meeting with Chairman al-Thani, assuring that Armenia will use the necessary tools to support the new national carrier, which he believes will boost passenger traffic, attract investment, develop tourism and provide high quality services in the aviation sector.

Armenia previously had a national carrier, Armavia, but the airline filed for bankruptcy on March 29, 2013, and suspended operations on April 1, 2013.

The public has been invited to submit ideas for the name of the new carrier by August 14.