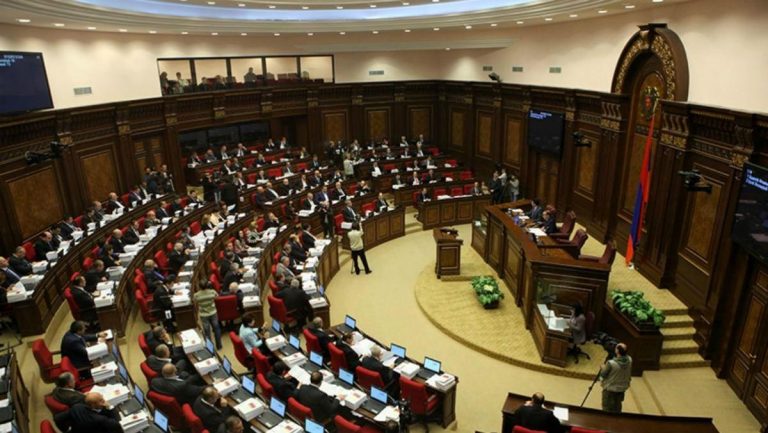 National Assembly Speaker Alen Simonyan, a close ally of Prime Minister Nikol Pashinyan, introduced changes to the Armenian parliament’s security rules on Tuesday under which reporters will no longer be allowed to enter the legislative chamber without advance permission. Additionally, members of the press will now be permitted to interview lawmakers only in a designated area.

Opponents of the changes have expressed concerns that the move effectively restricts journalistic activity in the legislature. Simonyan has hit back against such criticism.

“Using the word ‘restriction’ is incorrect, because this is about the coordination of [journalistic] work,” he said. “We have had a problem for years in that journalists are forced to run after deputies in the hallways, and there have been incidents when deputies have threatened and slapped journalists.”

This is the first week that Armenia’s new legislature is sitting following snap elections in June. Pashinyan’s Civil Contract party retained its parliamentary majority in that vote, though it lost seats. The new National Assembly, as Armenia’s parliament is officially known, is composed of 71 Civil Contract lawmakers, 29 representatives of the Armenia Alliance, and 7 lawmakers from the I Have Honor Alliance.

The vote, held over six months after Armenia’s disastrous defeat in last year’s war with Azerbaijan in and around Karabakh, was deemed “free, competitive, and fair” by the Organization for Security and Cooperation in Europe.

Observers have criticized the new parliament for apparently moving to erode freedom of speech, rather than working to address Armenia’s many problems, not the least of which includes ongoing border skirmishes with neighboring Azerbaijan.

In a separate development during the outgoing parliament’s final session last Friday, Armenia’s lawmakers approved an amendment to the Criminal Code that would criminalize “grave insults.” Seventy-five out of 132 representatives voted in favor of the bill.

If the legislation were to go into effect, “individuals making ‘grave insults’ or offending others’ dignity in an ‘extremely indecent manner’” would face fines of up to half a million drams, equivalent to roughly $1000.

The law defines public figures as politicians, government officials, and civil society activists, among others, according to Radio Azatutyun, the Armenian service of the U.S.-funded outlet RFE/RL.

Opponents of the amendment have expressed concerns that the law may be used to stifle criticism of the government. Independent lawmaker Sofia Hovsepyan, for instance, noted that the opposition regularly criticizes the ruling Civil Contract party through insults, such as by calling Pashinyan a “traitor” and “capitulator.”

Opposition lawmaker Naira Zohrabyan has also voiced worries that the law may be used to silence opposition politicians’ criticism of the government.

But Vladimir Vardanyan, who introduced the amendments and serves as the chair of the legislature’s Standing Committee on State and Legal Affairs, dismissed such concerns, saying that the law was intended to tackle vulgarity and obscenity in Armenian politics and on Armenian social networking sites.

“This bill is primarily aimed not so much at punishing individuals resorting to grave insults as having a preventive impact and eliminating insults from our society,” he said.

In March, the National Assembly passed a set of amendments to the Civil Code that would have substantially raised the maximum damages for insult and defamation.

That legislation was roundly criticized by domestic and international press freedom advocates alike, who expressed fears that the changes would have a chilling effect on press freedom in the country.
Under pressure from numerous civil society groups, President Armen Sarkissian decided not to sign the bill into law and instead sent it to the Constitutional Court for further review. The Constitutional Court is scheduled to hear the case on October 5.

What should Armenia’s new ministers prioritize?