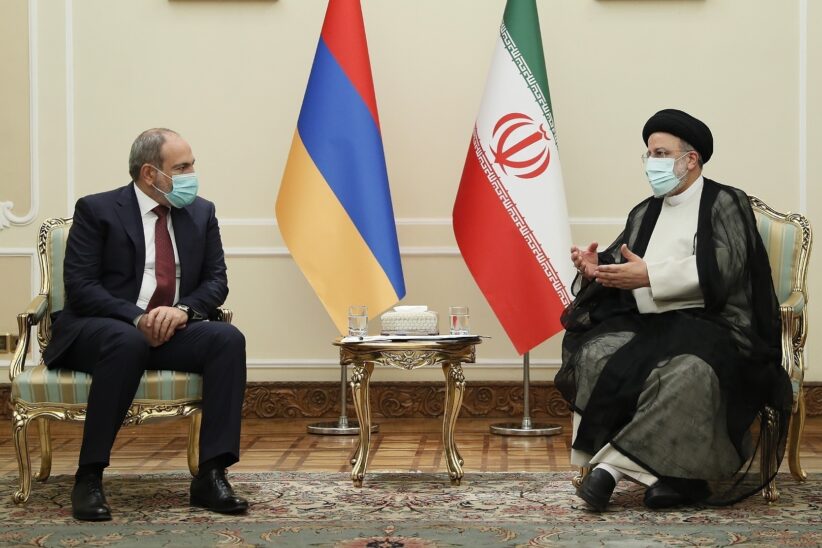 Prime Minister Nikol Pashinyan has arrived in Tehran to attend the inauguration ceremony of the newly-elected Iranian President Ebrahim Raisi, set to take place on August 5.

Pashinyan met with Raisi and discussed a range of issues regarding the expansion of Armenia-Iran relations.

Meanwhile, Azerbaijan’s delegation to the inauguration ceremony consisted of Sahiba Gafarova, the speaker of the Azerbaijani parliament, as well as Deputy Prime Minister Shahin Mustafayev, and one deputy foreign minister. Both the Azerbaijani president and prime minister will not be in attendance.

Pashinyan arrived at Tehran’s Mehrabad Airport, where an official welcoming ceremony took place, he then traveled to the Presidential Palace where was welcomed by Raisi.

Pashinyan thanked Raisi for the warm welcome and once again congratulated him on being elected president. Pashinyan stressed that friendly relations with Iran are of utmost importance to Armenia, which is anchored in mutual respect.

“The fact that I am here today testifies to our commitment to deepen relations and strengthen cooperation between Armenia and Iran at the highest level,” said Pashinyan.

In the context of strengthening bilateral ties, Pashinyan highlighted the role of the Armenian community of Iran and thanked the Iranian government for assuring that the identity, history and traditions of the community are preserved.

The two leaders discussed a number of issues related to strengthening trade and economic ties, including the Meghri free economic zone, a recently launched free economic zone on the Armenia-Iran border, as well as the possibility of Iran gaining access to markets of the Eurasian Economic Union, a Russian led economic bloc of which Armenia is a member.

Pashinyan furthermore welcomed Iran’s interest in the North-South highway infrastructure project, a large-scale infrastructure project that will connect Armenia’s border with Georgia in the north to the border with Iran in the south. Pashinyan added that the Armenian government is ready to discuss the possibility of Iranian construction companies participating in the construction of the Sisian-Meghri section of the North-South highway.

In terms of the energy sector, Pashinyan and Raisi discussed the construction of a 400KW transmission line between the two countries, as well as the increase of gas and electricity exchange.

At the end of the meeting, both leaders instructed the heads of the relevant departments to work closely to further advance Armenia-Iran cooperation.