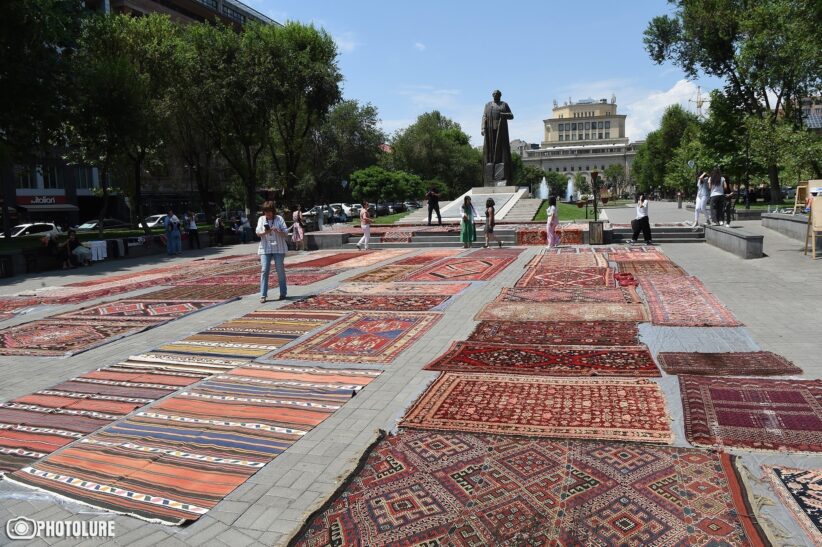 Rugs brought from Artsakh are placed in the sun near the statue of Garegin Nzhdeh in Yerevan, Armenia

Countries, just like people, will experience the five stages of grief after a significant loss. 2020 was a challenging year for all nations. COVID – 19 pandemic and economic downturn have negatively impacted almost everyone. It was an exceptionally difficult year for Armenia because, besides the pandemic, defeat in the war launched by Azerbaijan against the unrecognized Nagorno Karabakh (Artsakh) Republic in autumn 2020 resulted in significant material and human losses. In the first half of 2021, Armenia grasped domestic political instability, triggering an early parliamentary election in June 2021.

Meanwhile, the year 2020 was not the worst in the millennia-long history of the Armenian nation. Armenians survived much more formidable challenges, including the 1915 Genocide perpetrated by Ottoman Turkey and the subjugation of our first Republic by Soviet Russia. Given the historical legacy, one may assume that Armenians can overcome current problems and pursue the path of development and stability.

The five stages of grief model (or the Kübler-Ross model) postulates that those experiencing grief go through a series of five emotions: denial, anger, bargaining, depression, and acceptance. Armenians as a people and nation need to understand the five stages of grief and how to move to stage five – Acceptance and Hope. There are five widely accepted stages of grief used by therapists to help grieving individuals cope with traumatic loss.

The challenge is that Armenia has faced so many such losses and with such frequency that we as a society have never quite reached stage five – Acceptance and Hope. Different people have reached different stages, but society, even before the 2020 Artsakh war, was transformed into the ongoing process of pointless self-criticism and torture. If the entire nation indulges in the self-perpetuating circle of disappointment, this is the path for future declines and tragedies. Thus, Armenian society needs to find a path to stage five of Acceptance and hope, stop complaining, and cease blaming others for their problems.

In order to reach a stage of hope, acceptance must precede it. Here are some geopolitical realities that Armenia and Armenians must come to accept if they want to move forward.

It is very easy to accuse the West of not protecting democratic Armenia against authoritarian Azerbaijan and Turkey, blaming Russia for not fulfilling its treaty obligations, or finding traitors in all political forces. This might be politically, strategically, globally preferable in the big picture of human development. However, this is not the way the international community chooses to operate at this time, and this non-stop process of self-scourging takes enormous resources and makes it more complicated, if not impossible, to concentrate efforts on the future. Meanwhile, Armenia faces both challenges and opportunities and should concentrate its efforts to overcome the challenges and multiple the opportunities.

As the first step toward a brighter future, some basic assumptions should be made. Armenia should accept that as a result of the November 10, 2020, tripartite statement, Karabakh was transformed into a Russian protectorate and will remain as such in the foreseeable future. At least for the coming decade, Armenia has no resources to bring back lost territories through the war or diplomatically force Azerbaijan to withdraw from some lands. Russian troops will remain in Karabakh as long as the Kremlin views it appropriate regardless of what Armenia or Azerbaijan think about such prospects. Thus, the critical task for Armenia in the coming decade is to prevent a significant reduction in the number of Armenians living there. Anything else is unrealistic and beyond Armenia’s capacities and capabilities. Others may disagree, but this appears to be the most pragmatic approach.

Armenia should consider that neither the US nor EU member states will establish military bases in Armenia or even kick out Azerbaijani troops from Armenian territory. Russia and Turkey will remain the leading players in the region for the foreseeable future, and Armenia should accept this reality and pursue relevant foreign and security policies. Even Russia will not save Armenia from Azerbaijan if Armenia itself shows no desire to protect its interests and territory. Thus, a modern and robust military remains a priority for the country.

Armenia should clearly understand, accept and build upon the fact that despite the blockade imposed by Azerbaijan and Turkey, Armenian economic development was impressive. Armenia has almost the same GDP per capita as Georgia and Azerbaijan and probably may pass its neighbors in these criteria in late 2023 or early 2024. The IT sector, tourism, agriculture, mining were the main drivers of Armenia’s economic growth in the last decade, and except tourism, they will continue to boost Armenian economic performance. The newly developing sectors, such as export-oriented textile production, may soon enter this list. The problem for Armenians living in Armenia is that millions of their relatives live in wealthy Western countries, such as the US, Canada, EU member states. Thus, Armenians are tempted to compare their living standards with these countries and complain of poverty, while a glance towards many post-Soviet, Asian, or Latin American countries may reveal a much brighter reality.

After accepting the assumptions mentioned above, Armenia needs to concentrate on solving its real problems. Armenia’s economy is in better shape than it could be, but the country needs stable economic growth to stop emigration and pay for reforming and reinforcing its armed forces.

The government should concentrate its efforts on big things – improving infrastructure, stopping the continuous growth of Yerevan, which already accounts for 40 percent of Armenia’s population, raising the level of primary education, and amending the country’s laws and regulations to make it easier to attract foreign direct investments. Government should support the business sector in finding new export markets, by creating dedicated platforms such as ‘Export to EU” or ‘Export to China”.

Meanwhile, private entrepreneurs should increase their productivity without waiting for much direct assistance from the government. The key to the future of Armenia is the further development of small businesses and the IT sector. Despite its impressive growth, it faces tough challenges such as the lack of qualified specialists and insufficient management skills to govern the ever-growing start-up ecosystem. The economy minister recently highlighted that there is a labor shortage. However, he was mocked because Armenia is experiencing a 17% level of unemployment; “How can there be a shortage,” was the popular question. Yet, there truly is a shortage — of skilled, educated technical people. The focus therefore should be on training more people in the regions, outside of Yerevan, and in necessary tech and specialized skills.

Another requirement, a challenge really put before the Armenian IT sector, is the contribution it is expected to make to the defense industry and agriculture sectors. The growing automation of modern warfare makes it necessary to significantly increase the IT sector’s participation in solving defense-related issues. In the agriculture sector, , Armenian IT could — and should — play a decisive role in bringing precision agriculture to Armenia — something that would save resources and increase productivity..

When Armenia reaches Acceptance, we can focus on Hope. We as a society and culture must learn to move off the path of negativity and self-doubt. We should never forget our history and its lessons. Nevertheless, we must also highlight and honor our accomplishments and successes. We must find a path to a positive future and understand we will only create a prosperous and robust Armenia together.

The economic growth is the only way to prevent the immigration of Armenians from both Artsakh and Armenia. The robust economic development will not only boost the living standards of population, but also will create a sound base for modernizing Armenian military and making it again capable to protect Armenia and Artsakh. Thus, the government, political parties, business community and society in general should concentrate their efforts on bringing about quick economic recovery and here the restoration of hope and consumer confidence will play a critical role.