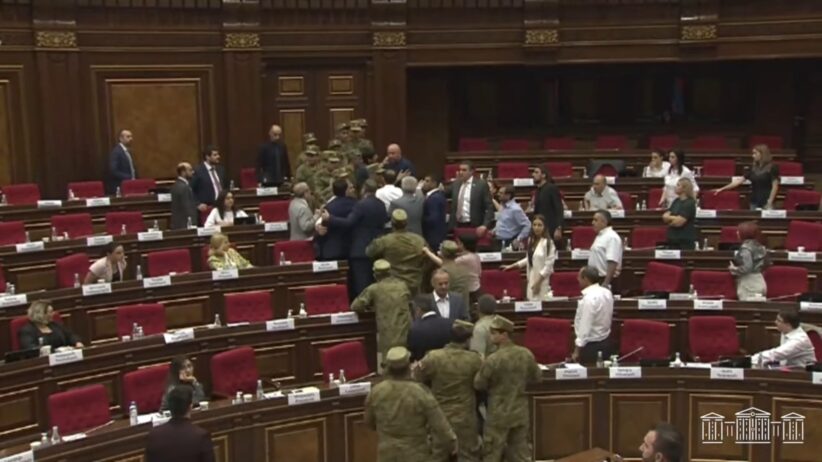 The outbreak of a shouting match on Wednesday between representatives of the ruling Civil Contract party and the opposition Armenia Alliance — less than two weeks into the new parliament’s term — has underlined the acrimonious relations between the government and the opposition, casting the prospect of future cooperation on critical legislation in serious doubt.

Armenia’s new parliament sat for the first time last week following snap elections in June, meant to resolve a monthslong political crisis over Prime Minister Nikol Pashinyan’s handling of the September-November 2020 war with Azerbaijan in and around Karabakh, which resulted in a disastrous defeat for Armenia.

Pashinyan’s Civil Contract party retained its parliamentary majority in that vote, though it lost seats. The new National Assembly, as Armenia’s parliament is officially known, is composed of 71 Civil Contract lawmakers, 29 representatives of the Armenia Alliance, and 7 lawmakers from the I Have Honor Alliance. The vote was deemed “competitive and generally very well-managed” by the Organization for Security and Cooperation in Europe.

Wednesday’s altercation in the legislative chamber began when Vice Speaker Ishkhan Saghatelyan, a leading representative of the Armenia Alliance and a former governor of the eastern Gegharkunik region, said that calling someone a “capitulator” and “land giver” constituted a political assessment and not a personal insult.

Saghatelyan was presumably referring to references by opposition politicians to Pashinyan as a “traitor” and “capitulator,” which have become common in the months since Armenia’s defeat in last year’s Karabakh war with Pashinyan at the helm.

Saghatelyan’s comment prompted Civil Contract lawmaker Narek Grigoryan to begin shouting that such a position was unacceptable. Opposition lawmakers then began yelling back at Grigoryan. The incident escalated such that Alen Simonyan, the head of the legislature, dispatched security staff to break up the quarrel. The shouting match lasted about 20 minutes — and was broadcast live despite attempts by security personnel and Simonyan himself to turn off reporters’ cameras.

Following the altercation, Simonyan gave a speech calling on opposition lawmakers to refrain from making personal insults toward elected officials. “I propose, out of respect for the citizens of Armenia, to consider that today we have exhausted the people’s patience,” he said. In addition, he personally appealed to lawmaker Seyran Ohanyan, who leads the Armenia Alliance bloc in parliament, to “close the page” on such insults.

For his part, Ohanyan called on representatives to “put aside what happened” at the National Assembly on Wednesday. Ohanyan previously served as Armenia’s Defense Minister (2008-2016) and is considered close to former presidents Robert Kocharyan and Serzh Sargsyan, both associated with the Republican Party. The April-May 2018 Velvet Revolution, led by Pashinyan, dislodged the Republican Party from power after decades of rule.

The issue of the opposition’s use of insulting labels for Pashinyan has dominated parliamentary proceedings in recent weeks. During the previous parliament’s final session on July 30, lawmakers approved an amendment to the Criminal Code that would criminalize “grave insults.” Seventy-five out of 132 representatives voted in favor of the bill.

Vladimir Vardanyan, who introduced the amendment and at the time served as the chair of the legislature’s Standing Committee on State and Legal Affairs, said that the law was intended to tackle vulgarity and obscenity in Armenian politics and on Armenian social networking sites. “This bill is primarily aimed not so much at punishing individuals resorting to grave insults as having a preventive impact and eliminating insults from our society,” he said.

But opponents of the legislation have expressed concerns that the law may be used to stifle criticism of the government. Independent lawmaker Sofia Hovsepyan has noted that the opposition regularly criticizes the ruling Civil Contract party through insults, including by calling Pashinyan a “traitor” and “capitulator.”

Observers have criticized the new lawmakers for quarreling with each other, rather than working together to address Armenia’s many problems, not the least of which include ongoing border skirmishes with neighboring Azerbaijan.

Armenia’s male-dominated legislature has long been plagued with an epidemic of verbal abuse and physical violence, highlighting the fragile state of democracy in the post-Soviet republic.