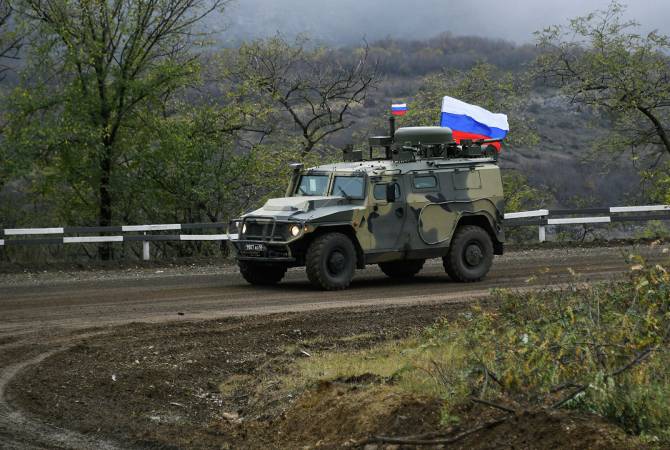 Russia’s Defense Ministry has accused Azerbaijan’s armed forces of violating the ceasefire in and around Karabakh. It is the first time that Russia has directly accused either Armenia or Azerbaijan of violating the Russia-backed ceasefire agreement, in spite of ongoing border clashes between the two countries.

“Over the past 24 hours, one violation of the ceasefire regime was recorded. On August 11 at 7:29 and 7:58, the Azerbaijani armed forces carried out two strikes using strike-type quadcopters on a position of the armed formations of Nagorno-Karabakh in the area of an observation post two kilometers northwest of Yeghtsahogh [village]. There are no injuries,” read a statement published on the Russian Defense Ministry’s website. The term “strike-type quadcopters” refers to military drones.

Though Russia has repeatedly called for restraint by both sides, it is the first time that Russia has directly accused one side — in this case, Azerbaijan — of violating the ceasefire.

The determination comes amid a flurry of activity among Armenian and Russian military authorities. Most recently, Armenian Defense Minister Arshak Karapetyan visited his Russian counterpart, Sergei Shoigu, in Moscow. During the Wednesday meeting, Shoigu stated that Russia is ready to help Armenia modernize its armed forces.

The day before, Nikol Pashinyan held a meeting in Yerevan with Stanislav Zas, the head of the Collective Security Treaty Organization. The CSTO is a military alliance founded in 1994 among Russia, Armenia, and four other post-Soviet states: Belarus, Kazakhstan, Kyrgyzstan, and Tajikistan. The organization’s founding treaty commits signatories to “immediately launch the mechanism of joint consultations” when a member state is faced with a “menace to safety, stability, territorial integrity and sovereignty.”

However, Zas stated in July that Azerbaijan’s May incursions several kilometers deep into the Armenian regions of Gegharkunik and Syunik do not fall under the CSTO charter on collective defense. That determination effectively means that the CSTO would not intervene were similar incidents to occur in the future.

Reflecting rising frustration among Armenian officials over the CSTO’s inaction in the face of ongoing border skirmishes, Karapetyan told Zas that “Armenia’s patience is not limitless.”

Last Friday, Armenia’s Defense Ministry confirmed that Russian border guards had been dispatched to the area around the village of Voskepar in Armenia’s northeastern Tavush region. Voskepar’s location along the highway that connects Yerevan with the Georgian capital of Tbilisi makes it strategically crucial to Armenia’s security.

Large sections of Armenia’s borders are already patrolled by Russian guards, and some observers have taken the move to dispatch Russian troops to Tavush as evidence that Yerevan is continuing to cede its sovereignty to its former rulers in Moscow in exchange for security.

“To make a new life, you must hope for the future and remember what has been”, Carol Edgarian