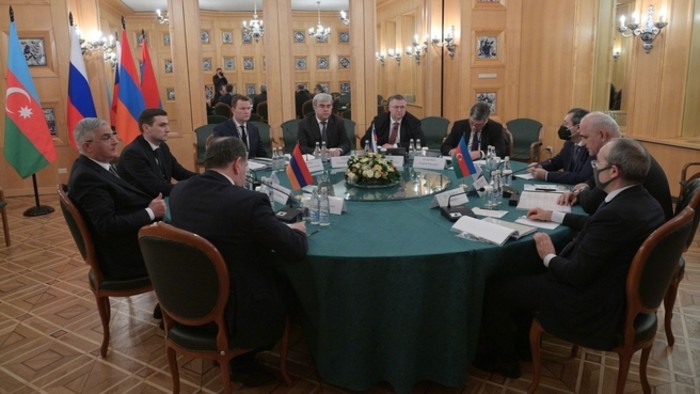 The deputy prime ministers of Armenia, Azerbaijan and Russia, who are leading a working group set up to unblock regional communications infrastructure, met on August 17 in Moscow, after negotiations came to a halt in April 2021 due to tensions on the Armenian-Azerbaijani border.

The establishment of the working group was announced on January 11, 2021 following a meeting in Moscow with Armenian Prime Minister Nikol Pashinyan, Azerbaijani President Ilham Aliyev and Russian President Vladimir Putin. The group, tasked with presenting a proposal to unblock regional transport communications, held its first meeting on January 30.

Azerbaijan, for its part, is seeking to establish a route between itself and its exclave of Nakhichevan on Armenia’s western border. Azerbaijan sees this corridor passing through the southern Armenian region of Syunik. Armenia, in turn, is seeking two land routes, one through Nakhichevan to Iran, and another through Azerbaijan to Russia.

The January 11 statement by Pashinyan, Aliyev and Putin called for the working group to submit to all three parties a list of measures to be taken to restore existing infrastructure and build necessary infrastructure facilities by March 1, 2021.

That deadline passed without results as talks were suspended due to the current Armenian-Azerbaijani border crisis which has seen Azerbaijani forces commit border incursions in the Syunik and Gegharkunik regions. So far, seven Armenian servicemen and one Azerbaijani serviceman have been killed.

The resumption of the working group comes amid a backdrop of some developments between the three countries.

On August 12, Armenian Prime Minister Nikol Pashinyan stated that Armenia is ready to restart peace talks with Azerbaijan. Despite this, Azerbaijani President Ilham Aliyev continued to make territorial claims to Armenia proper and even lamented over Russia increasing arms sales to Armenia.

As for Russia, Foreign Minister Sergey Lavrov stated on August 17 that Russian trucker companies could look at Nagorno-Karabakh as a potential future transit route.