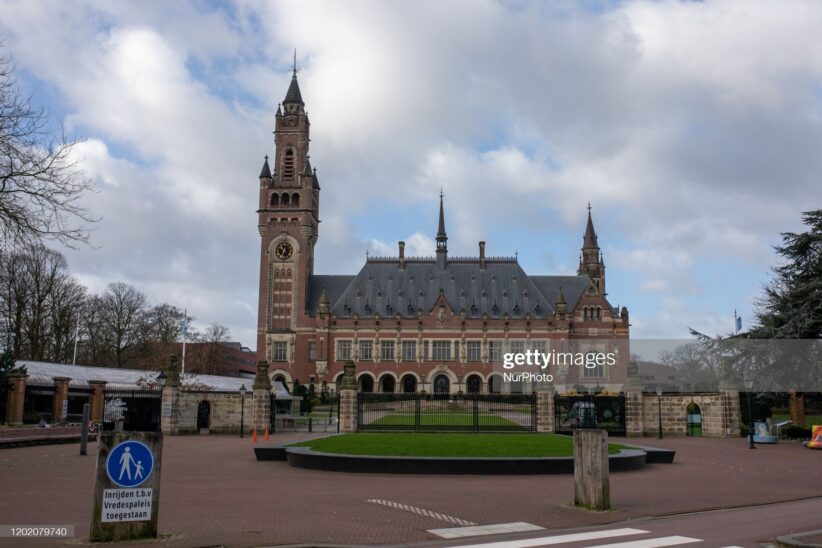 The building of the International Court of Justice in the Hague, Netherlands

Armenia has filed a case at the International Court of Justice insisting that in its treatment of ethnic Armenians, Azerbaijan has violated an international treaty on eliminating racial discrimination, the court said Thursday. It is the first suit involving Armenia or Azerbaijan ever filed with the court.

According to the Hague-based court, Armenia claims that “for decades, Azerbaijan has subjected Armenians to racial discrimination” and that “as a result of this state-sponsored policy of Armenian hatred, Armenians have been subjected to systemic discrimination, mass killings, torture and other abuse.”

The court’s press release specifically mentions Azerbaijan’s actions during last year’s war in and around Karabakh and also contends that, since then, “Azerbaijan has continued to engage in the murder, torture and other abuse of Armenian prisoners of war, hostages and other detained persons.”

The number of Armenians detained in Azerbaijan remains unclear, though it is believed that figure tops 100. A report, published last week by the office of Armenia’s Human Rights Defender, compiled disturbing evidence of abuse and torture of Armenian prisoners of war in Azerbaijan.

The UN treaty at the heart of the proceedings is the International Convention on the Elimination of All Forms of Racial Discrimination (CERD), which commits signatories to prohibit racial discrimination. Armenia acceded to the treaty in 1993, while Azerbaijan signed on in 1996, according to the UN depository.

According to the filing, Armenia is seeking “to hold Azerbaijan responsible for its violations of the CERD, to prevent future harm, and to redress the harm that has already been caused” and has requested the court consider a number of provisional measures “as a matter of extreme urgency.”

Edmon Marukyan, a lawyer and the head of the Vanadzor-based Center for Strategic Litigations, wrote in a Facebook post that such “urgent measures” could include “the return of prisoners of war and detained [Armenian] civilians” held in Azerbaijan. (Marukyan also serves as the leader of the Bright Armenia party, which currently has no representation in Armenia’s legislature.)

However, Thursday’s filing merely indicates that Armenia has “instituted proceedings” against its neighbor and does not necessarily mean that the court has determined it has jurisdiction in the case.

Writing on Facebook, former Deputy Minister of Environment Irina Ghaplanyan nonetheless called the filing a “historic moment for Armenia” and said that the “Baku regime must be held accountable for its state sponsored hatred against Armenians.”

A spokesperson for Azerbaijan’s Foreign Ministry said the country would defend itself in court “robustly” and added that Baku is planning to file a countersuit in the same court within “days” that accuses Yerevan of the same violations.

Azerbaijani Deputy Foreign Minister Elnur Mammadov wrote on Twitter that Azerbaijan’s suit against Armenia would concern “30 years of human rights abuses against Azerbaijanis during occupation” of the territories in and around Karabakh.

The International Court of Justice, sometimes called the World Court, is the UN’s principal judicial organ and settles disputes between countries. Since its creation after World War II, the court has heard less than 200 cases.