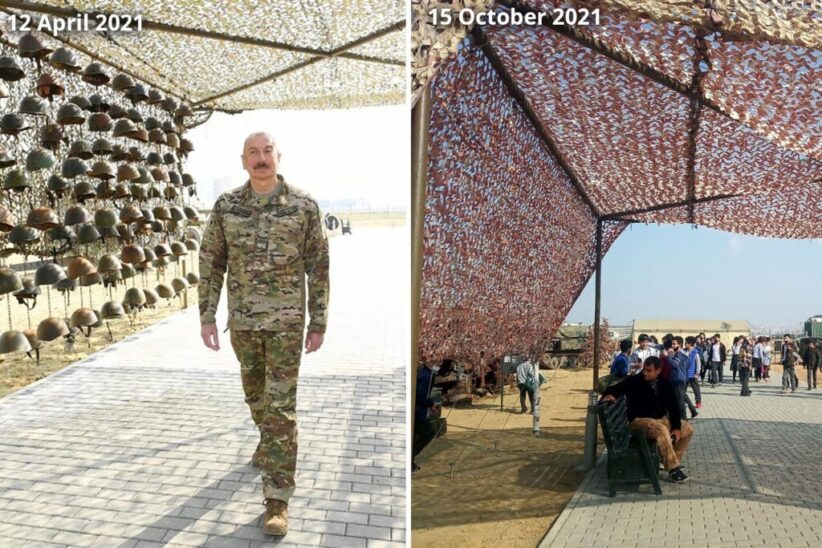 Mannequins of soldiers with bloodmarks and helmets of fallen Armenian servicemen on display at the Military Trophies Park in Baku have been removed following a complaint by Armenia at the International Court of Justice (ICJ). The news was announced Friday by Yeghishe Kirakosyan, the attorney representing Armenia in the case against Azerbaijan.

“The Azerbaijani side has confirmed that the mannequins and helmets have been removed. It is worth noting that this was done after Armenia filed the lawsuit against Azerbaijan in The Hague,” Kirakosyan added.

The War Trophies Park in Baku, also known as Military Trophy Park, is a public museum that opened its doors in April 2021.

The park caused outrage among the Armenian public, international journalists and human rights organizations for its display of helmets of dead Armenian servicemen and mannequins of Armenian soldiers that had visible injuries and bloodmarks.

Other mannequins on display were chained up in cells, which many saw as a reference to the Armenian POWs who still remain captive in Azerbaijan since the end of the 2020 war.

The Armenian side is demanding that the park be closed completely.

On September 16, 2021, Armenia filed a lawsuit against Azerbaijan, citing violations of the International Convention on the Elimination of All Forms of Racial Discrimination. Armenia has asked the International Court of Justice to consider an urgent motion. Azerbaijan in turn has filed a counter case.

The Armenian side is demanding that Azerbaijan repatriate all remaining Armenian detainees, and cease destroying historical, religious and cultural heritage in and around Karabakh.

The International Court of Justice in The Hague began hearings of the case “Armenia v. Azerbaijan” on October 14.