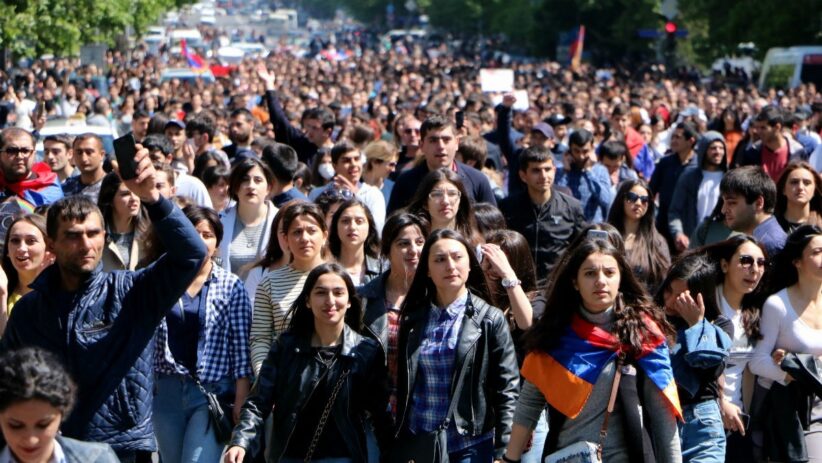 The photo above is from the 2018 “Velvet Revolution”. Young women marching in the first rows. They were convinced that, regardless of anything else, they had come out to the streets in the name of equal rights, equal opportunities, equal pay, equal everything. They were agents of change.

Three years on, in Armenia’s post-revolutionary government, there is only one female member. There are no women in the parliamentary leadership. This is not a “technical” or “bureaucratic” problem․ This is a problem of values, of worldviews, which, unfortunately, is not limited to this example.

Three years on, it seems that we have moved far away from the values that the hot winds of change brought us in 2018.

It turns out that Civil Contract deputies Khachatur Sukiasyan and Gurgen Arsenyan are not really businessmen, just as Samvel Aleksanyan, Gagik Tsarukyan and the other pillars of the previous government were not. How could they be? Members of parliament are not supposed to be engaged in business activities.

It turns out that we do not particularly need judicial reforms, and it is completely normal that the Supreme Judicial Council is headed by Gagik Jhangiryan – a man well known for his record of judicial abuses.

It turns out that former president Serzh Sargsyan’s picture could be thrown out of police stations and banned in offices, but the image of the great leader Nikol Pashinyan is now quite welcome, hanging over the heads of Bolshevik revolutionaries. As Minister of Justice Karen Andreasyan said, “The image of the head of state is symbolic.” What a just statement from the justice minister! And there is no vaccine against this obsession. It has already metastasized throughout the entire state system.

It used to be called corruption when companies owned by relatives or friends of government officials were the winners of public tenders. Now, they call it a result of fair competition. And it’s quite accidental that parliament president Alen Simonyan’s brother’s company won a major public tender. And here there is perfect harmony within the government․ Deputy Prime Minister Suren Papikyan, viewing these occurrences from his high podium, does not see a corruption risk in the executive branch.

It turns out that President Serzh Sargsyan should not have gone to the German resort town of Baden-Baden; that is now the object of criminal prosecution. But, it is perfectly legitimate for the country’s chief legislator, the head of parliament Alen Simonyan, to sizzle in the hot waters of the Mediterranean before the one year anniversary of the Karabakh War and its 4,000 dead, some of whom have yet to be found and buried. This is the new standard of morality in post-revolutionary Armenia.

Last month, when the government bullied its way towards control of 25% of the shares of the Zangezur Copper and Molybdenum Combine, the largest business enterprise in Armenia, it turned out that was a positive achievement. The transparency and accountability promised to the proud citizens are no longer relevant.

It turns out that parliament deputies can increase their own salaries and justify them as “official / operational” expenses, yet there are no measures to account for how that money is spent.

It turns out that Armenia’s legislators can congratulate themselves on wasting the nation’s independence with an additional bonus. This is the new height of ethics and morality.

All this, of course, is nothing compared to the historical catastrophe brought upon Armenian statehood by a leadership that was incompetent in foreign and security policy.

In any case, continue the series on value degradation yourself.

US Senate to provide $2 million for demining in Nagorno-Karabakh