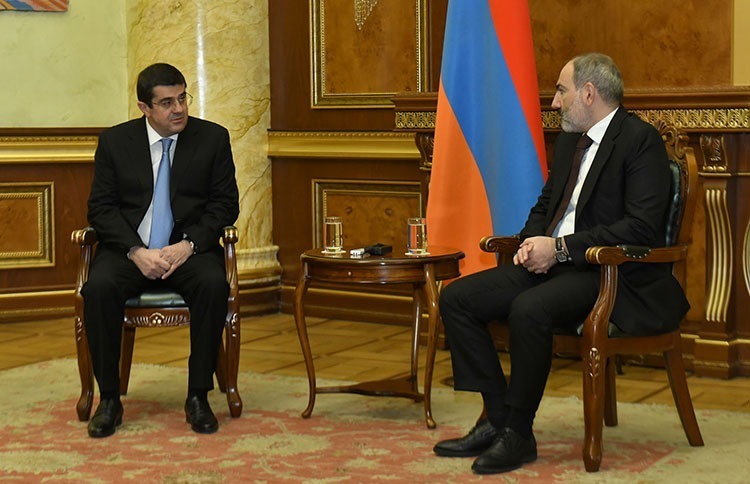 Armenian Prime Minister Nikol Pashinyan met on Wednesday with Arayik Harutyunyan, the president of Karabakh. The two leaders gathered in Yerevan, the Armenian capital, to discuss the socioeconomic situation in the region.

“It can be stated that, during this period [since the war’s end], the government of Artsakh, together with the government of Armenia, managed to carry out very concrete work to restore normal life in Artsakh,” Pashinyan said. “Of course, we do not consider what has been done to be satisfactory, and we, of course, must continue to work in that direction.”

In the course of 44 days of fierce fighting last year, Azerbaijani troops captured broad swaths of territory previously controlled by Armenian forces. The conflict left over 6,000 dead and thousands more injured on both sides, as well as tens of thousands displaced.

Since the end of the war, neither Pashinyan, nor any other top Armenian leader has visited Karabakh. All official meetings between the two governments take place in Yerevan.

During Wednesday’s meeting, Harutyunyan noted that “we are already reaping the first fruits as a result of large-scale work” to rebuild Karabakh. He said that the authorities in Karabakh expect to finish construction on at least 300 apartments in Stepanakert, the region’s capital, by the end of the year, with an additional 2,500-3,000 apartments slated to be built in 2022.

“I would also like to thank you for the fact that a large amount of money [for Karabakh] has been reflected in the state budget of Armenia for 2022,” Harutyunyan told Pashinyan. Harutyunyan said he is confident that the money will be sufficient for the authorities in Karabakh to “completely solve the housing, necessary infrastructure, and social problems.”

Despite the signing of last year’s ceasefire agreement, tensions between Armenia and Azerbaijan over Karabakh remain high. Clashes between the two sides continue to break out periodically in and around Karabakh and along the Armenia-Azerbaijan border, which officially remains undemarcated and undelimited.

Pashinyan also touched on the issue of Karabakh’s status at his meeting with Harutyunyan, saying that “we consider it necessary to resume the full negotiation process within the framework of the OSCE Minsk Group.” He also called for the Karabakh conflict to be settled “on the basis of well-known principles, including the right of nations to self-determination.”

The Minsk Group was formed by the Organization for Security and Co-operation in Europe in the 1990s and is meant to encourage a peaceful resolution to the conflict between Armenia and Azerbaijan. It is co-chaired by France, Russia, and the United States.

France, Russia, and the United States, which co-chair the Minsk Group, have repeatedly stressed the need to resolve the conflict over Karabakh according to three basic principles: “non-use of force, territorial integrity, and the equal rights and self-determination of peoples.”

The lessons not learned from the 2020 Karabakh War