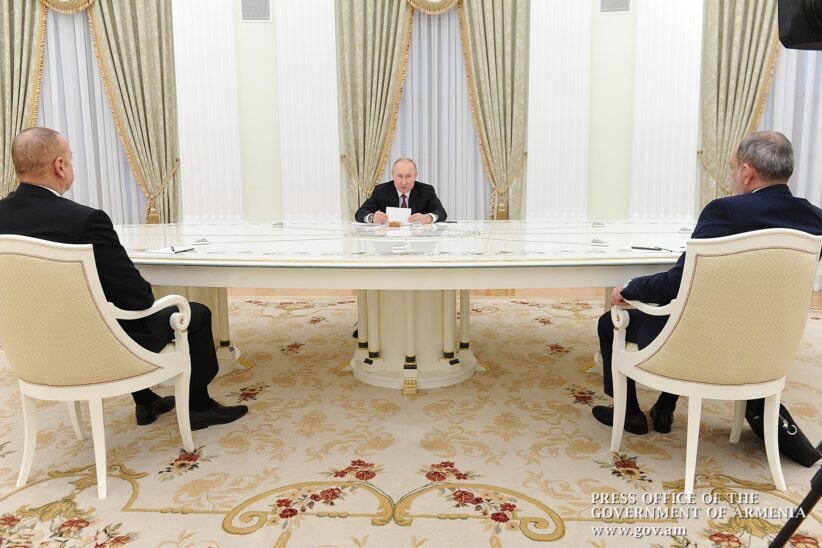 Late in the evening on November 19, it became known that the President of the European Council, Charles Michel, held telephone conversations with Armenian Prime Minister Nikol Pashinyan and Azerbaijani President Ilham Aliyev. During the talks, the leaders of both countries agreed to meet on the sidelines of the Eastern Partnership summit scheduled for December 15. Earlier that day, Russian Foreign Minister Sergey Lavrov said that the meeting of the heads of Armenia and Azerbaijan will take place in the future, but first, consensus on certain issues is needed.

During the 2020 Karabakh war and after it, Russia has assumed the role of the main mediator between Armenia and Azerbaijan. It was expected that on the anniversary of the end of the war, on November 10 or at least sometime between November 8 and 12, a trilateral meeting of the heads of Armenia, Azerbaijan and Russia would take place, as stated by the press secretary of the President of Russia Dmitry Peskov. However, on November 7, in an interview with the Armenian Public Television, the Prime Minister of Armenia stated that no such agreement had been reached, and so far a meeting in Moscow is not scheduled.

Shortly after the “breakdown” of the rumored meeting, on November 11, Azerbaijan placed customs check-points on the Goris – Kapan road in Armenia’s Syunik region, and on November 16, an Azerbaijani attack was carried out near the same area, which became the biggest military clash between the parties since the 44-day war.

As a result of the Azerbaijani attack, the Armenian side suffered more than two dozen deaths, new losses of military positions and territories, and more soldiers were taken as POWs. Armenian authorities stated that they would appeal to Russia, its strategic ally, for assistance to restore its territorial integrity. But Russia, and its Collective Security Treaty Organization (CSTO) say they have not received any official communication from Armenia.

To unpack these issues, CivilNet talked to Benyamin Poghosyan, political analyst and the Executive Director of the Political Science Association of Armenia.

CivilNet: It is known that Moscow has assumed the role of the main mediator in the Armenian-Azerbaijani conflict. However, in the November 16 attacks, Armenia did not receive the support of Russia or the CSTO, although, in the end, it was Moscow that brought about a ceasefire. There were rumors that Russian President Vladimir Putin had urged Nikol Pashinyan not to start a written procedure to seek military assistance from Russia. How close is this statement to reality?

Benyamin Poghosyan: We know that Armenia did not appeal to Russia or the CSTO through relevant procedures. Verbal statements cannot be considered legal. Any military-political union has clear legal procedures for starting such a process.

CivilNet: The chairman of the Commission on Foreign Relations of Armenia’s National Assembly, Eduard Aghajanyan, recently stated that on May 14, 2020, during Azerbaijan’s previous invasion of Armenia, Yerevan had submitted a written appeal to both the CSTO and Russia, but “the subsequent actions did not meet Armenia’s expectations.”

BP: Even if Armenia had applied on May 14, 2020 and did not receive assistance, applying to the military-political alliance for assistance now assumes concrete procedures. The televised statement of Armenia’s Secretary of Security Council is in no way a basis for starting the relevant process.

In addition, many questions remain unanswered by Armenian authorities. For example, how come approximately the same units of the Armenian army located in the same area of Syunik region gave up their positions without any resistance on November 14, and on November 16 they put up a fierce resistance? We are talking about the same divisions that are located in the same geographical location and are almost the same. There is only one logical explanation: on November 14 there was an order to surrender positions without resistance, and on November 16 there was an order to resist with all available means. It is almost impossible that these orders were not agreed with the prime minister.

That’s why it is primitive to blame Russia for all this.

CivilNet: Is the Brussels meeting an attempt to somehow balance Russia’s mediation role by involving the United States and Europe in the framework of the OSCE Minsk Group?

BP: The Minsk Group faces several serious problems. It has not yet started the process of developing new proposals to present to the parties in the future. At the same time, if in their post-war initial statements the Minsk Group co-chairs were stressing a settlement based on the well-known and already established principles, in recent statements, that is absent. Perhaps the co-chairs also understand that the principles and basic elements developed since 2004 and presented to the parties in Madrid in 2007, do not correspond to the new status quo formed after November 10, 2020.

I do not know if there is any work on the part of the co-chairs to develop new principles. And until the co-chairs have submitted proposals, their activities cannot be effective, even if there are meetings and statements made by them.

CiviNet: Few days ago, Russian Foreign Minister Sergey Lavrov said that the meeting between the heads of Armenia and Azerbaijan will take place, but first, consensus on certain issues is needed. A few hours later we learned that this meeting would take place, but under the auspices of the European Union – in Brussels. Can we say that it was a demarche against Russia from the Armenian side, since Armenia did not receive the expected military support from Russia?

BP: At the very least, the meeting in Brussels can be perceived as a fact of weakening of Russia’s position in the mediation process. We have grounds to assert that the November 9 rumored meeting in Russia was postponed or canceled at the request of the Armenian side. But we all understand that it is unlikely that any document on demarcation and other issues will be signed in Brussels. Moreover, Prime Minister Nikol Pashinyan stated that he had received and was ready to accept the proposals of the Russian Ministry of Defense to begin the process of demarcation and delimitation of the Armenian-Azerbaijani border. Therefore, the process is still under Moscow’s control at the moment.

Armenia says it agrees with the proposal of the Russian defense ministry. On the other hand, there is no reaction from the Azerbaijani side. It can be assumed that Moscow had already received Baku’s agreement on this. The delimitation and demarcation of the border is a bilateral process, and no process can take place without the consent of the Azerbaijani side. There is also no reason to claim that the proposal of the Russian Defense Ministry differs significantly from the document that was to be signed at the meeting in Moscow on November 8-12.

Chairman of the Armenian National Assembly Commission on Defense and Security Andranik Kocharyan stated that the demarcation process and the principles underlying it should be confidential, while the document to be signed in Moscow will be available to the public. If this statement is an official position, it turns out that due to the events of the last two weeks, the public document on the delimitation and demarcation of the border has been replaced by a secret process.

CivilNet: If Armenia refused to participate in a meeting on November 10 because the alleged documents did not satisfy its interests, then what has changed now?

BP: The contents of these documents have not been published. If they really contradicted the interests of the Armenian side, then why did Yerevan give preliminary consent to the meeting, that is, to the preliminary version of the text? Who wrote this text and why was a document contrary to the state interests of Armenia? What has changed that the Armenian side, firstly, agreed to sign them, and then actually refused, offering to cancel or postpone the meeting? What levers were used against us to obtain consent to a document that is contrary to the interests of Armenia? These are important questions.

CivilNet: On November 7, Prime Minister Nikol Pashinyan stated in an interview with the Armenian Public TV that “we are not against meetings, but the context of these meetings, the symbolism of these meetings, and the potential result expected from these statements are very important.” Is it possible to say that there was a proposal from the Armenian side to postpone or cancel the meeting?

BP: Obviously, there was an agreement to hold a trilateral meeting in Moscow, otherwise the speaker of the President of Russia could not announce the meeting and specify certain dates. The interview that Pashinyan gave gives grounds to assert that Armenia really offered to postpone or cancel it. After that, we saw the tough steps of the Azerbaijani side: on November 11, the installation of a customs point on the Goris-Kapan road; on November 14, the capture of several Armenian positions in Syunik without Armenian resistance; on November 15, the customs point on the Kapan-Chakaten section. As a result, several Armenian villages were almost completely blockaded, and the most serious clash was on November 16.

CivilNet: The message distributed by the European Union notes that the leaders of Armenia and Azerbaijan have agreed to establish direct communication at the level of defense ministers, which will serve to prevent incidents.

BP: Direct communication is not news. The last time such an agreement was reached in September 2018, at a meeting of the leaders of Armenia and Azerbaijan in Dushanbe. Prior to that, there was communication between the Ministries of Defense, although not necessarily at the ministerial level.

The interview was conducted by Karen Harutyunyan