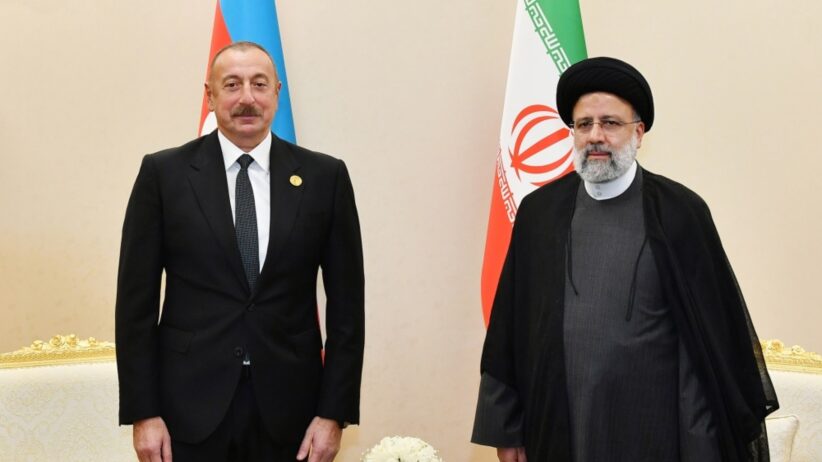 Eldar Mamedov, an adviser for the Socialists & Democrats groups in the European Parliament, speaks to CivilNet’s Emilio Luciano Cricchio, in a personal capacity, about the impact of the latest tensions between Iran and Azerbaijan.

Emilio Cricchio: Azerbaijan has put customs check-points on parts of the road, which link the Armenian cities of Goris and Kapan. Those sections of the road pass through Azerbaijani controlled territory. The previous closure of this road and the arrest of Iranian truck-drivers triggered tensions between Iran and Azerbaijan. How do you think Tehran will react this time?

Eldar Mamedov: The truck drivers were released, and Tehran committed to not let its trucks go to the Nagorno-Karabakh territory. So, Baku feels it has “won”. However, Tehran also decided that it would prefer Armenia, and not Azerbaijan, as its preferred route for north-south trade. It’s a political decision that shows a displeasure with Baku, and signals Iran’s intention to balance Azerbaijan off in the long run.

EC: In the last few months, there has been a lot of talk about tensions between Azerbaijan and Iran. There were military drills on the new Iran-Azerbaijan border. There were sabre rattling statements out of both Baku and Tehran, even the office of the representative of Iran’s Supreme Leader in Baku was closed. But, has the situation deescalated, it seems Azerbaijan-Iran tensions aren’t in the headlines as much. Was this just an episode or something that will continue into the future in your opinion?

EM: It is true that the tensions have dissipated, but long-term relations will remain volatile. Not only was Iran’s Supreme Leader’s office closed in Baku, but also a number of Shia clerics were detained, one of them charged with treason, and a number of Shia religious websites were closed for their supposed “association” with Iran – even though the evidence for such things is rather flimsy. Azerbaijani pro-government media outlets continue pouring anti-Iran rhetoric.

On the other hand, in Iran there is a growing awareness of the challenge of Azerbaijan, its close relations with Turkey and Israel, and what resurgent irredentism concerning so-called “southern Azerbaijan” (Iran’s northern provinces) presents for Iran. There is growing political pressure from sectors of society, diplomatic, intellectual and security environments to take the “pan-Turkist” threat to Iran seriously. It is noteworthy that Iranian Azeris are often at the vanguard of such demands. Many of them don’t see Baku as a beacon to which they should strive to “liberate themselves from the Persian yoke”, as Azeri ethno-nationalists would have it, but to the contrary, they see it as a renegade territory that should “rejoin the Iranian motherland”, from which it was separated as a result of the Russo-Persian wars in the early 19th century. The growing prominence of such narratives is a new phenomenon which is a direct consequence of the latest spat between Iran and Azerbaijan.

EC: How does Azerbaijan’s ruling elite and population view Iran in the context of the conflict between Armenia and Azerbaijan. Is Iran viewed as pro-Armenia?

EM: The ruling elite and associated journalists and opinion leaders share a negative outlook on Iran. Not only do they see Iran as essentially pro-Armenian, but also as an embodiment of everything they, the elite, don’t want to be: “oriental”, Persian, overtly Muslim and Shia. A combination of the Turkic ethnic nationalism, militant secularism and remnants of Soviet modernism that used to see Iran as a backward society predetermine the views of the Azeri elite on Iran. This attitude is also evident in attempts to minimize historical Iranian influence on culture in the Republic of Azerbaijan, including appropriating the Iranian poet Nizami Ganjevi who happened to live on the territory of contemporary Azerbaijan in the 12th century but wrote in Persian, using a musical instrument called the tar, etc.

The attitudes of the broader population are more difficult to gauge as there are no credible sociological surveys in Azerbaijan. It would be fair to suggest, however, that especially outside Baku, attitudes are not that hostile. In the villages around Baku and in the south of Azerbaijan there are still pockets of devout Shia believers who may not all sympathize with Iran’s policies, but do not share the strongly negative outlook of the elites.

EC: How do Iranian and Azerbaijani societies perceive each other? What about the Azeri population of Iran? Are they culturally more closer to Azerbaijan or to Iran?

EM: What the latest crisis exposed is the little mutual interest and appreciation beyond the cliches. Many in Azerbaijan have difficulty understanding why Iran, for example, has relations with Armenia and why they are important for Tehran, and the reality and historical rootedness of the Armenian community in Iran. Many in Baku just assume that Iran as a Muslim country should simply automatically and unconditionally side with them in their conflict with Armenia.

Conversely, while on the official level Iran has accepted the existence of the Republic of Azerbaijan as an independent state, there is little understanding and curiosity as to what drives its foreign policies and choice of allies. Iran has irrevocably lost the soft power struggle over Azerbaijan to Turkey. The Islamic Republic’s system of governance is not attractive to the majority of people in the Republic of Azerbaijan. In part due to American sanctions, Iran is also not seen as a promising economic partner too.

At the same time, there is booming medical tourism from Azerbaijan, particularly southern regions, to Iran. Which is quite ironic: people from the ostensibly “modern”, secular society going to the supposedly “backward” Islamic Republic for the simplest of medical operations.

As to the Azeri population of Iran, culturally it would be fair to say they are indistinguishable from other ethnic groups in Iran, chiefly Persians. While they share the language with their co-ethnic group on the northern side of the Araz river, their culture was shaped by the fact that they remained part of Iran after the Russo-Persian wars in the 19th century.

EC: Many Iranian officials made references to Azerbaijan’s relationship with Israel. How does Israel fit into this dynamic between Iran and Azerbaijan?

EM: Azerbaijan’s ties to Israel are clearly a key irritant in bilateral relations. Iranian officials believe, for example, that Azerbaijan aided Israel in assassinating the nuclear scientist Mohsen Fakhrizade in 2020. The perception of Israel expanding its hold in Azerbaijan after the Second Karabakh War in 2020 is a major concern for Iran, and one of the reasons for the recent spat between Tehran and Baku.

EC: You wrote an article, in which you said that the United States is encouraging Azerbaijan to stoke tensions with Tehran. You write “an array of Washington think-tanks sought to expand the conflict with Iran,” can you unpack this for us?

EM: I referred to a specific group of Washington think-tank pundits who for years promoted tensions with Iran, rather than the current US government. Many of these think-tanks, like the Foundation for Defense of Democracies (FDD), influenced Trump’s “maximum pressure” campaign against Iran. They are very critical of Biden’s attempts to revive the nuclear agreement with Iran. So, they used the Armenia-Azerbaijan war to try to expand the conflict to Iran. The plan is to get Iranian Azeris excited about Azeri ethno-nationalism and incite them against the government in Tehran. Undermining Iran from within, or ideally, provoking its disintegration along ethnic lines, which would benefit Israel, according to these pundits. And Israel was always at the center of their interest in the Middle East. Azerbaijan, in this context, is seen as a useful tool in achieving these goals.

EC: What do you think is next? You mention in the article that Iran is an expert in asymmetrical warfare, could this be a pandora’s box for Aliyev and his administration?

EM: Indeed, Aliyev’s policies are likely to backfire. Iran will probably keep trying to build up proxies or allies in Azerbaijan. So far it wasn’t very successful in this effort, but it will keep trying. Aliyev, ironically, is facilitating that task for Tehran – by systematically marginalizing the secular opposition, it opens up more space for religiously-oriented ones. Socio-economic difficulties and widespread corruption will continue to increase the pool of the disaffected. The victorious post-war euphoria can, for a while, mitigate these risks for the regime, but not indefinitely. In this context, arresting Shia clerics can be seen as a preemptive step highlighting the government’s sense of vulnerability.

At the same time, the likelihood of bilateral tensions erupting into a full-fledged military conflagration is low – as neighbours, Iran and Azerbaijan share a lot of interdependencies. Recently prospective oil and gas related deals between Tehran and Baku were announced. It shows that, alongside tensions, there are also economic interests that might mitigate them. We have to, however, see the details of these deals more clearly. It happened in the past that Iran and Azerbaijan announced ambitious plans in the economic sphere which didn’t eventually amount to much.

EC: And finally, how do you think Armenia fits into this? There are multiple perspectives in Armenia, some believe that deteriorating relations between Iran and Azerbaijan will align Iran more closely with Armenian interests. Others believe that a new conflict or hostile relationship on Armenia’s doorstep is problematic. What do you think about Armenia’s place in all this?

EM: The Armenian experts are obviously best placed to answer this question, but I think that Armenia has really few good geopolitical options. Relations with Iran, which are traditional and historically rooted, are in any case of strategic interest to the Republic of Armenia independent of the state of Iranian-Azerbaijani relations.

From an Armenian perspective, however, I think it would be a mistake to count too much on Iran’s problems with Azerbaijan in the long term. Relations may be tense and volatile, but there is also an element of interdependence that probably won’t let deterioration go too far.

What, in my opinion, the politically active Armenian diaspora could do in countries like the US or France is to use its influence to join forces with those organizations that promote engagement with Iran. An Iran that is fully “normalized” and integrated into the world economy would improve Armenia’s situation. It, of course, is a delicate balancing act to perform as US relations with Iran are bad, and no one wants to be made a target for supposedly “siding with an enemy”. But there are growing constituencies in the US, from the progressive left to the libertarian right, who are tired of “endless wars”, particularly in the Middle East, and are trying to shape a different US foreign policy in that region – one based on diplomatic and economic engagement rather than military dominance. I think it is in the natural interest of the Armenians worldwide to support that tendency.

SMART Debet Project with Children of Armenia Fund: What changed in the village?