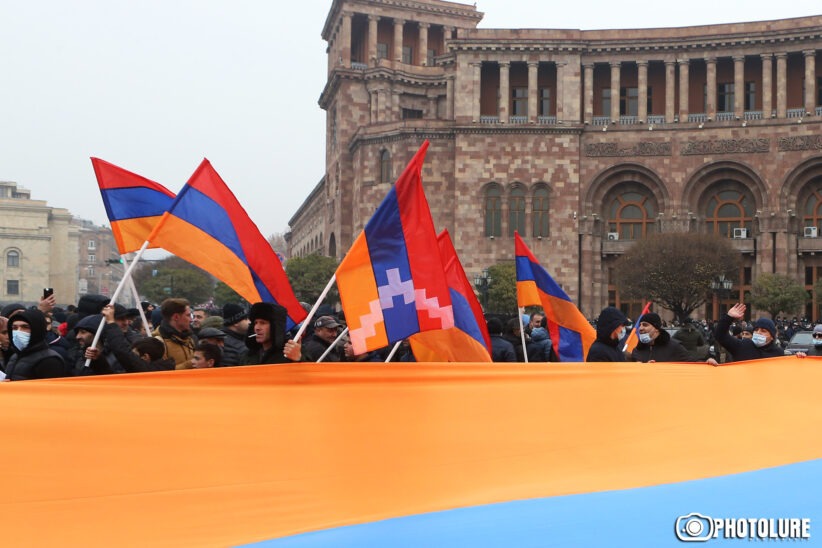 Almost half of those surveyed said they think Armenia is heading in the wrong direction, according to a nationwide poll published Monday by the U.S.-based International Republican Institute.

That is just one major takeaway from the survey, which explored Armenians’ outlook on their country’s future, their attitudes toward public institutions, and their thoughts on Armenia’s foreign policy, among other topics.

The polling data was collected between late November and early December 2021, and the survey has a margin of error of plus or minus 2.5 percentage points.

The 46% of Armenians who said they think their country is heading in the wrong direction represents a striking reversal from attitudes recorded earlier last year. In May 2021, less than half that number — only 20% of those surveyed — said they thought Armenia was on the wrong path.

Security proved to be the top cause for concern for most Armenians, the survey suggests. When asked about major problems they believe Armenia to be facing, 28% of respondents said territorial and border issues were of the highest concern. The next most frequently selected option was national security, at 15%.

Russia dominated questions in the survey that asked Armenians to single out countries they believe to be their closest partners on the world stage. It was the number one answer when respondents were asked to name Armenia’s closest political, economic, and security partner, with over 50% of those surveyed choosing Russia.

In sharp contrast, there was much greater unanimity when it came to naming Armenia’s greatest political, economic, and security threats. Overwhelming majorities of respondents chose Azerbaijan and Turkey in response to all three of those questions; no other country came close.

Nonetheless, very few respondents said they saw improving Armenia’s relations with Azerbaijan or Turkey as a priority “for the development of Armenia” — 4% and 5%, respectively. Instead, large numbers said that Armenia should seek to improve relations with Russia (53%), the United States (35%), Iran (29%), and France (25%).

Still, over 50% of respondents also said they totally or somewhat agreed with statements suggesting that Armenia should begin the process of normalizing relations with Turkey.

The vast majority of Armenians views solving the Karabakh conflict as a top priority, and also rejects the status quo in the region, according to the survey.

Over 80% of those surveyed said that the resolution of the Karabakh conflict is “very important for the future of Armenia in the next 10 years”, and only 1% called the current situation in Karabakh an “acceptable solution” to the conflict.

Instead, the most popular answers to solving the Karabakh conflict involved recognizing an independent republic in the region (35%) or organizing the territory as an entity within Armenia proper (34%).

A further 16% said that making Karabakh an autonomous region within Armenia would be acceptable, while another 11% said Karabakh is better off joining Russia.

Despite gains, concerns over state of democracy remain

Meanwhile, mixed attitudes toward domestic politics and state institutions in the survey suggest that Armenians view their country’s transition to democracy as uneven and incomplete.

On the one hand, the majority of respondents said that they were completely or somewhat satisfied with “the way democracy is developing” in Armenia (51%) and that they definitely or probably believe that everyday people can influence decision making in the country (66%).

Likewise, a clear majority of respondents (66%) answered that people are definitely not or somewhat not afraid of “openly expressing their opinions” in Armenia.

But on the other hand, public dissatisfaction with several key state institutions remains high, the poll suggests.

According to the survey, the National Assembly is the most disliked institution in Armenia, with 67% of respondents saying they were somewhat or very dissatisfied with the legislature’s work.

Several other state bodies were also rated negatively by the majority of those surveyed, including the army leadership (54%), the President’s office (53%), and the Cabinet of Ministers (50%).

On the flip side of the coin, the most popular institutions in the survey were the Human Rights Defender’s office and the police, with each earning the support of 68% of those surveyed.

Other institutions that received satisfactory ratings from the majority of respondents were local governments (63%), the Armed Forces (58%), the Central Electoral Commission (57%), and the National Security Service (50%).

Attitudes toward the Prime Minister’s office appeared split, with 49% of those surveyed supporting its work against 48% of respondents not supporting it.

Monday’s survey was conducted on behalf of the International Republican Institute, a Washington-based nonprofit, nonpartisan organization, by Breavis, a consultancy and market research firm headquartered in Yerevan. Funding was provided by the United States Agency for International Development.

Armenian and Turkish Envoys to Meet Again in Vienna