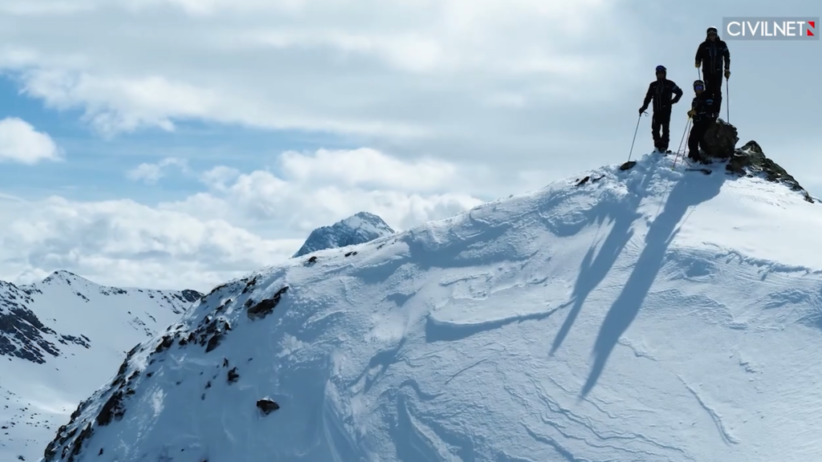 Aragate Investments’ large project to build a high-end ski resort near the southern peak of Armenia’s Mount Aragats has become a point of contention between Armenia and France. CivilNet has learned that the French Ministry for Europe and Foreign Affairs has expressed its dissatisfaction with the Armenian side over the progress of the investment project. According to CivilNet’s source who did not wish to disclose his name, French officials raised the issue of the approval and implementation of the project on December 9, during a session of the Armenian-French Economic Cooperation meeting.

The owner of Aragate Investments is Russian-Armenian businessman Nikolay Sarkisov. The project was to be implemented on the slope of Mount Aragats by the French company Société des Trois Vallées, which is the managing company of the famous Courchevel resort in France.

Ski resort on the slope of Mount Aragats

Aragate Investments began research and negotiations on the ski resort project back in 2019, which was to be implemented on the slopes of Mount Aragats. The company planned to build a high-end ski resort in the Byurakan, Ushi and Aparan communities of the Aragatsotn Province. The resort would include 128 kilometer-long ski slopes, 30 lifts, trainings for winter sports, an artificial snow production system, guesthouses, restaurants and other places of entertainment. In total, the project was estimated to be at least 300 million US dollars. The area required for the project is roughly 5,500 hectares.

Courchevel resort which is managed by Société des Trois Vallées is one of the largest centers of winter tourism. In 2020, the company’s turnover exceeded 60 million euros. For the past few years, the representatives of Société des Trois-Vallées, MDP Consulting, and ESF Ski Schools visited Armenia to explore the area of Mount Aragats. In January 2020, Aragate Investments signed a memorandum of cooperation with Armenia’s Urban Development Committee. The ex-chairman of the committee Vahagn Vermishyan visited Courchevel to learn more about the ski resort.

The main shareholder of Société des Trois-Vallées is the regional council of the Savoy region of France, and this is in fact one of the reasons why various French government agencies are interested in the further progress of the project.

Other investor in the same area

Rid LLC, a company that belongs to Russian-Armenian businessman Ruben Grigoryan, had also submitted an investment project to the Armenian government to be implemented in the same region. Grigoryan is known for his large Russia-based construction company, Rutsog Invest, which has led the construction of several large, multifunctional complexes in Russia.

In May 2021, the Council of Elders of Aparan community approved the project submitted by Rid LLC, which envisages the establishment of an eco-agricultural, touristic and ski resort complex on the slopes of Mount Aragats. This project was planned to cover about 4,000 hectares and would consist of 300 farms, an agricultural market, a reservoir, a ropeway, ski runs, and a hotel. For this project, the representatives of Rid LLC signed a memorandum of cooperation with Armenia’s Ministry of Territorial Administration and Infrastructure. Rid LLC plans to invest 200 million US dollars in the project.

As both companies had in fact submitted investment projects to be implemented in the same area, a commission was set up by Armenia’s Prime Minister Nikol Pashinyan to study and evaluate each one.

Yana Mardiyan, a representative of Aragate Investments, says that they have asked the Ministry of Economy to clarify the conclusion of the interdepartmental commission, including the individual votes of those who voted for and against the project. They were not provided with the requested information. The Ministry of Economy explained that “the commission has only the authority to provide a professional opinion, not to make a final decision”.

France is in contact with Armenia’s Ministry of Economy

The lack of progress on the project led by Aragate Investments has caused concerns in France. The French side raised this issue for the first time at the Armenian-French Economic Forum’s working session, and in the period that followed, it was in correspondence with the Armenian Ministry of Foreign Affairs and the Ministry of Economy. Foreign Minister Ararat Mirzoyan headed the Armenian delegation at the session.

CivilNet had sent a written question to the Foreign Ministry, asking whether the Aragate Investments’ project had been on the agenda at this session, and whether the French side had expressed dissatisfaction with the project to the Armenian side. Serob Bejanyan, Head of the Information and Public Diplomacy Department of the Ministry of Foreign Affairs, responded that “our package presented to the French side for the development of the Armenian-French economic cooperation did not include the project of the construction of the ski resort to be implemented by Aragate Investments company”.

Serob Bejanyan told CivilNet that this project was not discussed during the December 2021 session at all.

The Ministry of Economy, in its turn, informed CivilNet that it had neither received official letters on the project from the French government nor held any discussions about it. Pascal de Thiersant, the Director of Société des Trois-Vallées, meanwhile, claims the opposite. He told CivilNet that the issue was indeed discussed at the working session of the Armenian-French Economic Cooperation, and that currently the French Foreign Ministry is in negotiation with the Armenian Ministry of Economy.

“This is the only real project in Armenia with the participation of well-known French companies that can bring French excellence to Armenia,” Pascal de Theirsant said. He also said that the former French Ambassador to Armenia Jonathan Lacôte continuously supported the project and considered it “the main French investment project in Armenia”.

“We have spent more than 18 months and financial and other resources to discover more on the lands in Aragatsotn Province, as well as to get data on the snow coverage, winds, climate, water resources. We conducted the feasibility study of the area, including estimates for beginner, intermediate, and professional skiers and for other sports activities. The Armenian authorities, including the Urban Development Committee, the Ministry of Economy, the Cadastre Committee, and the Aragatsotn Regional Administration are aware of all this work,” says Pascal de Thiersant, adding that the communication on the Aragate project between the French Ministry for Europe and Foreign Affairs and Armenia’s Ministry of Economy is still going on.

Armenia’s parliamentary opposition will not participate in 2020 war inquiry