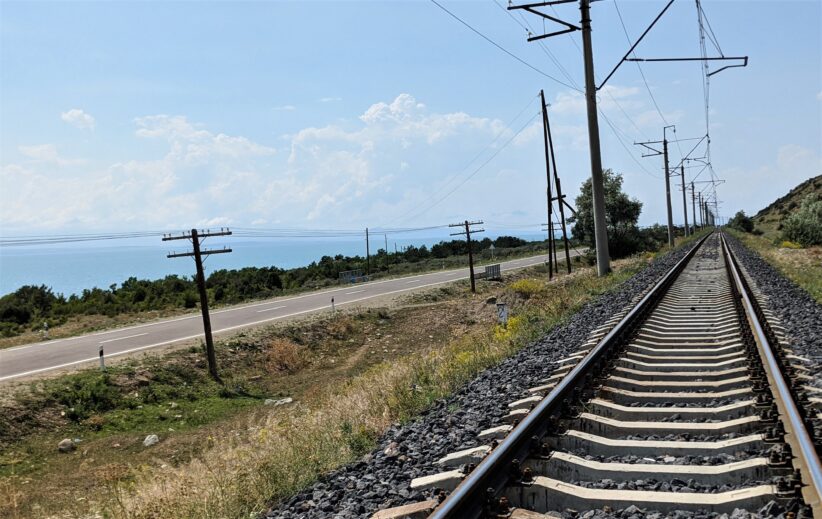 Specialists will begin conducting feasibility studies on restoring one of Armenia’s two shuttered rail connections with neighboring Azerbaijan in the coming days, according to Artashes Tumanyan, the head of an Armenian government working group on rail restoration.

“In about two weeks, maybe 10 days, a professional group will be sent…to conduct specific, technical research,” said Tumanyan, an advisor to Prime Minister Nikol Pashinyan and a former ambassador to Iran, on Monday in an interview with Radio Azatutyun, the Armenian service of the U.S. government-funded outlet RFE/RL.

Tumanyan’s announcement comes several months after Pashinyan and Azerbaijani President Ilham Aliyev reportedly reached an agreement on restoring Soviet-era rail links at a December meeting in Brussels. That meeting built on a previous round of negotiations held the month prior in the Russian resort city of Sochi.

“It was agreed to proceed with the restoration of railway lines, with appropriate arrangements for border and customs controls, based on the principle of reciprocity,” said European Council President Charles Michel after the meeting.

“The EU is ready to support the development of connectivity links” between Armenia and Azerbaijan, he added.

In a cabinet meeting days later, Pashinyan called the restoration of rail links “an important agreement” that could “significantly change the economic, investment, political, and security environment of the region.”

The next month, Pashinyan announced the formation of an Armenian government working group on the issue.

Armenia and Azerbaijan first pledged to unblock “all economic and transport connections in the region” in a November 2020 ceasefire agreement, brokered by Russia, that largely ended hostilities in and around Karabakh. The 44-day conflict left thousands dead on both sides, with tens of thousands more injured or displaced.

Armenia’s borders and transport connections with Azerbaijan and its close ally, Turkey, have been closed since the early 1990s as part of a joint Azerbaijani-Turkish blockade that has devastated Armenia’s economy.

The rail line at the center of the recent negotiations connects Armenia and Azerbaijan via the Azerbaijani exclave of Nakhichevan and Armenia’s southernmost Syunik region. Officially called the Yeraskh-Julfa-Ordubad-Meghri-Horadiz railway, it was built in the 1940s and has been closed since the outbreak of conflict in the region in the 1990s.

If rebuilt, the line would dramatically open up connections in the region. The project would let Armenia establish rail links with Iran and Russia, two major economic partners, the latter via the Azerbaijani capital of Baku.

Currently, most Armenian-Russian trade goes through Georgia, while Armenian-Iranian trade is forced to transit along inefficient and dangerous overland routes in Syunik.

Meanwhile, the railroad would allow Baku to establish an overland connection with Nakhichevan. At present, travelers who wish to transit between the largely isolated exclave and the rest of Azerbaijan must go either by plane or overland through Iran or Turkey.

Eventually, the route could directly connect mainland Azerbaijan with Turkey, a longstanding goal for both countries.

In order to restore the link, the Armenian side must repair two sections of the railroad: one at Yeraskh, an Armenian village on the border with Nakhichevan, and the other across Syunik.

Tumanyan has estimated that restoration work at Yeraskh will take several months, while rebuilding the 45-kilometer section of track that crosses Syunik will take three years.

In December, Deputy Prime Minister Mher Grigoryan said that restoring the Syunik portion of the railroad will cost about $200 million. Tumanyan has yet to confirm that figure or say where the money will come from, but has raised the possibility of “attracting foreign loans” to finance the project.

“The Russian side is ready to discuss this issue, so that they can invest,” Tumanyan said.

Meanwhile, the Azerbaijani government began repairing its sections of the railroad in early 2021, just months after the end of large-scale hostilities in and around Karabakh, and has projected that all restoration work will be completed by the end of 2023.

Even though progress is yet to begin on restoring Armenia’s portions of the Yeraskh-Horadiz line, the project has already come under fire in Armenia amid mounting concerns over its economic viability.

In an interview earlier this month with Radio Azatutyun, Vache Gabrielyan, a former deputy prime minister, cast doubts on the feasibility of using the southern railway to conduct trade with Russia.

“Economically, transferring goods to Russia via Baku is not particularly logical for us at the moment. It used to be our main route during the Soviet era, but then we moved ore, we moved large industrial products, and so on,” he said.

“Now we do not have such products, nor do we implement such technologically large investment projects,” he continued. “It makes much more sense for us to use either the [Georgian Black Sea] port of Poti or the highways” that connect Armenia and Russia via Georgia.

Henrik Kochinyan, a member of the government working group on rail restoration who served as transport minister for much of the 1990s, has hit back against such criticism, saying that it is impossible to know if restoring the southern railway will prove economically viable until cargo traffic restarts.

“If one [person] says it is profitable, and another says it is not profitable, in my opinion both are wrong,” he said, also in an interview with Radio Azatutyun.

Armenia has the technical expertise needed to rebuild the line, Kochinyan added, noting that Russian specialists are also expected to take part in the project.

Since the end of the 2020 war, the Armenian government has consistently maintained that restoring the Yeraskh-Horadiz line, and unblocking regional transport and communication links more broadly, is in Armenia’s best economic interest.

Progress on other rail connections stalls

In sharp contrast to the flurry of activity on the Yeraskh-Horadiz railway, little progress has been made on restoring a second Soviet-era rail link between northeastern Armenia and northwestern Azerbaijan — despite the fact that the November 2020 ceasefire agreement stipulates the unblocking of “all economic and transport connections in the region.”

Built in the 1980s but shuttered in the 1990s, the railroad connects the Armenian town of Ijevan with the Azerbaijani town of Gazakh. If restored, that rail link would provide Armenia with more direct access to Russia than the southern railroad, but also stands to be much costlier to rebuild.

Talks between Armenia and Azerbaijan to reopen rail links have also raised the possibility of restoring the railroad between Gyumri, Armenia’s second largest city, and the Turkish city of Kars. That route, built in the late 1800s by the Russian Empire, was also closed in the 1990s as part of Azerbaijan and Turkey’s economic embargo on Armenia.

Normalizing relations would entail mutual diplomatic recognition and the lifting of Turkey’s blockade on Armenia, though there is little detail on how this would work in practice.

Special envoys Ruben Rubinyan, the deputy speaker of Armenia’s parliament, and Serdar Kilic, a former Turkish ambassador to the United States, are slated to meet again later this month in Vienna.

In the past few months, Armenia has lifted a ban on imports from Turkey and announced the restart of direct flights between the Armenian capital of Yerevan and Turkey’s largest city, Istanbul.

Karabakh says all regions lost to Azerbaijan are defined as “occupied”